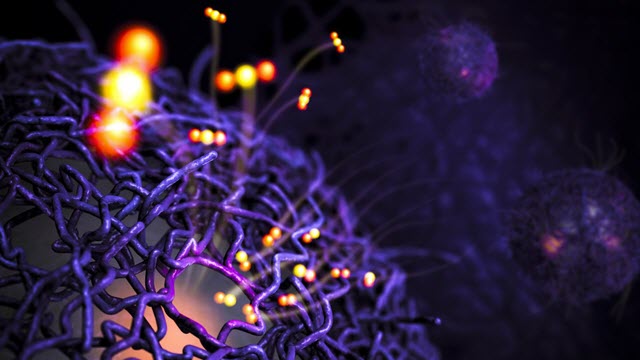 Scientists have invented an enzyme-like catalyst made of soft polymers (purple) and a hard palladium core (pink). When heated, the palladium chemically converts molecules of oxygen and carbon monoxide (yellow and orange) into carbon dioxide (CO2). The reaction stops when the polymers are saturated with carbon dioxide, a strategy used by living enzymes. Research is underway to develop catalysts that convert natural gas to methanol at low temperatures.Credit: Gregory Stewart / SLAC National Accelerator Laboratory

All living organisms depend on enzymes—molecules that speed up biochemical reactions that are essential for life.

Scientists have spent decades trying to create artificial enzymes capable of cranking out important chemicals and fuels at an industrial scale with performance rivaling their natural counterparts.

Researchers from Stanford University and SLAC National Accelerator Laboratory have developed a synthetic catalyst that produces chemicals much the way enzymes do in living organisms. In a study published in the Aug. 5 issue of Nature Catalysis, the researchers say their discovery could lead to industrial catalysts capable of producing methanol using less energy and at a lower cost. Methanol has a variety of applications, and there is a growing demand for its use as a fuel with lower emissions than conventional gasoline.

"We took our inspiration from nature," said senior author Matteo Cargnello, an assistant professor of chemical engineering at Stanford. "We wanted to mimic the function of natural enzymes in the laboratory using artificial catalysts to make useful compounds."

For the experiment, the researchers designed a catalyst made of nanocrystals of palladium, a precious metal, embedded in layers of porous polymers tailored with special catalytic properties. Most protein enzymes found in nature also have trace metals, like zinc and iron, embedded in their core.

The researchers were able to observe trace palladium in their catalysts with electron microscopic imagery by co-author Andrew Herzing of the National Institute of Standards and Technology.

"We focused on a model chemical reaction: converting toxic carbon monoxide and oxygen into carbon dioxide (CO2)," said PhD student Andrew Riscoe, lead author of the study. "Our goal was to see if the artificial catalyst would function like an enzyme by speeding up the reaction and controlling the way CO2 is produced."

To find out, Riscoe placed the catalyst in a reactor tube with a continuous flow of carbon monoxide and oxygen gas. When the tube was heated to about 150 degrees Celsius (302 degrees Fahrenheit), the catalyst began generating the desired product, carbon dioxide.

High-energy X-rays from the Stanford Synchrotron Radiation Lightsource (SSRL) at SLAC revealed that the catalyst had traits similar to those seen in enzymes: The palladium nanocrystals inside the catalyst were continuously reacting with oxygen and carbon monoxide to produce carbon dioxide. And some of the newly formed carbon dioxide molecules were getting trapped in the outer polymer layers as they escaped from the nanocrystals.

"The X-rays showed that once the polymer layers were filled with CO2, the reaction stopped," said Cargnello, an affiliate with the Stanford Natural Gas Initiative (NGI). "This is important, because it's the same strategy used by enzymes. When an enzyme produces too much of a product, it stops working, because the product is no longer needed. We showed that we can also regulate the production of CO2 by controlling the chemical composition of the polymer layers. This approach could impact many areas of catalysis."

With the success of the carbon dioxide experiment, Cargnello and his colleagues have turned their attention to converting methane, the main ingredient in natural gas, into methanol, a chemical widely used in textiles, plastics and paints. Methanol has also been touted as a cheaper, cleaner alternative to gasoline fuel.

"The ability to convert methane to methanol at low temperatures is considered a holy grail of catalysis," Cargnello said. "Our long-term goal is to build a catalyst that behaves like methane monooxoygenase, a natural enzyme that certain microbes use to metabolize methane."

Most methanol today is produced in a two-step process that involves heating natural gas to temperatures of about 1,000 C (1,800 F). But this energy-intensive process emits a large amount of carbon dioxide, a potent greenhouse gas that contributes to global climate change.

"An artificial catalyst that directly converts methane to methanol would require much lower temperatures and emit far less CO2," Riscoe explained. "Ideally, we could also control the products of the reaction by designing polymer layers that trap the methanol before it burns."

"In this work, we demonstrated that we can prepare hybrid materials made of polymers and metallic nanocrystals that have certain traits typical of enzymatic activity," said Cargnello, who is also affiliated with Stanford's SUNCAT Center for Interface Science and Catalysis. "The exciting part is that we can apply these materials to lots of systems, helping us better understand the details of the catalytic process and taking us one step closer to artificial enzymes."