HOUSTON , TX — June 4, 2020 — Eggs that would otherwise be wasted can be used as the base of an inexpensive coating to protect fruits and vegetables, according to Rice University researchers.

The Brown School of Engineering lab of materials scientist Pulickel Ajayan and colleagues have developed a micron-thick coating that solves problems both for the produce and its consumers, as well as for the environment.

When the coating was applied to produce by spraying or dipping, it showed a remarkable ability to resist rotting for an extended period comparable to standard coatings like wax but without some of the inherent problems. 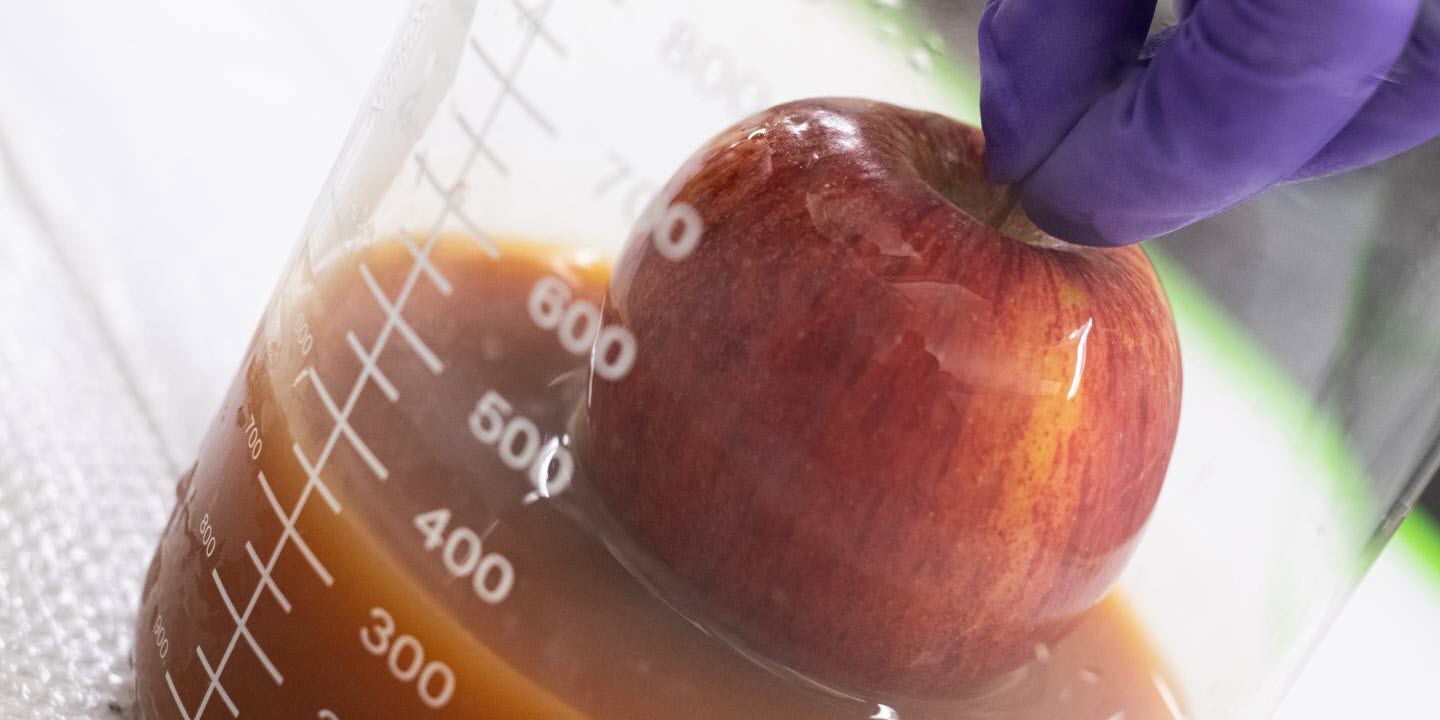 A coating developed at Rice University made primarily with protein from eggs that would otherwise be wasted can be used to extend the freshness of produce.
Jeff Fitlow, Rice University

The coating relies on eggs that never reach the market. As the United States produces more than 7 billion eggs a year and manufacturers reject three percent of them, the researchers estimate more than 200 million eggs end up in landfills.

Even before the impact of the new coronavirus, the world wasted a third of the food produced around the globe, the researchers wrote.

"Reducing food shortages in ways that don't involve genetic modification, inedible coatings or chemical additives is important for sustainable living," Ajayan said. "The work is a remarkable combination of interdisciplinary efforts involving materials engineers, chemists, and biotechnologists from multiple universities across the US."

Along with being edible, the multifunctional coating retards dehydration, provides antimicrobial protection and is largely impermeable both to water vapor to retard dehydration and to gas to prevent premature ripening. The coating is all-natural and washes off with water.

"If anyone is sensitive to the coating or has an egg allergy, they can easily eliminate it," Jung said. 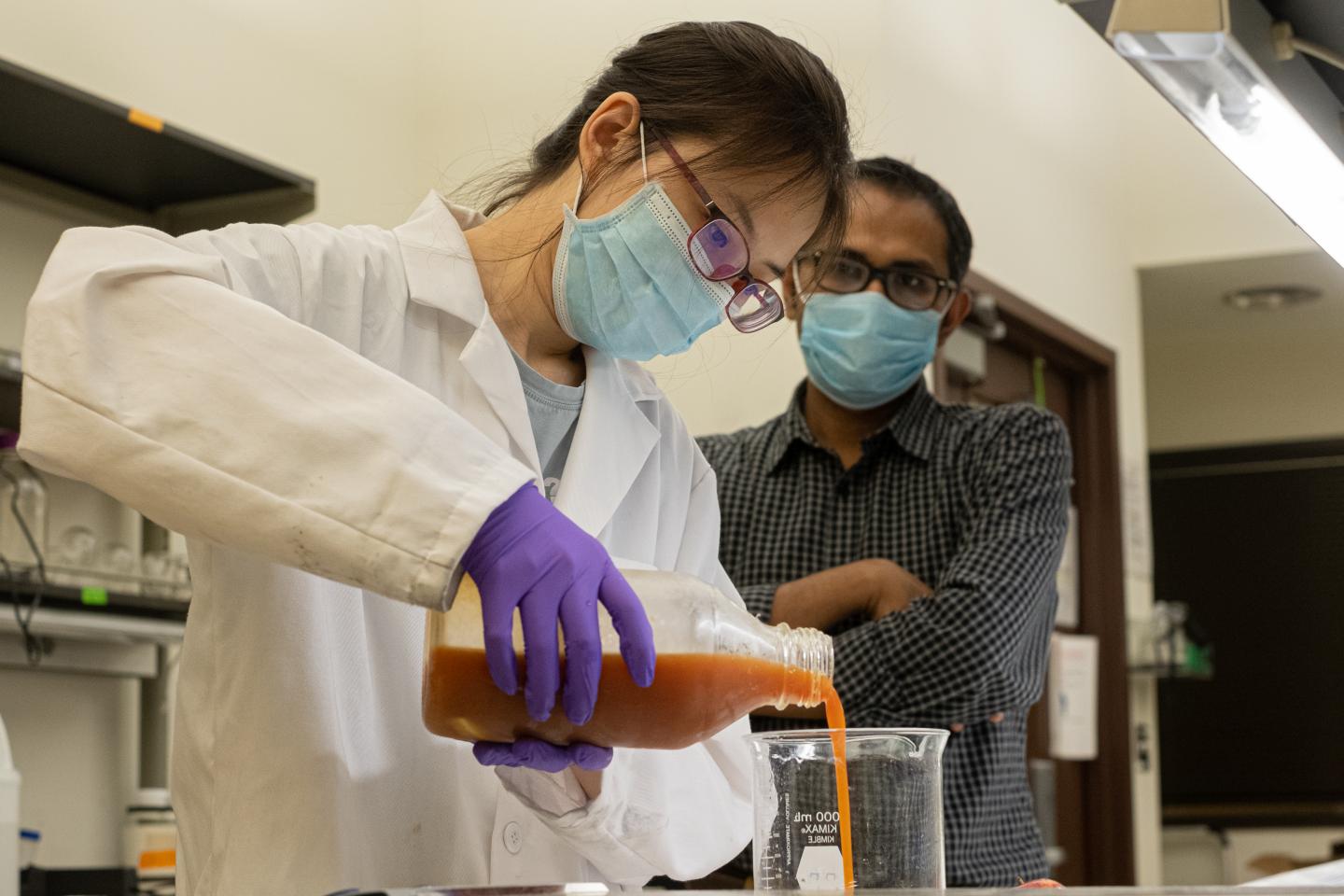 Rice University undergraduate student Yufei (Nancy) Cui prepares a solution based on protein from wasted eggs. The solution can be used as a coating that extends the freshness of fruit and vegetables. With her is Rice research scientist and mentor Muhammad Rahman.
Jeff Fitlow, Rice University

Egg whites (aka albumen) and yolks account for nearly 70 percent of the coating. Most of the rest consists of nanoscale cellulose extracted from wood, which serves as a barrier to water and keeps produce from shriveling, a small amount of curcumin for its antimicrobial powers and a splash of glycerol to add elasticity.

Lab tests on dip-coated strawberries, avocadoes, bananas, and other fruit showed they maintained their freshness far longer than uncoated produce. Compression tests showed coated fruit were significantly stiffer and more firm than uncoated and demonstrated the coating's ability to keep water in the produce, slowing the ripening process.

An analysis of freestanding films of the coating showed it to be extremely flexible and able to resist cracking, allowing better protection of the produce. Tests of the film's tensile properties showed it to be just as tough as other products, including synthetic films used in produce packaging. Further tests proved the coating to be nontoxic, and solubility tests showed a thicker-than-usual film is washable. 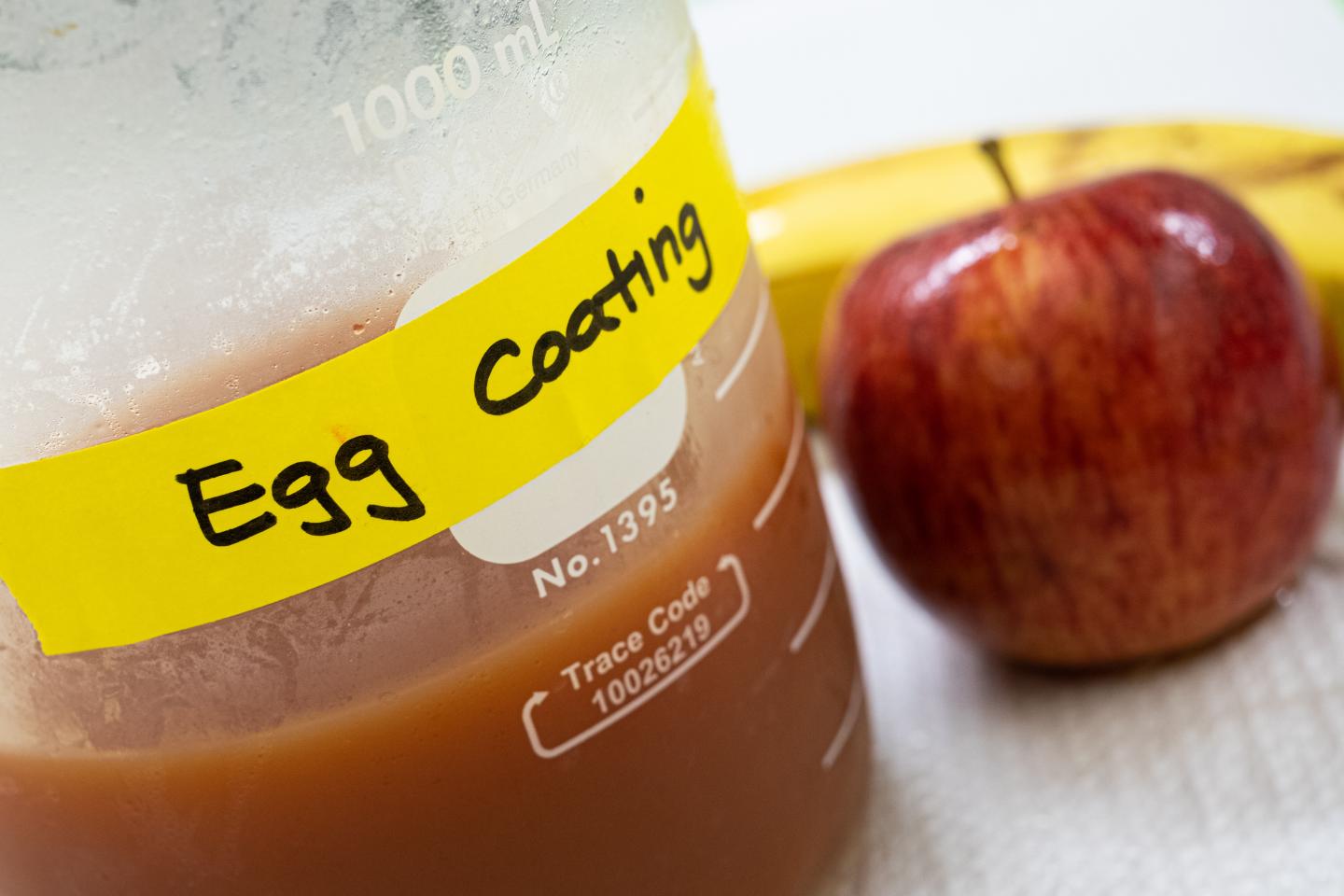 Eggs that would otherwise be wasted can be used as the base of an inexpensive coating to protect fruits and vegetables, according to Rice University researchers.
Jeff Fitlow, Rice University

Rinsing in water for a couple of minutes can completely disintegrate it, Ajayan said.

The researchers continue to refine the coating's composition and are considering other source materials. "We chose egg proteins because there are lots of eggs wasted, but it doesn't mean we can't use others," said co-corresponding author Muhammad Rahman, a research scientist in Ajayan's Rice lab, who mentored and led the team.

Jung noted the team is testing proteins that could be extracted from plants rather than animal produce to make coatings.

- This press release was originally published on the Rice University website