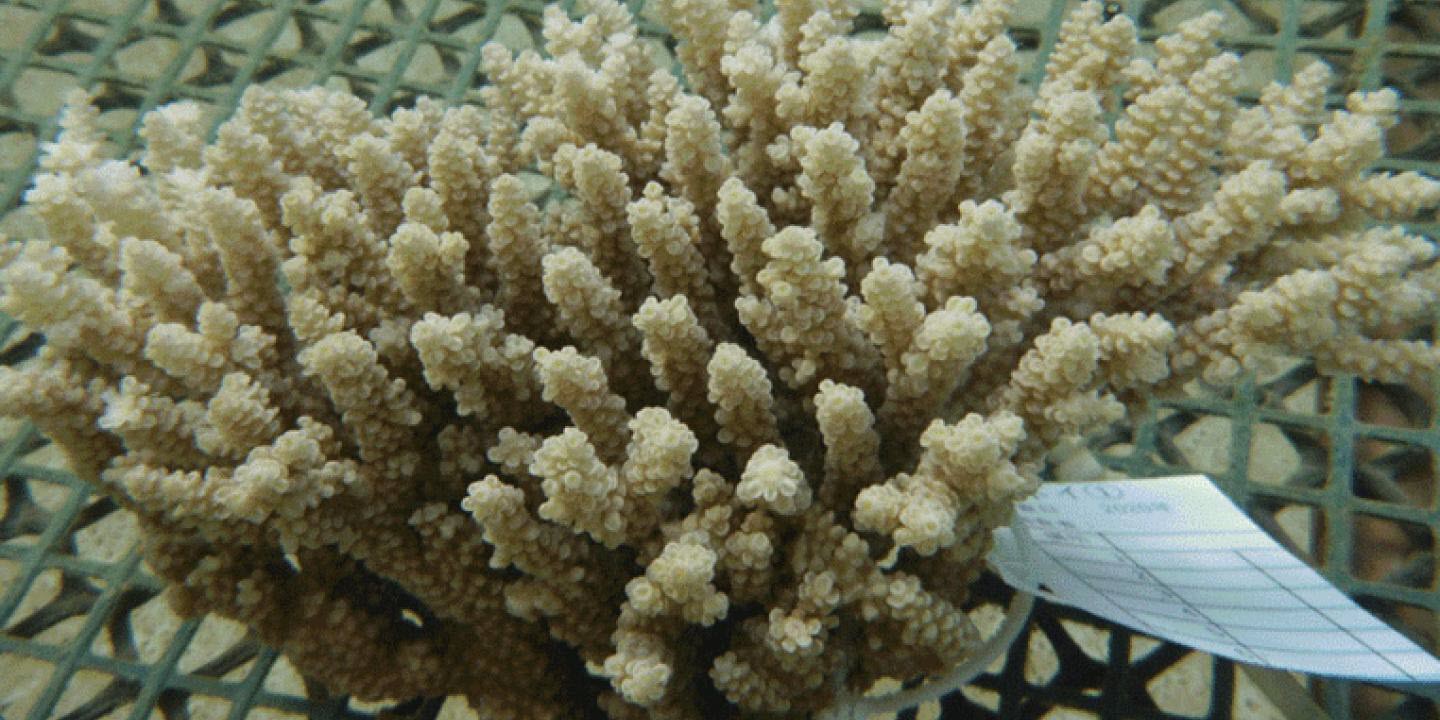 A colony of Acropora tenuis grown in a natural sea environment and transferred to an aquarium to induce spawning.
This image was reproduced from "Establishing sustainable cell lines of a coral, Acropora tenuis" by Kawamura et al, Marine Biotechnology

Researchers in Japan have established sustainable cell lines in a coral, according to a study published Apr. 26 in Marine Biotechnology.

Seven out of eight cell cultures, seeded from the stony coral, Acropora tenuis, have continuously proliferated for over 10 months, the scientists reported.

"Establishing stable cells lines for marine organisms, especially coral, has proven very difficult in the past," said professor Noriyuki Satoh, senior author of the study and head of the Marine Genomics Unit at the Okinawa Institute of Science and Technology Graduate University (OIST). "This success could prove to be a pivotal moment for gaining a deeper understanding of the biology of these vitally important animals."

Acropora tenuis belongs to the Acroporidae family, the most common type of coral found within tropical and subtropical reefs. These stony corals are fast growers and therefore play a crucial role in the structural formation of coral reefs.

However, Acroporidae corals are particularly susceptible to changes in ocean conditions, often undergoing bleaching events when temperatures soar or when oceans acidify. Establishing knowledge about the basic biology of these corals through cell lines could one day help protect them against climate change, explained Satoh.

In the study, Satoh worked closely with Kaz Kawamura from Kochi University—an expert in developing and maintaining cell cultures of marine organisms.

Since adult coral host a wide variety of microscopic marine organisms, the group chose to try creating the cell lines from coral larvae to reduce the chances of cross-contamination. Another benefit of using larval cells was that they divide more easily than adult cells, potentially making them easier to culture.

The microscope image shows three of the cell lines established in the study, ranging in color and form.
THIS IMAGE WAS REPRODUCED FROM "ESTABLISHING SUSTAINABLE CELL LINES OF A CORAL, ACROPORA TENUIS" BY KAWAMURA ET AL, MARINE BIOTECHNOLOGY

The researchers used coral specimens in the lab to isolate both eggs and sperm and fertilize the eggs. Once the coral larvae developed, they separated the larvae into individual cells and grew them in petri dishes.

Initially, the culture attempts ended in failure. "Small bubble bodies appeared and then occupied most of the petri dish," said Kawamura. "We later found that these were the fragments of dying stony coral cells."

In the second year, the group discovered that by adding a protease called plasmin to the cell culture medium, right at the beginning of the culture, they could stop the stony coral cells from dying and keep them growing.

Two to three weeks later, the larval cells developed into eight different cell types, which varied in color, form and gene activity. Seven out of the eight continued to divide indefinitely to form new coral cells.

One of the most exciting advancements of this study was that some of the cell lines were similar in form and gene activity to endodermal cells. The endoderm is the inner layer of cells formed about a day after the coral eggs are fertilized.

Importantly, it is the cells in the endoderm that incorporate the symbiotic algae, which photosynthesize and provide nutrients to sustain the coral. 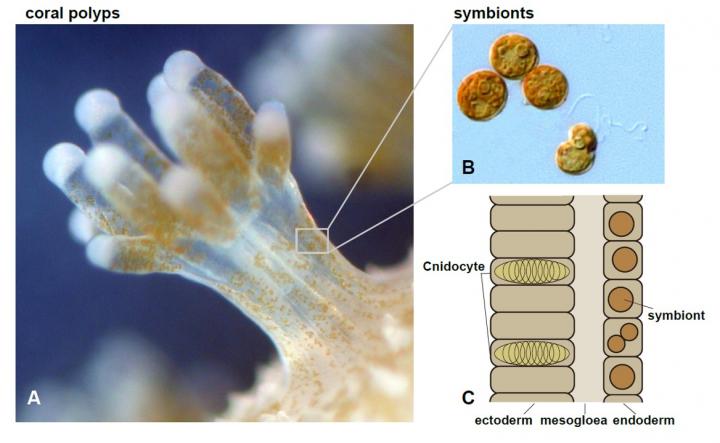 Corals are the one of the simplest animals, with only two layers of cells (called germ layers) forming in early embryonic development—an inner layer, the endoderm, and an outer layer, the ectoderm. Each germ cell layer ultimately develops into different types of cells, including digestive cells, muscle-like cells, nerve-like cells and stinging cells (cnidocytes) but how each cell type forms during development still requires investigation.
OIST

"At this point in time, the most urgent need in coral biology is to understand the interaction between the coral animal and its photosynthetic symbiont at the cellular level, and how this relationship collapses under stress, leading to coral bleaching and death," said David Miller, a leading coral biologist from James Cook University, Australia, who was not involved in the study.

He continued: "Subject to confirmation that these cells in culture represent coral endoderm, detailed molecular analyses of the coral/photosymbiont interaction would then be possible—and from this, real advances in understanding and perhaps preventing coral bleaching could be expected to flow."

For Satoh, his interest is in how the photosymbiotic algae cells, which are almost as big as the larval cells, initially enter the coral.

"The algae are incorporated into the coral cells around a week after the larvae first develop," said Satoh. "But no one has yet observed this endosymbiotic event on a single-cell level before."

The implications for future research using these cell lines are far-reaching, ranging from research on how single coral cells respond to pollution or higher temperatures, to studying how corals produce the calcium carbonate that builds their skeleton.

Research could also provide further insight into how corals develop, which could improve our ability to farm coral.

In future research, the team hopes to establish cells lines that are clonal, meaning every cell in the culture is genetically identical.

"This will give us a much clearer idea of exactly which coral cell types we are growing, for example gut-like cells or nerve-like cells, by looking at which genes are switched on and off in the cells," said Satoh.