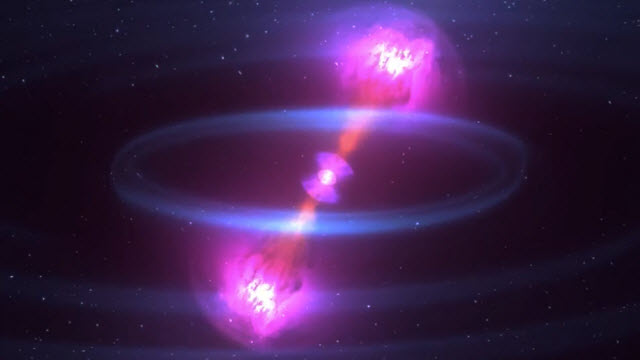 When Neutron Stars Collide: Click here for an animation showing a simulated merger of a pair of neutron stars.Image Credit: Caltech

On Aug. 17, scientists around the globe were treated to near-simultaneous observations by separate instruments: One set of Earth-based detectors measured the signature of a cataclysmic event sending ripples through the fabric of space-time, and a space-based detector measured the gamma-ray signature of a high-energy outburst emanating from the same region of the sky.

These parallel detections led astronomers and astrophysicists on an all-out hunt for more detailed measurements explaining this confluence of signals, which would ultimately be confirmed as the first measurement of the merger of two neutron stars and its explosive aftermath.

Just a week earlier, Daniel Kasen, a scientist in the Nuclear Science Division at the Department of Energy’s Lawrence Berkeley National Laboratory (Berkeley Lab) and an associate professor of physics and astronomy at UC Berkeley, was attending a science conference in Seattle.

A hypothetical question was posed to attendees as to when would astronomers detect an astrophysical source that produced both a strong disruption in the space-time continuum—in the form of gravitational waves—and see an associated burst of light. 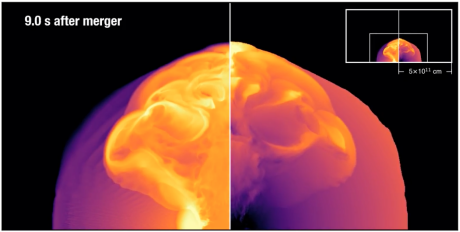 This image, from a simulation showing the formation of a cocoon-like release in the merger of two neutron stars, illustrates energy density nine seconds after the merger, with higher density shown in yellower shades.Image credit: CaltechThe likely target would be the violent merger of a neutron star, which is the ultradense remnant of an exploded star, with another neutron star or a black hole. Such events have been theorized to seed the universe with heavy elements like gold, platinum, and radioactive elements like uranium.

Most scientists in the room expected that, based on the planned sensitivity of future instruments, and the presumed rarity of neutron star mergers, such a historic discovery might—with some luck—be more than a decade away.

So Kasen, who had been working for years on models and simulations to help understand the likely signals from merging neutron stars, was stunned when data on a neutron star merger and its aftermath began to pour in just a week later.

“It seemed too good to be true,” said Kasen. “Not only had they detected gravitational waves, but from a neutron star merger that was so close, it was practically in our backyard. Almost everybody on Earth with a telescope started pointing at the same part of the sky.”

LIGO and VIRGO—a network of Earth-based gravitational wave detectors capable of observing some of the universe’s most violent events by detecting ever-so-slight changes in laser-measured distances caused by passing gravitational waves—had picked up an event.

A couple of seconds later, a brief burst of gamma rays were detected by an instrument aboard the Fermi Gamma-ray Space Telescope. Less than 12 hours after that, astronomers spotted the first glimpse of visible light from the event.

When Kasen saw the email alerts rolling in about the various observations, he couldn’t help but feel a sense of unease. “For years we had been studying what colliding neutron stars would look like, with nothing to go on but our theoretical imagination and computer modeling,” he said. “Now, real data was flooding in, and it was going to test everything we had predicted.”

Over the following days and weeks, an influx of observations provided data confirming that the brilliant burst behaved remarkably like the theorized merger of two neutron stars.

Computer simulations had suggested that, during such a merger, a small fraction of neutron star matter would be flung into surrounding space. Models predicted that this cloud of exotic debris would assemble into heavy elements and give off a radioactive glow over 10 million times brighter than the sun. The phenomenon is called a kilonova or macronova. 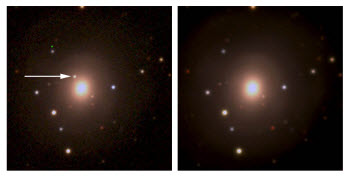 The arrow in the left image points to light associated with matter expelled from a neutron star merger, as recorded by the Dark Energy Camera.Image Credit: DECam/DES CollaborationJennifer Barnes, an Einstein postdoctoral fellow at Columbia University, who as a UC Berkeley graduate student worked with Kasen to compute some of the first detailed model predictions of kilonovae, said, “We expected from theory and simulations that kilonovae would be tinged red if heavy elements were produced, and would shine blue if they weren’t.

She added, “Understanding this relationship allowed us to more confidently interpret the emission from this event and diagnose the presence of heavy elements in the merger debris.”

Kasen, Barnes, and two other Berkeley Lab scientists were among the co-authors of several papers published today in the journals Nature, Science, and the Astrophysical Journal. The publications detailed the discovery, follow-up observations, and theoretical interpretation of this event.

Simulations related to the event were carried out at the Lab’s National Energy Research Scientific Computing Center (NERSC).

Peter Nugent, a senior staff scientist in the Computational Research Division at Berkeley Lab and an adjunct professor of astronomy at UC Berkeley, also closely followed the alerts related to the Aug. 17 observations.

At the time, he was assisting with the final preparations for the startup of the Zwicky Transient Facility (ZTF) at the Palomar Observatory in Southern California. Berkeley Lab is a member of the collaboration for ZTF, which is designed to discover supernovae and also to search for rare and exotic events such as those that occur during the aftermath of neutron star mergers.

“This event happened too early by three months,” Nugent said, as the soon-to-launch ZTF is designed to quickly follow up on LIGO/VIRGO gravitational wave measurements to look for their visible counterparts in the sky.

Nugent said that, at first, he thought that the multiple observations of the object (known as an optical transient) associated with the neutron star merger and gamma-ray burst was just a common supernova. But the object was evolving too quickly and had an incredibly blue light signature that pointed to a different type of event than the supernovae normally associated with the type of galaxy hosting this event.

Also, Nugent said, “We didn’t expect an event this close. It’s almost akin to having a supernova blow up in Andromeda,” which is about 2.5 million light years away from our Milky Way galaxy. “We hope this means there are going to be more of these events. We now know the rate is not zero.”

Nugent contributed to an analysis in one of the papers in the journal Science that concludes there may be “many more events” like the observed merger, and that neutron star mergers are likely “the main production sites” for heavy elements in the Milky Way. The observation could also provide valuable clues about how scientists might look for other neutron star mergers in optical surveys without a LIGO/VIRGO detection.

“How the heaviest elements came to be has been one of the longest standing questions of our cosmic origins,” Kasen said. “Now we have for the first time directly witnessed a cloud of freshly made precious metals right at their production site.”

The debris cloud from the merger mushroomed from about the size of a city shortly after the merger to about the size of a solar system after only one day, Kasen said. It is also likely that only a few percent of the matter in the merging neutron stars escaped the central site of the merger; the rest likely collapsed to form a black hole.

It is expected that the escaping debris will be very long-lived, diffusing across the galaxy over a billion years and enriching stars and planets with the heavy elements like those we find on Earth today.

“For me, it is the astronomical event of a lifetime,” Kasen said “It’s also an incredible moment for the field of scientific computing. Simulations succeeded in modeling what would happen in an incredibly complex phenomenon like a neutron star merger. Without the models, we all probably all would have been mystified by exactly what we were seeing in the sky.” 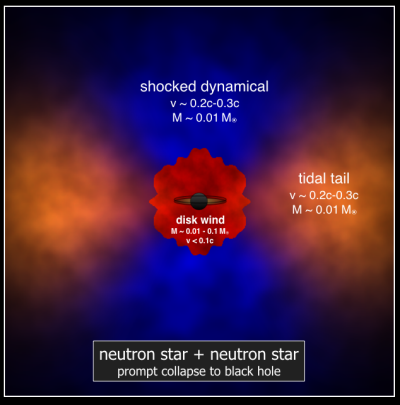 Illustration showing the modeled effects of a neutron star merger that results in the formation of a black hole.Image Credit: Daniel Kasen/Berkeley Lab, UC BerkeleyFuture advances in computing, and new insights from the Facility for Rare Isotope Beams (FRIB) at Michigan State University on exotic reactions that produce heavy nuclei, should provide even more insight as to how the heavy elements came to be, and the extreme physics of matter and gravity that occurs in mergers.

Kasen is also the lead investigator on a DOE Exascale Computing Project that is developing high-performance astrophysical simulation codes that will run on the next generation of U.S. supercomputers. He is also a member of a DOE-supported SciDAC (Scientific Discovery through Advanced Computing) collaboration that is using computing to simulate supernovae, neutron star mergers, and related high-energy events.

“Before these observations, the signals from neutron star mergers were mainly theoretical speculation,” Kasen said. “Now, it has suddenly become a major new field of astrophysics.”

Berkeley Lab’s contributions to the simulations and observations were supported by the U.S. Department of Energy’s Office of Science.