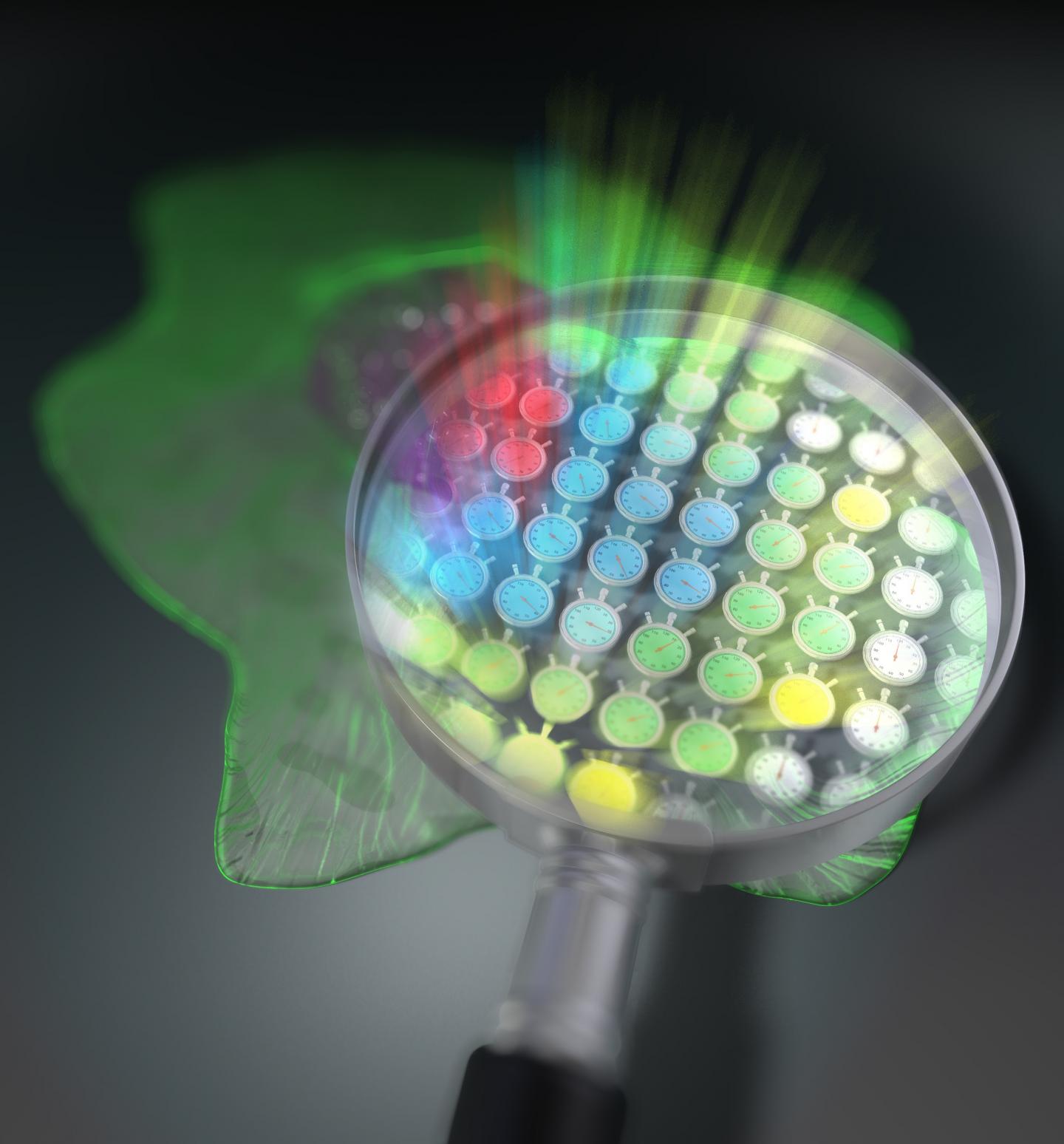 Fluorescence microscopy is widely used in biochemistry and life sciences because it allows scientists to directly observe cells and certain compounds in and around them. Fluorescent molecules absorb light within a specific wavelength range and then re-emit it at the longer wavelength range. However, the major limitation of conventional fluorescence microscopy techniques is that the results are very difficult to evaluate quantitatively; fluorescence intensity is significantly affected by both experimental conditions and the concentration of the fluorescent substance. Now, a new study by scientists from Japan is set to revolutionize the field of fluorescence lifetime microscopy.

A way around the conventional problem is to focus on fluorescence lifetime instead of intensity. When a fluorescent substance is irradiated with a short burst of light, the resulting fluorescence does not disappear immediately but actually "decays" over time in a way that is specific to that substance. The "fluorescence lifetime microscopy" technique leverages this phenomenon—which is independent of experimental conditions—to accurately quantify fluorescent molecules and changes in their environment. However, fluorescence decay is extremely fast, and ordinary cameras cannot capture it. While a single-point photodetector can be used instead, it has to be scanned throughout the sample's area to be able to reconstruct a complete 2D picture from each measured point. This process involves movement of mechanical pieces, which greatly limits the speed of image capture.

Fortunately, in this recent study published in Science Advances, the aforementioned team of scientists developed a novel approach to acquire fluorescence lifetime images without necessitating mechanical scanning. Professor Takeshi Yasui, from the Institute of Post-LED Photonics (pLED), Tokushima University, Japan, who led the study, explains, "Our method can be interpreted as simultaneously mapping 44,400 'light stopwatches' over a 2D space to measure fluorescence lifetimes—all in a single shot and without scanning." So, how was this achieved? 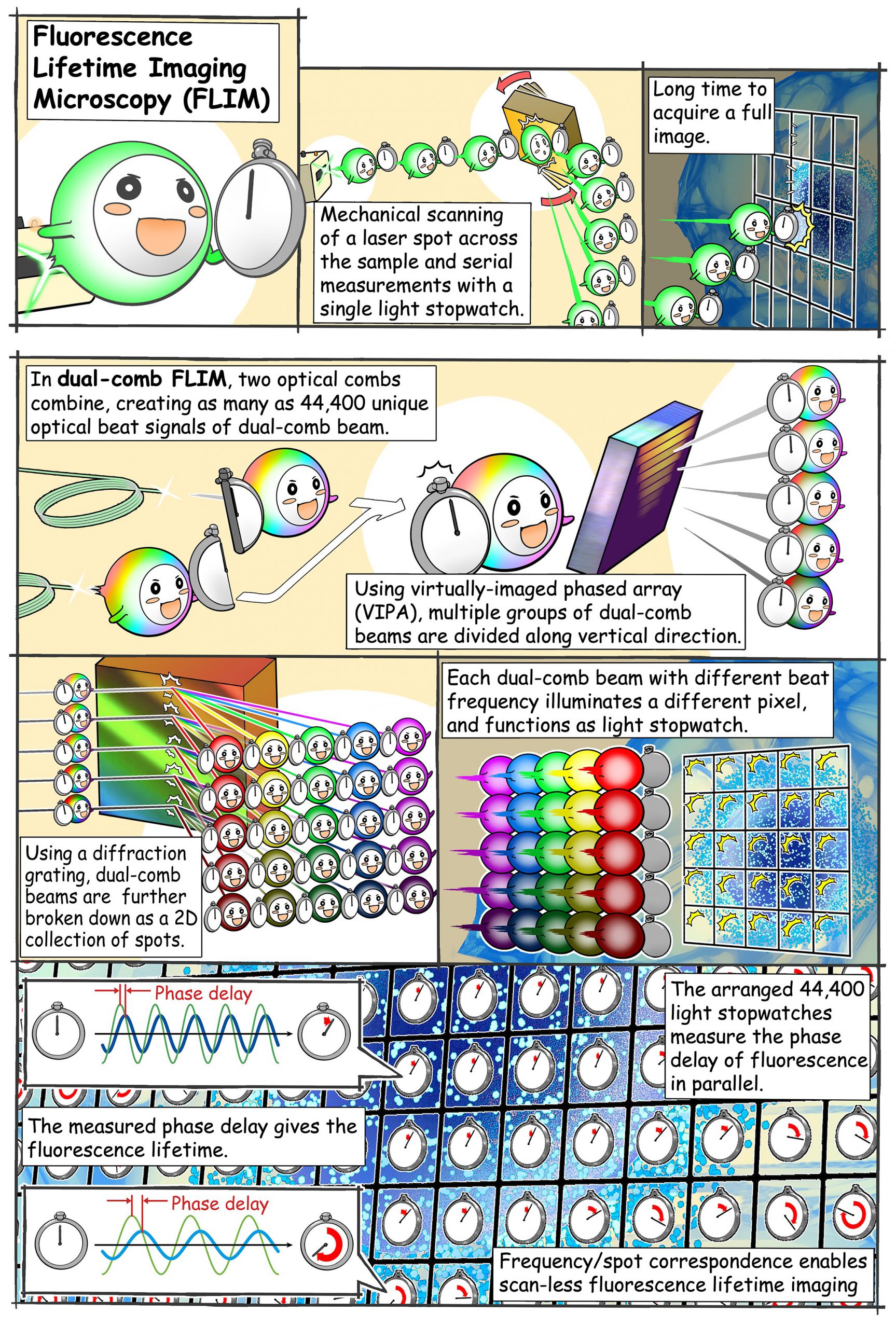 This new fluorescence microscopy technique will measure both fluorescence intensity and lifetime and it will not require mechanical scanning of a focal point; instead, it will produce images from all points in the sample simultaneously, enabling a more quantitative study of dynamic biological and chemical processes.
Suana Science YMY

Because of its fluorescence properties, the sample re-emits part of the captured radiation while still preserving the aforementioned frequency-position correspondence. The fluorescence emitted from the sample is then simply focused using a lens onto a high-speed single-point photodetector. Finally, the measured signal is mathematically transformed into the frequency domain, and the fluorescence lifetime at each "pixel" is easily calculated from the relative phase delay that exists between the excitation signal at that modulation frequency versus the one measured.

Thanks to its superior speed and high spatial resolution, the microscopy method developed in this study will make it easier to exploit the advantages of fluorescence lifetime measurements. "Because our technique does not require scanning, a simultaneous measurement over the entire sample is guaranteed in each shot," remarks Yasui, "This will be helpful in life sciences where dynamic observations of living cells are needed." In addition to providing deeper insight into biological processes, this new approach could be used for simultaneous imaging of multiple samples for antigen testing, which is already being used for the diagnosis of COVID-19.

Perhaps most importantly, this study showcases how optical frequency combs, which were only being used as "frequency rulers," can find a place in microscopy techniques to push the envelope in life sciences. It holds promise for the development of novel therapeutic options to treat intractable diseases and enhance life expectancy, thereby benefitting the whole of humanity.

- This press release was originally published on the Tokushima University Institute of Post-LED Photonics website. It has been edited for style