Researchers from Moscow Institute of Physics and Technology (MIPT) have developed a prototype detector of solar particles. The device is capable of picking up protons at kinetic energies between 10 and 100 megaelectronvolts, and electrons at 1-10 MeV. This covers most of the high-energy particle flux coming from the sun. The new detector can improve radiation protection for astronauts and spaceships, as well as advancing our understanding of solar flares. The research findings are reported in the Journal of Instrumentation.

As energy gets converted from one form to another in the active regions of the solar atmosphere, streams of particles—or cosmic rays—are born with energies roughly between 0.01-1,000 MeV. Most of these particles are electrons and protons, but nuclei from helium to iron are also observed, albeit in far smaller numbers.

The current consensus is that the particle flux has two principal components. First, there are the narrow streams of electrons in brief flares lasting from tens of minutes to several hours. And then there are the flares with broad shockwaves, which last up to several days and mostly contain protons, with some occasional heavier nuclei.

Despite the vast arrays of data supplied by solar orbiters, some fundamental questions remain unresolved. Scientists do not yet understand the specific mechanisms behind particle acceleration in the shorter- and longer-duration solar flares. It is also unclear what the role of magnetic reconnection is for particles as they accelerate and leave the solar corona, or how and where the initial particle populations originate before accelerating on impact waves. To answer these questions, researchers require particle detectors of a novel type, which would also underlie new spaceship security protocols that would recognize the initial wave of electrons as an early warning of the impending proton radiation hazard. 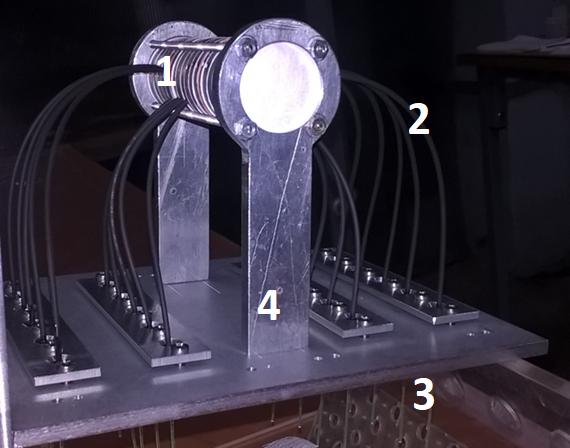 Insert Image Here (remove this text once you've added an image)
Device prototype: (1) the body of the detector consisting of scintillation disks, (2) fiber optics in a protective coating, (3) control boards for managing offset voltage and data acquisition—developed at the Institute for Nuclear Research of the Russian Academy of Sciences, (4) prototype frame and stand for ground-based observations.
Egor Stadnichuk et al./Journal of Instrumentation

A recent study by a team of physicists from MIPT and elsewhere reports the creation of a prototype detector of high-energy particles. The device consists of multiple polystyrene disks, connected to photodetectors. As a particle passes through polystyrene, it loses some of its kinetic energy and emits light, which is registered by a silicon photodetector as a signal for subsequent computer analysis.

The project's principal investigator Alexander Nozik from the Nuclear Physics Methods Laboratory at MIPT said: "The concept of plastic scintillation detectors is not new, and such devices are ubiquitous in Earth-based experiments. What enabled the notable results we achieved is using a segmented detector along with our own mathematical reconstruction methods."

Part of the paper in the Journal of Instrumentation deals with optimizing the detector segment geometry. The dilemma is that while larger disks mean more particles analyzed at any given time, this comes at the cost of instrument weight, making its delivery into orbit more expensive. Disk resolution also drops as the diameter increases. As for the thickness, thinner disks determine proton and electron energies with more precision, yet a large number of thin disks also necessitates more photodetectors and bulkier electronics.

The team relied on computer modeling to optimize the parameters of the device, eventually assembling a prototype that is small enough to be delivered into space. The cylinder-shaped device has a diameter of three centimeters and is eight centimeters tall. The detector consists of 20 separate polystyrene disks, enabling an acceptable accuracy of over five percent. The sensor has two modes of operation: It registers single particles in a flux that does not exceed 100,000 particles per second, switching to an integrated mode under more intense radiation. The second mode makes use of a special technique for analyzing particle distribution data, which was developed by the authors of the study and does not require much computing power.

"Our device has performed really well in lab tests," said study co-author Egor Stadnichuk of the MIPT Nuclear Physics Methods Laboratory. "The next step is developing new electronics that would be suitable for detector operation in space. We are also going to adapt the detector's configuration to the constraints imposed by the spaceship. That means making the device smaller and lighter, and incorporating lateral shielding. There are also plans to introduce a finer segmentation of the detector. This would enable precise measurements of electron spectra at about 1 MeV."