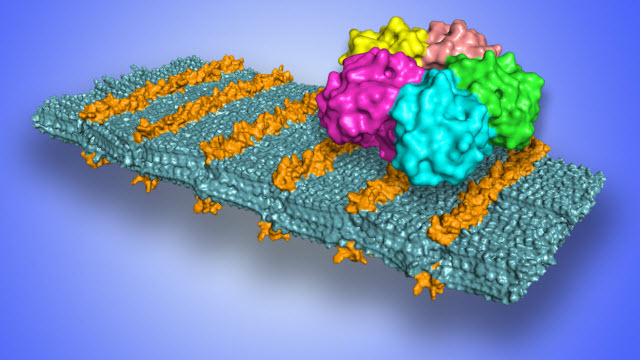 A molecular model of a peptoid nanosheet shows loop structures in sugars (orange) that bind to the Shiga toxin (shown as a five-color bound structure at upper right).Image Credit: Berkeley Lab

Researchers have developed a process for creating ultrathin, self-assembling sheets of synthetic materials that can function like designer flypaper in selectively binding with viruses, bacteria, and other pathogens.

In this way the new platform, developed by a team led by scientists at the U.S. Department of Energy’s Lawrence Berkeley National Laboratory (Berkeley Lab), could potentially be used to inactivate or detect pathogens.

The team, which also included researchers from New York University, created the synthesized nanosheets at Berkeley Lab’s Molecular Foundry, a nanoscale science center, out of self-assembling, bio-inspired polymers known as peptoids. The study was published earlier this month in the journal ACS Nano.

The sheets were designed to present simple sugars in a patterned way along their surfaces, and these sugars, in turn, were demonstrated to selectively bind with several proteins, including one associated with the Shiga toxin, which causes dysentery. Because the outside of our cells are flat and covered with sugars, these 2-D nanosheets can effectively mimic cell surfaces. 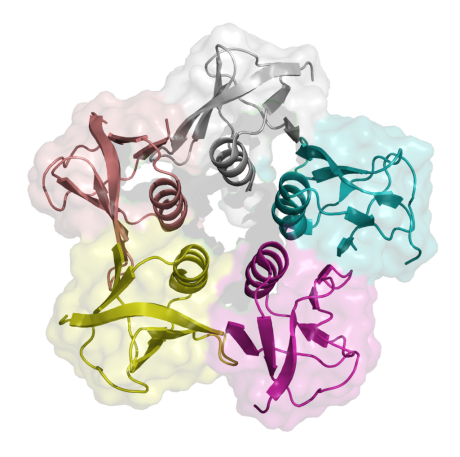 A 3-D ribbon model representing a protein subunit of the Shiga toxin. The bacteria-produced toxin causes dysentery in humans.Image Credit: Wikimedia Commons“It’s not just a ‘lock and key’—it’s like Velcro, with a bunch of little loops that converge on the target protein together,” said Ronald Zuckermann, a scientist at the Molecular Foundry who led the study. “Now we can mimic a nanoscale feature that is ubiquitous in biology.”

He noted that numerous pathogens, from the flu virus to cholera bacteria, bind to sugars on cell surfaces. So picking the right sugars to bind to the peptoid nanosheets, in the right distributions, can determine which pathogens will be drawn to them.

“The chemistry we’re doing is very modular,” Zuckermann added. “We can ‘click on’ different sugars, and present them on a well-defined, planar surface. We can control how far apart they are from each other. We can do this with pretty much any sugar.”

The peptoid platform is also more rugged and stable compared to natural biomolecules, he said, so it can potentially be deployed into the field for tests of bioagents by military personnel and emergency responders, for example.

And peptoids—an analog to peptides in biology that are chains of amino acids—are cheap and easy-to-make polymers.

“The chemical information that instructs the molecules to spontaneously assemble into the sugar-coated sheets is programmed into each molecule during its synthesis,” Zuckermann said.  “This work demonstrates our ability to readily engineer sophisticated biomimetic nanostructures by direct control of the polymer sequence.”

The sugar-coated nanosheets are made in a liquid solution. Zuckermann said if the nanosheets are used to protect someone from becoming exposed to a pathogen, he could envision the use of a nasal spray containing the pathogen-binding nanosheets. 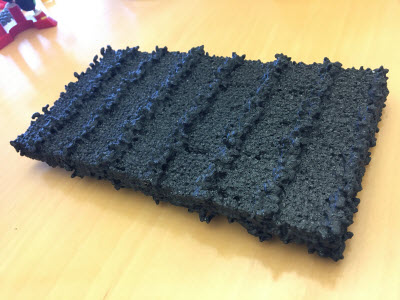 A 3-D-printed model of a peptoid nanosheet, showing patterned rows of sugars.Photo Credit: Berkeley LabThe nanosheets could also potentially be used in environmental cleanups to neutralize specific toxins and pathogens, and the sheets could potentially be scaled to target viruses like Ebola and bacteria like E. coli, and other pathogens.

In the latest study, the researchers confirmed that the bindings with the targeted proteins were successful by embedding a fluorescent dye in the sheets and attaching another fluorescent dye on the target proteins. A color change indicated that a protein was bound to the nanosheet.

The intensity of this color change can also guide researchers to improve them, and to discover new nanosheets that could target specific pathogens.

Scientists also conducted X-ray-based experiments at Berkeley Lab’s Advanced Light Source to analyze the nanoscale structure of the sheets, and confirm the presence of sugars on their surface. The Molecular Foundry and Advanced Light Source are DOE Office of Science User Facilities. This work was supported by the U.S. Defense Threat Reduction Agency, the U.S. Defense Advanced Research Projects Agency, and the National Research Foundation of Korea.