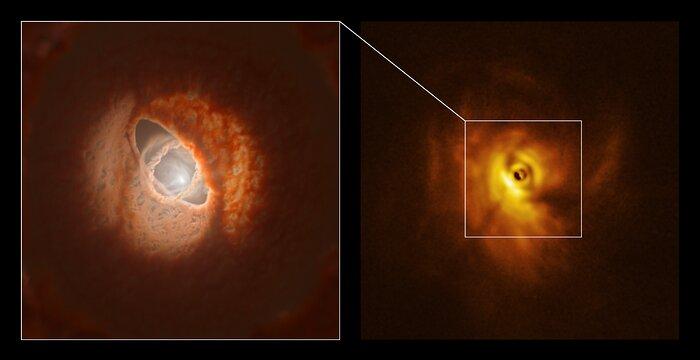 Pioneering new research has revealed the first direct evidence that groups of stars can tear apart their planet-forming disc, leaving it warped and with tilted rings.

An international team of experts, led by astronomers at the University of Exeter, has identified a stellar system where planet formation might take place in inclined dust and gas rings within a warped circumstellar disc around multiple stars.

A view from a potential planet around this system will give the observer a stunning view of a tilted, multiple stellar constellation—similar to Star Wars' Tatooine.

The research is the first output of a large program on young stellar systems that uses a pioneering infrared imager, called MIRC-X, that combines the light from all six telescopes of the CHARA telescope array. MIRC-X has been built by the Universities of Michigan and Exeter as part of a European Research Council-funded research project.

The instrument has been designed to give new insights into how star and planet formation is taking place within the rotating, circumstellar discs of dense dust and gas surrounding young stars.

Our Solar System is remarkably flat, with the planets all orbiting in the same plane. However, this is not always the case, especially for planet-forming discs around multiple stars, like the object of the new study: GW Orionis. This system, located just 1,200 light-years away in the constellation of Orion, has three stars and a deformed, broken-apart disc surrounding them.

"We're really excited that our new MIRC-X imager has provided the sharpest view yet of this intriguing system and revealed the gravitational dance of the three stars in the system, said Stefan Kraus, professor of astrophysics at the University of Exeter who led the research published Sept. 3 in Science. "Normally, planets form around a flat disc of swirling dust and gas—yet our images reveal an extreme case where the disc is not flat at all. 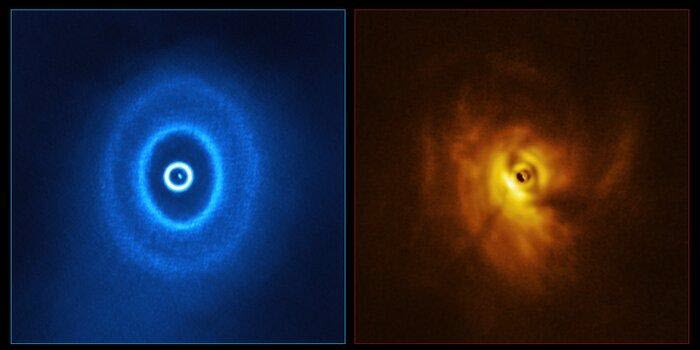 The comparison of the ALMA image (left) to the SPHERE image (right) at the same spatial scale.
ALMA (ESO/NAOJ/NRAO), ESO/Exeter/Kraus et al.

Instead it is warped and has a misaligned ring that has broken away from the disc. The misaligned ring is located in the inner part of the disc, close to the three stars. The effect is that the view of a potential planet within this ring looks remarkably like that of Tatooine, of Star Wars fame."

The team observed the system with the SPHERE instrument on ESO's VLT and with ALMA, and were able to image the inner ring and confirm its misalignment. The team observed shadows that this ring casts on the rest of the disc. This helped them figure out the 3D shape of the rings and overall disc geometry.

The new research reveals that this inner ring contains 30 Earth masses of dust, which could be enough to form planets.

"Any planets formed within the misaligned ring will orbit the star on highly oblique orbits and we predict that many planets on oblique, wide-separation orbits will be discovered in future planet imaging surveys, said Alexander Kreplin of the University of Exeter. "Since more than half of stars in the sky are born with one or more companions, this raises an exciting prospect: there could be an unknown population of exoplanets that orbit their stars on very inclined and distant orbits." 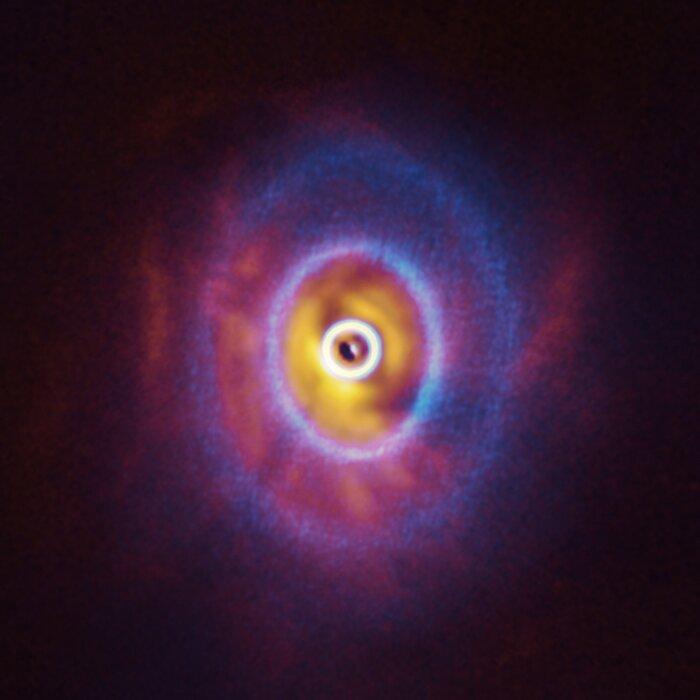 To reach these conclusions, the team observed GW Orionis for over 11 years and mapped the orbit of the stars with unprecedented precision. "We found that the three stars do not orbit in the same plane, but their orbits are misaligned with respect to each other and with respect to the disc," said Alison Young, a member of the team from the Universities of Exeter and Leicester.

The international team, with researchers from the UK, Belgium, Chile, France, and the US, then combined their exhaustive observations with computer simulations to understand what had happened to the system. For the first time, they were able to clearly link the observed misalignments to the theoretical 'disc-tearing effect,' which suggests that the conflicting gravitational pull of stars in different planes can warp and break their surrounding disc.

"We conducted simulations that show that the misalignment in the orbits of the three stars could cause the disc around them to break into distinct rings. This is what we see in the observations," said Matthew Bate, professor of theoretical astrophysics at Exeter, who carried out some of the computer simulations on the system. "The observed shape of the inner ring also matches predictions on how the disc would tear."