Researchers at the UCLA Eli and Edythe Broad Center of Regenerative Medicine and Stem Cell Research have discovered that a metabolic molecule called alpha-ketoglutarate helps pluripotent stem cells mature early in the process of becoming adult organs and tissues. The findings, published online July 28 in the journal Cell Metabolism, could be valuable for scientists working toward stem cell-based therapies for a wide range of diseases.

Pluripotent stem cells have the ability to create any specialized cell in the body, such as skin, bone, blood, or nervous system cells—a process called differentiation. Because of that ability, scientists are studying pluripotent stem cells to determine whether they can generate healthy tissues that could be used to treat people with conditions ranging from Alzheimer’s disease to blindness.

But to coax pluripotent stem cells into any desired cell type, scientists have to find the right conditions and mixture of molecules to add to the stem cells to promote differentiation. 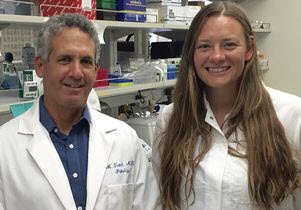 Dr. Mike Teitell and Tara TeSlaaPhoto credit: UCLA Broad Stem Cell Research Center“One of the biggest challenges in our field has been to use pluripotent stem cells to efficiently create specialized cells that can carry out specific functions in the body,” said Dr. Michael Teitell, the study’s senior author and a member of the Broad Stem Cell Research Center. “Our findings may help overcome that challenge and let scientists more easily create cells to treat disease.”

As they differentiate into specialized cells, pluripotent stem cells undergo a shift in their metabolism, and they begin converting sugars to energy more efficiently. Teitell and his colleagues wondered whether molecules involved in metabolism, or metabolites, might be more than just byproducts of this shift, and might actually help the stem cells differentiate.

“On its own, alpha-ketoglutarate probably wouldn’t promote differentiation, but when you add it to other factors that propel the creation of specialized cells, it seems to accelerate this process,” said Tara TeSlaa, first author of the new study and a graduate student in Teitell’s lab.

Since alpha-ketoglutarate is known to change how genes are regulated by removing methyl chemical groups from the DNA in a cell, Teitell and TeSlaa suspected that the molecule was helping cells turn off genes related to pluripotency and turn on genes related to more efficient differentiation.

To test that theory, they added another chemical, succinate, to the stem cell mixtures. Succinate blocks the same DNA demethylation chemical reaction that alpha-ketoglutarate promotes. Indeed, the addition of succinate caused the stem cells to differentiate slower and less efficiently, which provided further evidence that alpha-ketoglutarate works by acting on genes.

“Until very recently, metabolites have been overlooked as a way to help pluripotent stem cells differentiate,” said Teitell, professor of pathology and laboratory medicine at the UCLA David Geffen School of Medicine. “This work helps to change that view.”