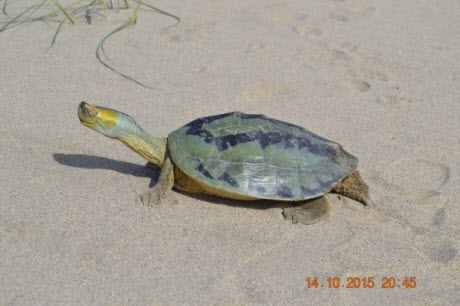 A combination of over-harvesting of eggs, incidental loss in fishing gear, and habitat loss due to gold mining had pushed the Burmese roofed turtle to the brink of extinction. But ongoing conservation work offers a glimmer of hope.

For the past 11 years, WCS scientists have monitored nesting sites, waiting for females to emerge from the Chindwin River to dig nests on sand bars. The scientists then collect the viable eggs to ensure the young turtles survive. 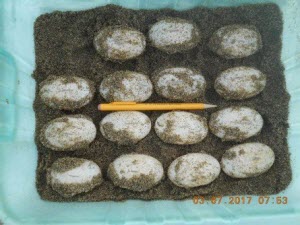 WCS/TSA scientists have uncovered 44 viable eggs of the critically endangered Burmese roofed turtle.Photo credit: Steven Platt/WCSThis year's eggs will be incubated in a protected sandbank on the river until they hatch in early June. The hatchlings will be maintained in large pools for the next four or five years. Once the turtles have grown large enough to be safe from predators, they will be released back into the river.

Young male turtles released into the wild in 2015 are believed to be responsible for inseminating the wild females. Scientists will conduct DNA tests on the hatchlings; if paternity can be traced to the released males, it would mark a major milestone in the conservation of the species, and Asian river turtles in general.

The captive population has grown to over 600 juveniles of all sizes, and conservationists plan to continue to release animals back into the wild.