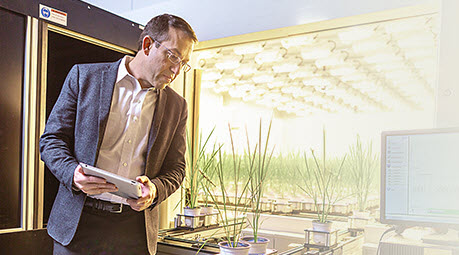 As the director of the Enterprise Institute for Renewable Fuels, a primary objective of Tom’s program is to expand the research portfolio to include the use of model plant systems to accelerate gene discovery and the development of second-generation lignocellulosic feedstocks. This work will complement ongoing algal research and provide new opportunities for forming academic and industrial partnerships.Photo courtesy of the Donald Danforth Plant Science CenterST. LOUIS, MO – Researchers at the Enterprise Rent-A-Car Institute for Renewable Fuels at the Donald Danforth Plant Science Center have discovered a gene that influences grain yield in grasses related to food crops. Four mutations were identified that could impact candidate crops for producing renewable and sustainable fuels.

In a paper published April 18, 2017 in Nature Plants,  a team led by Thomas Brutnell, PhD, director of the Enterprise Institute for Renewable Fuels at the Danforth Center, and researchers at the U.S. Department of Energy Joint Genome Institute (DOE JGI), a DOE Office of Science User Facility, conducted genetic screens to identify genes that may play a role in flower development on the panicle of green foxtail. Green foxtail is a wild relative of the common crop foxtail millet. These Setaria species are related to several candidate bioenergy grasses including switchgrass and Miscanthus and serve as grass model systems to study grasses that photosynthetically fix carbon from CO2 through a water-conserving (C4) pathway. The genomes of both green foxtail and foxtail millet have been sequenced and annotated through the DOE JGI’s Community Science Program.

“We have identified four recessive mutants that lead to reduced and uneven flower clusters,” said Pu Huang, PhD, the lead author of the paper. “By ultimately identifying the gene in green foxtail we identified a new determinant in the control of grain yield that could be crucial to improving food crops like maize.”

The grass Setaria has been proposed as a model for food and bioenergy crops for its short stature and rapid life cycle, compared to most bioenergy grasses. After constructing a mutant population resource for the grass, the Brutnell lab screened 2,700 M2 families, deep sequenced a mutant pool to identify the causative mutation and confirmed a homologous gene in maize played a similar role.

“Identifying this new player in panicle architecture may enable the design of plants with either enhanced or reduced panicle structures,” stated Brutnell. “For instance, maize breeding has selected for reduced male panicles, also known as tassels, to reduce shading in the field while still producing sufficient pollen.  However, grain yields in sorghum are directly related to the architecture of the panicle. By showing that this gene influences panicle architecture in Setaria and maize, we have expanded the tool box for breeders.”

At the Danforth Center, plants hold the key to discoveries and products that will enrich and restore both the environment and the lives of people around the globe. Brutnell’s lab research includes the search for the next generation of biofuels: alternative sources of energy that are affordable, sustainable, and ecologically sound. The research develops novel computational tools and model systems to identify genes that will improve yield in crops through enhanced photosynthesis.