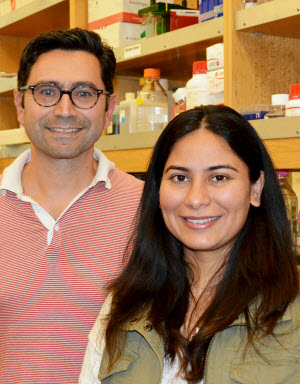 Knowledge about this protein, called Piezo 1, could be relevant for designing better pain medications and exploring future therapies for blood disorders, hypertension, and more.

“This latest work provides definitive proof that Piezos are, by themselves, ‘mechanosensitive,’” said senior author Ardem Patapoutian, a professor at TSRI and a Howard Hughes Medical Institute (HHMI) Investigator.

The study was published recently in the journal Cell Reports.

A ‘Sense’ of Mystery

Piezo 1 is an “ion channel,” or gateway through the cell membrane. When it senses mechanical force, it opens to allow ions to pass into the cell, starting a chain of events that send a signal to the brain—in other words, Piezo proteins control the sensation of touch.

“Out of all our senses, the sense of touch is the least understood, so significant efforts are being made to acquire a more complete understanding,” said Ruhma Syeda, a professional scientific collaborator at TSRI and first author of the new study. “We are only now unraveling the physiological roles of Piezo proteins.”

The new study addressed a lingering question about Piezo 1: Does it sense touch directly, or is it influenced by nearby proteins and other cellular components?

To study this, the researchers used a “reductionist” approach, which Syeda helped develop during her postdoctoral research. In this system, scientists extract a protein from its native environment in the cell and study it in a simpler membrane environment. This enables the scientists to see how the protein behaves on its own, without influence from other cellular players.

The researchers found that Piezo 1 does appear to directly sense force by detecting tension in the cell membrane. “It seems like it has a built-in sensor,” said Syeda.

The next step in this research is to better understand the molecular structure of Piezo 1—which could lead to a “map” of the protein and further insights into its function.

“I’m also very excited that this reductionist approach can be applied to other channels,” said Syeda. “We’ll be able to understand more channels and proteins and their physiological roles.”

In addition to Patapoutian and Syeda, authors of the study, “Piezo1 Channels Are Inherently Mechanosensitive,” were Maria N. Florendo and Jennifer M. Kefauver of HHMI and TSRI; Charles D. Cox of the Victor Chang Cardiac Research Institute; Jose S. Santos, previously at the University of California, San Diego, now at Dart NeuroScience; and Boris Martinac of the Victor Chang Cardiac Research Institute and the University of New South Wales.

The study was supported by the National Institutes of Health (grant R01NS083174), the National Health and Medical Research Council of Australia, and the Howard Hughes Medical Institute.