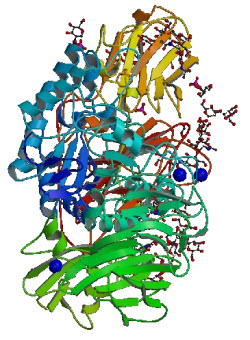 A ribbon diagram of beta-galactosidase, an enzyme widely used in the food industry. Image credit: www.pdb.org, via Wikimedia CommonsScientists from the University of Chicago have developed a novel approach to control the activity of enzymes through the use of synthetic, antibody-like proteins known as monobodies. A team led by Shohei Koide, PhD, professor of biochemistry and molecular biophysics, was able to change the specificity of an enzyme, widely used in the food industry, without altering the enzyme itself – establishing a new route for enzyme engineering and demonstrating the versatility of these synthetic proteins. The findings, detailed online in Nature Chemical Biology on Aug. 31, 2015, have widespread implications for a broad range of industrial, scientific and medical applications in which enzymes are used.

"This is the first time that synthetic accessory molecules have been engineered to change the specificity of an enzyme in order to achieve a desired end-product," said Koide, who also serves as a Scientific Director for the Chicago Biomedical Consortium. "In this paper, we demonstrated their efficacy on sugars, but one can envision applications of this concept with enzymes acting on other types of molecules such as lipids and peptides – there are literally hundreds of enzymes currently used in industry and millions that are potentially useful."

Enzymes are proteins that drive chemical reactions and enable complex biological processes. They act by recognizing and binding specific target molecules, termed substrates. Some enzymes combine substrates into a new molecule, such as those that synthesize strands of DNA from nucleic acids. Others break apart substrates into multiple products, such as ones that break down starch into sugars. Enzymes are used in a wide range of commercial applications, such as the preparation of foods, dietary supplements, therapeutics and chemical materials.

A major goal in biotechnology is to modify enzyme activity in order to carry out bespoke reactions. Current methods use genetic engineering to physically mutate enzymes. However, this is difficult to accomplish and requires detailed knowledge of enzyme structure and functional dynamics, which can be expensive, time-consuming and inefficient.

Koide and his colleagues approached this problem by leveraging their long-standing expertise in designing monobodies – compact proteins that function as synthetic antibodies. Like antibodies, monobodies recognize and bind to specific target proteins, serving as a marker or affecting function. Coupled with their small size (around 15 times smaller than an antibody) and simple structure, monobodies can be designed to bind with pinpoint precision to desired positions within a target molecule such as an enzyme.

The researchers focused on beta-galactosidase, an enzyme widely used in the food industry. One of its major uses is the production of short sugar chains that can serve as beneficial prebiotics. This enzyme builds chains of sugar molecules by adding individual sugar units to existing chains. However, its products are of varying length, leading low amounts of the desired short sugar chains.

The team set out to design a monobody that causes the enzyme to only act on small sugar chains. Starting with a pool of around 10 billion unique monobodies, they used directed evolution techniques to identify a group of monobodies that bound near the active site of beta-galactosidase. After multiple rounds of strenuous selection experiments, they were able to engineer one monobody that precisely altered beta-galactosidase activity in the manner they wanted, despite having only limited knowledge of how the enzyme carries out the reaction.

The monobody partially blocks the active site of the enzyme and prevents it from accepting large sugars as a substrate – thereby forcing it to produce only short sugar chains.

"We were able to design one monobody that prevents beta-galactosidase from using certain sugars as starting material and produce only small oligosaccharides, making it a much more valuable catalyst for use in industry," Koide said. "Our collaborators generated over 1,000 mutants of this enzyme in previous attempts to achieve the same goal and none of them did what this monobody accomplished. We are quite pleased with the outcome."

Monobodies are relatively economical to produce in large quantities, and are already in use as a platform for other applications by biotechnology companies. The team is now investigating other enzymes that might benefit from monobody technology, and is working with an industry partner to develop monobody-modified beta-galactosidase for commercial use.

"For now, this technology is most useful when restricting the starting material that enzymes use from larger to smaller," Koide said. "There are many cases in which one would like to produce only smaller products, and many more interesting possibilities that we are excited to explore."