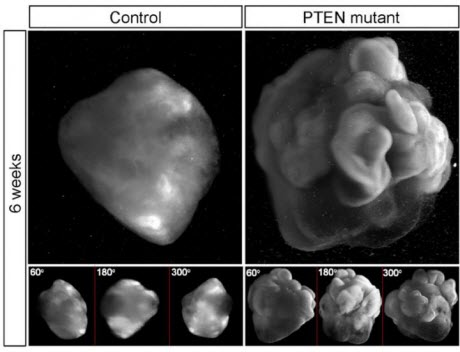 360 degree imaging of human brain organoids using lightsheet microscope, showing smooth appearance of normal organoid (left) and surface folding in PTEN mutant organoid (right)—as well as the mutant organoid's large size.Image credit: Yun Li and Julien MuffatCAMBRIDGE, Mass. — One of the most significant ways in which the human brain is unique is the size and structure of the cerebral cortex. But what drives the growth of the human cortex, likely the foundation for our unique intellectual abilities?

In research published in the journal Cell Stem Cell—in a study entitled, Induction of expansion and folding in human cerebral organoids—researchers at Whitehead Institute provide insight into a specific gene pathway that appears to regulate the growth, structure, and organization of the human cortex. They also demonstrate that 3D human cerebral organoids—miniature, lab-grown versions of specific brain structures—can be effective in modeling the molecular, cellular, and anatomical processes of human brain development. And they suggest a new path for identifying the cells affected by Zika virus.

These findings lend support to the notion that an increase in the proliferative potential of NPs contributes to the expansion of the human cerebral neocortex, and the emergence of surface folding.

With normal NPs, the human organoid developed into relatively small cell clusters with smooth surface appearance, displaying some features of very early development of a human cortex. However, deleting PTEN allowed the progenitor population to continue expanding and delayed their differentiation into specific kinds of neurons—both key features of the developing human cortex. "Because the PTEN mutant NPs experienced more rounds of division and retained their progenitor state for an extended period, the organoids grew significantly larger and had substantially folded cortical tissue," explains Julien Muffat, also a lead author and post-doctoral researcher at Whitehead Institute.

In contrast, they found that while PTEN deletion in mouse cells does create a somewhat larger than normal organoid, it does not lead to significant NP expansion or to folding. "Previous studies have suggested that abnormal variation in PTEN expression may play an important role in driving brain development conditions leading to syndromes such as autism spectrum disorders," says Rudolf Jaenisch, Founding Member of Whitehead Institute and senior author of the study. "Our findings suggest that the PTEN pathway is also an important mechanism for controlling brain-structure differences observed between species."

The Whitehead investigators chose to focus on the PTEN gene because it had previously been shown to have some function in cortical development and to have a role in regulating progenitor cells of various lineages. Notably PTEN loss-of-function mutations have been associated with human macrocephaly.

In this study, deletion of the PTEN gene increased activation of the PI3K-AKT pathway and thereby enhanced AKT activity in the human NPs comprising the 3D human cerebral organoids; it promoted cell cycle re-entry and transiently delayed neuronal differentiation, resulting in a marked expansion of the radial glia and intermediate progenitor population. Validating the molecular mechanism at work with PTEN, the investigators used pharmacological AKT inhibitors to reverse the effect of the PTEN deletion. They also found that they could regulate the degree of expansion and folding by tuning the strength of AKT signaling—with reduced signaling resulting in smaller and smooth organoids, and increased signaling producing larger and more folded organoids.

Related Article: An Accessible Approach to Making a Mini-Brain

Finally, the researchers utilized the 3D human cerebral organoid system to show that infection with Zika virus impairs cortical growth and folding. In the organoids, Zika infection at the onset of surface folding (day 19 of development) led to widespread apoptosis; and, ten days later, it had severely hampered organoid growth and surface folding. Zika infection of four-week-old organoids, showed that PTEN mutant organoids were much more susceptible to infection than normal control organoids; notably, they showed increased apoptosis and decreased proliferation of progenitor cells.

"Although not an original goal of our study, we have demonstrated that 3D human cortical organoids can be very effective for Zika modeling—better enabling researchers to observe how human brain tissue reacts to the infection and to test potential treatments," Li says.