Earth requires fuel to drive plate tectonics, volcanoes, and its magnetic field. Like a hybrid car, Earth taps two sources of energy to run its engine: primordial energy from assembling the planet and nuclear energy from the heat produced during natural radioactive decay. Scientists have developed numerous models to predict how much fuel remains inside Earth to drive its engines—and estimates vary widely—but the true amount remains unknown.

In a new paper, a team of geologists and neutrino physicists boldly claims it will be able to determine by 2025 how much nuclear fuel and radioactive power remain in the Earth’s tank. The study, authored by scientists from the University of Maryland, Charles University in Prague, and the Chinese Academy of Geological Sciences, was published on September 9, 2016, in the journal Nature Scientific Reports.

“I am one of those scientists who has created a compositional model of the Earth and predicted the amount of fuel inside Earth today,” said one of the study’s authors William McDonough, a professor of geology at the University of Maryland. “We’re in a field of guesses. At this point in my career, I don’t care if I’m right or wrong, I just want to know the answer.” 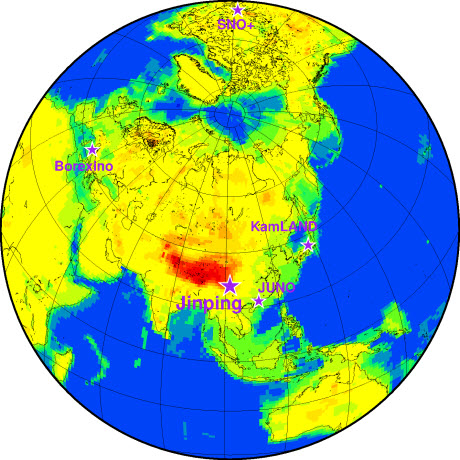 Detecting antineutrinos requires a huge detector the size of a small office building, housed about a mile underground to shield it from cosmic rays that could yield false positive results. Inside the detector, scientists detect antineutrinos when they crash into a hydrogen atom. The collision produces two characteristic light flashes that unequivocally announce the event. The number of events scientists detect relates directly to the number of atoms of uranium and thorium inside the Earth. And the decay of these elements, along with potassium, fuels the vast majority of the heat in the Earth’s interior.

To date, detecting antineutrinos has been painfully slow, with scientists recording only about 16 events per year from the underground detectors KamLAND in Japan and Borexino in Italy. However, researchers predict that three new detectors expected to come online by 2022—the SNO+ detector in Canada and the Jinping and JUNO detectors in China—will add 520 more events per year to the data stream.

“Once we collect three years of antineutrino data from all five detectors, we are confident that we will have developed an accurate fuel gauge for the Earth and be able to calculate the amount of remaining fuel inside Earth,” said McDonough.

“Knowing exactly how much radioactive power there is in the Earth will tell us about Earth’s consumption rate in the past and its future fuel budget,” said McDonough. “By showing how fast the planet has cooled down since its birth, we can estimate how long this fuel will last.”

This research was supported by the National Science Foundation (Award Nos. EAR 1068097 and EAR 1067983), and by Fundamental Research Grants for Central Public Research Organizations, Chinese Academy of Geological Sciences (Award No. YYWF201623). The content of this article does not necessarily reflect the views of these organizations.