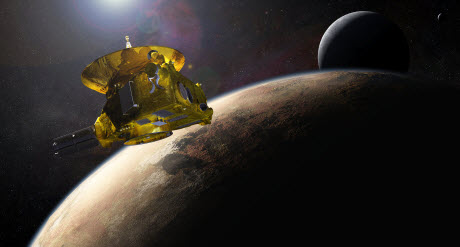 Artist’s conception of the New Horizons spacecraft as it passes by Pluto and its largest moon, Charon.Image courtesy of the University of VirginiaLess than seven months later, astronomers reclassified it as a “dwarf planet.” But that hasn’t slowed down New Horizons, which is cruising along at about 30,000 mph. It is now within close reach of Pluto and is sending back the first images ever of the dwarf planet.

The view will just keep getting better as the craft passes within 8,000 miles of the planet’s surface on Tuesday, providing new insights to planetary formation.

On Tuesday morning, two University of Virginia scientists, along with hundreds of other scientists and engineers from NASA and research universities across the country, will be in attendance at the Johns Hopkins Applied Physics Laboratory – essentially mission control – as the spacecraft returns data from its closest approach, the climax of its months-long encounter with Pluto.

“We really don’t know exactly what we will see. We’ve never been to this part of the solar system before,” said U.Va. astronomer Anne Verbiscer, who has been involved with NASA’s New Horizons mission since 2014.

“I am working with Hubble Space Telescope data to help refine targeting, so New Horizons can explore entirely new classes of outer-solar-system objects,” she said.

Verbiscer also has helped assess the risks of the spacecraft striking objects – rocks and ice – that potentially could destroy the spacecraft during its Pluto fly-by.

As data streams in from New Horizons over the next year or so, Verbiscer will work with two teams of scientists to gain new understanding of the surfaces of Pluto and its largest moon, Charon, and how they may have developed and changed since their births about 4.6 billion years ago.

Alan Howard, a planetary geologist with U.Va.’s environmental sciences department, also will witness the fly-by from the Hopkins Applied Physics Laboratory. Like Verbiscer, he will be among the first to begin interpreting data and images as they arrive from New Horizons.

“We will be getting our first up-close views of Pluto’s surface, an amazing and wonderful opportunity,” he said. “I will be looking at the landforms, trying to understand how they may have become that way, based on what we know about the geology of Earth and other planets.”

Howard and Verbiscer will be looking at areas where asteroids may have impacted the dwarf planet, areas of erosion, ice deposits, and how the atmosphere has interacted with the surface. Pluto’s surface is likely to be very different from other planets in our solar system because it is so much farther from the sun – averaging 3.6 billion miles from the sun, about 40 times farther than is Earth.

The dwarf planet follows an oval-shaped orbit that brings it significantly closer to and farther from the sun at different points during its 248-year orbit. Astronomers and planetary geologists believe that Pluto’s atmosphere, likely made up primarily of nitrogen and some methane, undergoes lengthy periods of freezing and thawing. The gravity on Pluto is very low, about one-20th of Earth’s, likely causing the atmosphere to swell when it’s in its thawed stage.

But scientists really won’t know for sure until New Horizons gets up close and sends back data. Scientists will pore over that data set and those images for years, gaining new understanding of not only one “dwarf” planet and its moons, but also, by inference, how other planets in this and other solar systems may have come together and changed over billions of years under a range of forces and influences.

“We expect to be surprised,” Howard said. “There won’t be a dull moment.”

“I expect the unexpected,” Verbiscer said. “And a lot of jaws will be dropping in awe as those first close images come in.”