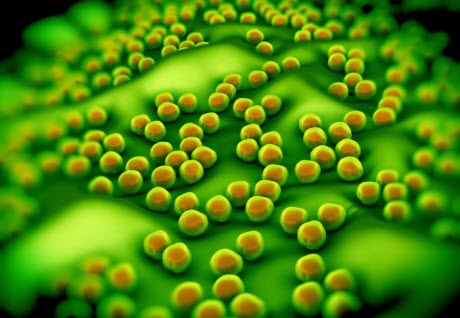 The bacteria are a common source of food poisoning and are resistant to heat and high salt concentrations, which are used for food preparation and storage. The team hope to use this knowledge to develop a treatment that prevents food poisoning by ensuring all bacteria in food are killed.

They are also investigating whether these findings could aid the development of a treatment for patients that would work alongside conventional antibiotics.

Staphylococcus aureus bacterium live naturally on skin or in the nose of one in four people. However, if the bugs get inside the body they can cause serious infection, blood poisoning, and even death. A ‘superbug’ form of the bacteria, called MRSA, has also developed resistance to the antibiotic methicillin. Staphylococcus aureus can also trigger food poisoning, commonly through contaminated meat products such as ham, as well as sandwiches, salads, and dairy products.

In a new study, the Imperial team have discovered how Staphylococcus aureus regulates its salt intake. Disrupting this mechanism means the bacteria either absorb too much salt from their environment, or lose too much water—causing them to dehydrate and die.

Professor Angelika Gründling, lead author of the research from the Department of Medicine at Imperial said: “The Staphylococcus aureus bacterium is a key pathogen and causes many serious infections in patients. With this research we now have a better understanding of how the bacteria cope with salt stress. Although this research is at an early stage, we hope this knowledge will someday help us to prevent food borne staphylococcal infections, as well as open new possibilities for a type of treatment that may work alongside antibiotics.”

In the new study, published in the journal Science Signaling, the team looked at MRSA cells in the lab and found that a signalling molecule called cyclic di-AMP is critical for the process through which the bacteria regulate their salt levels.

Staphylococcus aureus are notoriously resistant to high-salt concentrations, although up until now scientists have been unclear why. In the current study the team revealed that when the signalling molecule detects the bacterium is in a high-salt environment, the molecule latches onto several ‘transporter’ proteins to signal to them to respond and protect the cell.

High salt concentrations act to pull water out of a cell—which is why we feel thirsty after eating salty foods.

The researchers were able to disrupt this salt mechanism, and found that by increasing the signal to the transporter protein, the number of these miniature sponges was significantly reduced. Inhibiting these salt protection mechanisms renders MRSA cells more sensitive to salt—which could ultimately lead to the destruction of the bacterial cells.

Experiments from other teams have revealed a similar mechanism is present in Listeria bacteria, which are also a common source of food poisoning.

Dr Christopher Schuster, co-author of the research from the Department of Medicine at Imperial, added: “Many food preservation methods use salt to keep food fresh and prevent bacteria from multiplying. However, there are always some bacteria such as Staphylococcus aureus that are resistant to these high salt levels, and survive. But if we can develop some form of treatment that interrupts these signalling molecules, we could ensure salt kills all of the bacteria.”

The team are now further exploring this mechanism, in the hope of finding the exact way the signalling molecule regulates the transporter protein. They are also investigating what other types of molecular sponges are involved in this process.

The research was funded by the Wellcome Trust, the European Commission, and the German Research Foundation.