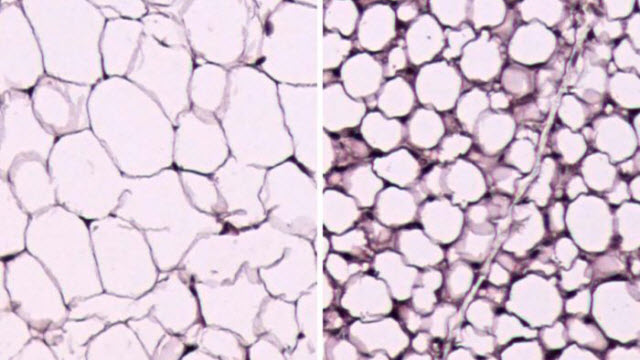 Working in mice, researchers at Washington University School of Medicine in St. Louis have identified a way to convert white fat, which stores calories, into brown fat that burns them. Above are white fat cells from a normal mouse (left) and from a mouse lacking the PexRAP protein (right), which interferes with the conversion of calorie-storing fat cells into calorie-burning cells. The fat cells without PexRAP store fewer calories and look more like brown fat cells.Image credit: IRFAN J. LODHI

There’s good fat and bad fat in our bodies. The good fat helps burn calories, while the bad fat hoards calories, contributing to weight gain and obesity. Now, new research at Washington University School of Medicine in St. Louis has identified a way to convert bad, white fat into good, brown fat, at least in mice.

The findings raise the prospect of developing more effective treatments, in people, for obesity and diabetes related to weight gain.

The study was published Sept. 19 in the journal Cell Reports.

White fat stores calories and pads our bellies, hips, and thighs. In contrast, brown fat, found near our necks and shoulders, burns calories through a process that generates heat.

Related Article: Can You Feast While Dieting?

The researchers found that blocking the activity of a specific protein in white fat triggered the fat to begin to brown into beige fat, a type of fat in between white and brown. Blocking the protein to create beige fat caused the fat cells to heat up and burn calories. 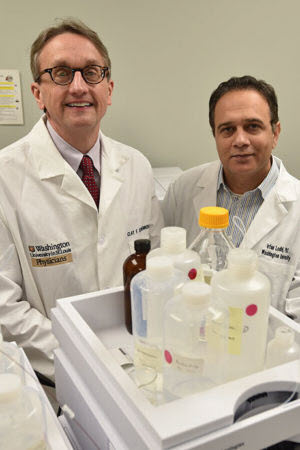 Clay F. Semenkovich, MD (left), and Irfan J. Lodhi, PhD, are part of a team that has identified a protein that may be key to converting white fat into brown fat to help those with obesity burn more calories.Photo credit: ROBERT BOSTON“Our goal is to find a way to treat or prevent obesity,” said first author Irfan J. Lodhi, PhD. “Our research suggests that by targeting a protein in white fat, we can convert bad fat into a type of fat that fights obesity.”

Beige fat was discovered in adult humans in 2015. Though it is almost like an intermediary between white fat and brown fat, Lodhi, an assistant professor of medicine in the Division of Endocrinology, Metabolism and Lipid Research, said it functions more like brown fat and can protect against obesity.

His team conducted a series of experiments in mice, creating a genetic strain of animals that didn’t make a key protein in their white fat cells. Those mice had more beige fat and were leaner than their littermates, even when they ate the same amount of food as other mice. They also burned more calories.

“Mice normally have very low levels of the protein, called PexRAP, in their brown fat,” he said. “When we put the mice into a cold environment, levels of the protein also decreased in white fat, allowing that fat to behave more like brown fat. Cold induces brown and beige fats to burn stored energy and produce heat.”

When Lodhi’s team blocked PexRAP in the animals, the mice converted white fat into beige fat that could burn calories.

More than two-thirds of adults in the United States are either overweight or obese. Some 30 million people have diabetes. These findings study suggest that if therapies could help convert their bad fat into good fat, those numbers might start to decline.

Lodhi said if the PexRAP protein could be blocked safely in white fat cells in humans, people might have an easier time losing weight.

“The challenge will be finding safe ways to do that without causing a person to overheat or develop a fever, but drug developers now have a good target,” he said.

This work was supported by the National Institute of Diabetes and Digestive and Kidney Diseases of the National Institutes of Health (NIH), grant numbers R00 DK094874, DK101392 and DK020579. Additional funding was provided by startup funds from the Washington University Department of Medicine and a Pilot & Feasibility Grant from the Washington University Diabetes Research Center. Additional support was provided by the China Scholarship Council.

With Extra Sugar, Leaves Get Fat Too

With Extra Sugar, Leaves Get Fat Too