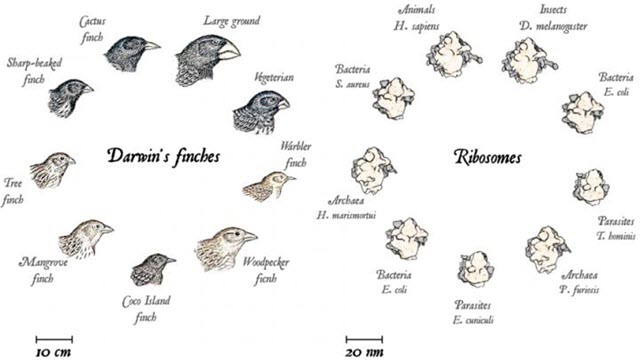 A new study by Yale scientists provides a key insight into a milestone event in the early evolution of life on Earth—the origin of the cell nucleus and complex cells called eukaryotes.

While simple prokaryotic bacteria formed within the first billion years of the Earth, the origin of eurkaryotes, the first cells with nuclei, took much longer. Dating back to between 1.7 and 2.7 billion years ago, an ancient prokaryote was first transformed with a compartment, the nucleus, designed to keep their DNA material more protected from the environment (such as harmful UV damage). From this ancient event, relatively simple organisms, such as bacteria were transformed into more sophisticated ones that ultimately gave rise to all modern animals, plants and fungi.

The details of this key event have remained elusive for many years because not a single transitional fossil has been found to date.

Now, in a study led by Dr. Sergey Melnikov, from the Dieter Söll Laboratory in the Department of Molecular Biophysics and Biochemistry at Yale University, has finally found these missing fossils. To do so, they relied not on unearthing clay or rocks but peering deep inside current living cells, known as Archaea—the organisms that are believed to most closely resemble the ancient intermediates between bacteria and the more complex cells that we now know as eukaryotic cells.

These transitional forms are nothing like the traditional fossils we think of, such as dinosaur bones deposited in the ground or insects trapped in amber. Known as ribosomal proteins, these particular transitional forms are about 100-million times smaller than our bodies. Melnikov and his colleagues discovered that ribosomal proteins can be used as living "molecular fossils," whose ancient origin and structure may hold the key to understanding the origin of the cell nucleus.

"Simple lifeforms, such as bacteria, are analogous to a studio apartment: they have a single interior space which is not subdivided into separate rooms or compartments. By contrast, more complex organisms, such as fungi, animals, and plants, are made up of cells that are separated into multiple compartments," explained Melnikov. "These microscopic compartments are connected to one another via 'doors' and 'gates.' To pass through these doors and gates, the molecules that inhabit living cells must carry special ID badges, some of which are called nuclear localization signals, or NLSs."

Suprisingly, they found four proteins—uL3, uL15, uL18, and uS12—to have NLS-type motifs not only in the Eukarya but also in the Archaea. "Contrary to our expectations, we found that NLS-type motifs are conserved across all the archaeal branches, including the most ancient superphylum, called DPANN," said Melnikov.

But since Archaea don't have nuclei, the logical question which then arose was, why do they have these IDs? And what was the original biological function of these IDs in non-compartmentalized cells?"

"If you think about an equivalent to our discovery in the macroscopic world, it is similar to discoveries made during the last century of bird-like dinosaurs such as Caudipteryx zoui," said Melnikov. "These ancient flightless birds have illustrated that it took multiple millions of years for dinosaurs to develop wings. Yet, strikingly, for the first few million years their wings were not good enough to support flight."

Similarly, the study by Melnikov and colleagues suggests that, even though NLSs may not initially have emerged to allow cellular molecules to pass through microscopic doors and gates between cellular compartments, they could have emerged to fulfill a similar biological function—to help molecules get to their proper biological partners.

As Melnikov explains: "Our analysis shows that in complex cells the very same IDs that allow proteins to pass through the microscopic gates are also used to recognize biological partners of these proteins. In other words, in complex cells, the IDs fulfill two conceptually similar biological functions. In the Archaea, however, these IDs play just one of these functions—these IDs, or NLSs, help proteins to recognize their biological partners and distinguish them from the thousands of other molecules that float in a cell."

But what led to the evolution of these IDs among cellular proteins in the first place?

As Melnikov explains, "When life first emerged on the face of our planet, the earliest life forms were likely made of a very limited number of molecules. Therefore, it was relatively easy for these molecules to find one specific partner among all the other molecules in a living cell. However, as cells grew in size and complexity, it is possible, even probable, that the old rules of specific interactions between cellular molecules had to be redefined, and this is how the IDs were introduced into the structure of cellular proteins—to help these proteins identify their molecular partners more easily in the complex environment of a complex cell. Coming back to the analogy with bird-like dinosaurs, our study illustrates the remarkable similarity between how evolution happens in the macroscopic world and how evolution happens in the world that Darwin never saw—the microscopic world of invisible molecules that inhabit living cells."