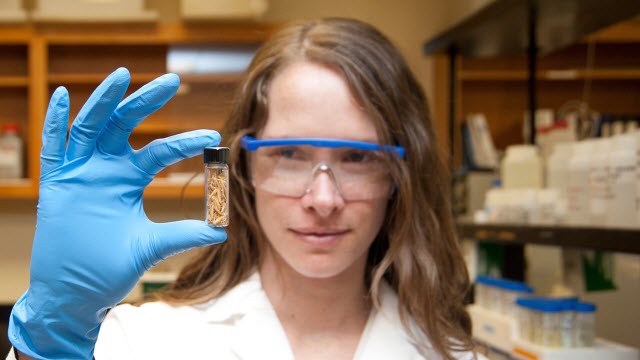 CANR's Angelia Seyfferth is leading a team that is looking at the use of rice husk to reduce arsenic levels in the vital grain.Photo credit: Wenbo Fan

A team of researchers at the University of Delaware has found that incorporating rice husks into the soil can decrease toxic inorganic arsenic levels in rice grain by 25 to 50 percent without negatively affecting yield.

This research could have important implications for developing countries whose populations rely on rice as a staple of their diets and are in need of cheap, readily available material to improve soil quality and decrease arsenic levels that threaten human health.

The team is led by Angelia Seyfferth, assistant professor in the Department of Plant and Soil Sciences in the College of Agriculture and Natural Resources, who worked with a group of research technicians and undergraduate researchers from diverse areas of study on the project, the results of which were recently published in the Journal of Agricultural and Food Chemistry, which is an American Chemical Society journal.

The work was funded by Seyfferth’s National Science Foundation (NSF) Faculty Early Career Development Award, an NSF Division of Biological Infrastructure award, and an award from the UD Research Foundation.

The work builds on previous research led by Seyfferth that looked at soil incubations of rice husk, rice straw, and rice ash.

For this study, the researchers grew rice plants in the soil amended with residues and rather than using rice straw—which they found from the previous study has negative impacts on the environment—and they focused on the rice husk, which is silica rich, has less arsenic in the tissues, and promotes less arsenic release from not only the tissues but also from the soil compared to the straw.

They also looked at rice ash, which Seyfferth said is basically a charred rice husk material, as an amendment.

“We used those two materials and compared the growth of rice with those materials incorporated into a soil that had background levels of arsenic and relatively low plant-available silicon,” said Seyfferth. “The big finding is that when we grow these plants in the fresh husk amended soil, we see a 25-50 percent decrease in the inorganic arsenic in the grains which is the most toxic form of arsenic. So right away, just by putting this material into soil, we can make the plants healthier and alter the toxic form of arsenic that’s in the grain which has direct implications for human health.”

Being a silica rich material is important for reducing the amount of arsenic in the rice plant because the mechanism for uptake of arsenite, which is the most dominant form of arsenic in flooded rice paddies, shares a transport pathway with dissolved silicon. This finding was published in a paper that came out in 2008 led by Jian Feng Ma, a Japanese researcher, and Seyfferth said that it confirmed some of her earlier suspicions about arsenic and silicon.

Although she had done some research with synthetic silicon fertilizers that showed promise for decreasing arsenic in the grains, Seyfferth said it wasn’t until she went to Cambodia and saw the vastness of rice paddies and how much rice residue is being generated from the production of rice globally that she really wanted to explore using some of those materials as silica sources.

“In Cambodia and in many other rice growing regions, the plants are grown in the soil and then when they harvest, they remove the straw and all of the above ground portion, so they leave the roots in place but most of the silicon is in the straw and also in the husk,” said Seyfferth.

When rice comes right off the plant, it is encased in a husk material, and when that gets removed to get to the grain, the leftover husk has a lot of silicon.

“Usually, this material is just put in piles and the engineering industry is always coming up with new and interesting things to do with it. When I was there, seeing these giant piles of husks that were double my height and incredibly vast, I looked at that and I said, ‘Wow, look at all that silicon,’” said Seyfferth.

In a natural environment, those silica rich tissues would get re-incorporated but when rice is grown and the tissues are removed and taken off site, that loop is disrupted and the silica loss is exacerbated.

“By incorporating this, we’re putting that silica back, which as we show can decrease inorganic arsenic in the grain but it also can provide other nutrients so maybe more phosphorous, more nitrogen as sort of an organic fertilizer without the need for more chemical fertilizer. Then, having more silicon also makes the plants more resistant to other stresses like fungal pathogens,” said Seyfferth.

Seyfferth said that one of the exciting aspects of this project was getting to work with so many undergraduate researchers who were all co-authors on the paper.

“Working with the undergraduate researchers, I think that everybody wins in that scenario. They get research experience which helps prepare them for their next step whether it’s graduate school or industry. Our research group gets more help and more hands means light work or that we can do more things and it’s just fun to see them get motivated, to get engaged enough to get co-authorship on papers,” said Seyfferth.