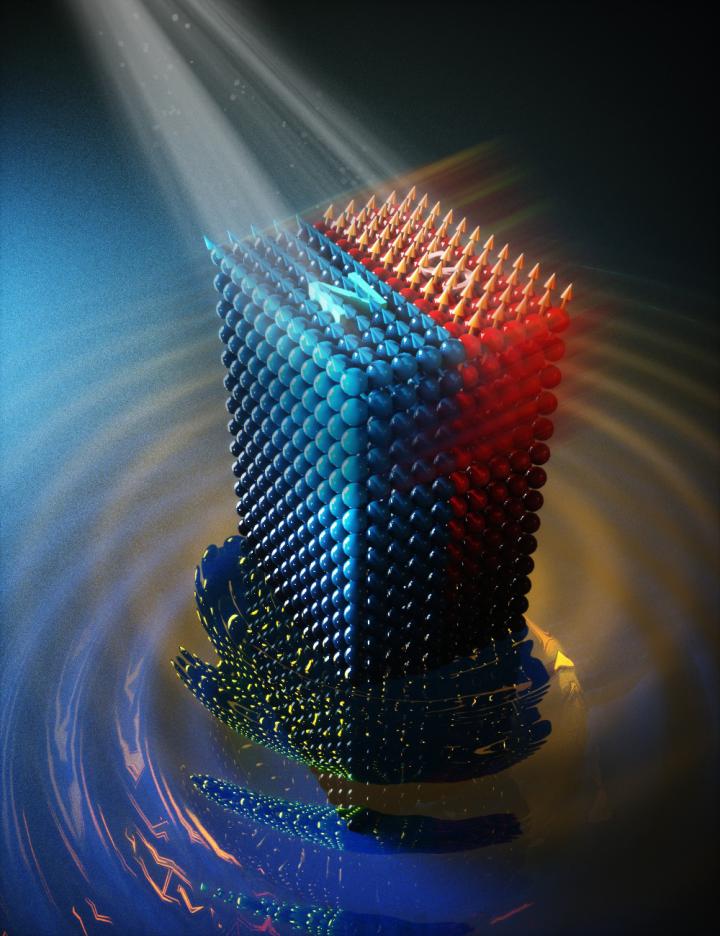 Fast and energy-efficient future data processing technologies are on the horizon after an international team of scientists successfully manipulated magnets at the atomic level.

These materials host trillions of mutually aligned elementary magnetic moments or "spins," whose alignment is largely governed by the arrangement of the atoms in the crystal lattice.

The spin can be seen as an elementary "needle of a compass," typically depicted as an arrow showing the direction from north to south poles. In magnets all spins are aligned along the same direction by the force called exchange interaction. The exchange interaction is one of the strongest quantum effects which is responsible for the very existence of magnetic materials.

The ever-growing demand for efficient magnetic data processing calls for novel means to manipulate the magnetic state and manipulating the exchange interaction would be the most efficient and ultimately fastest way to control magnetism.

To achieve this result, the researchers used the fastest and the strongest stimulus available: ultrashort laser pulse excitation. They used light to optically stimulate specific atomic vibrations of the magnet's crystal lattice which extensively disturbed and distorted the structure of the material.

The results of this study are published in the journal Nature Materials by the international team from Lancaster, Delft, Nijmegen, Liege, and Kiev.

PhD student Jorrit Hortensius from the Technical University of Delft said: "We optically shake the lattice of a magnet that is made up of alternating up and down small magnetic moments and therefore does not have a net magnetization, unlike the familiar fridge magnets."

After shaking the crystal for a very short period of time, the researchers measured how the magnetic properties evolve directly in time. Following the shaking, the magnetic system of the antiferromagnet changes, such that a net magnetization appears: for a fraction of time the material becomes similar to the everyday fridge magnets.

This all occurs within an unprecedentedly short time of less than a few picoseconds (millionth of a millionth of a second). This time is not only orders of magnitude shorter than the recording time in modern computer hard drives, but also exactly matches the fundamental limit for the magnetization switching.

"It has long been thought that the control of magnetism by atomic vibrations is restricted to acoustic excitations (sound waves) and cannot be faster than nanoseconds," Mikhaylovskiy explains. "We have reduced the magnetic switching time by 1,000 times—that is a major milestone in itself."

Dr. Dmytro Afanasiev from the Technical University of Delft adds: "We believe that our findings will stimulate further research into exploring and understanding the exact mechanisms governing the ultrafast lattice control of the magnetic state."

- This press release was originally published on the Lancaster University website. It has been edited for style