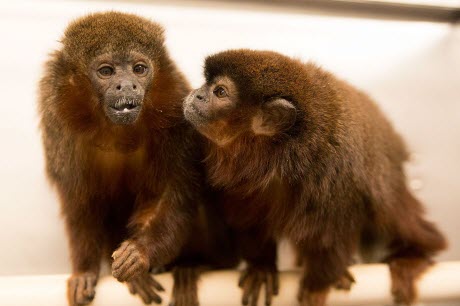 Titi monkeys housed at the California National Primate Research Center form lifelong, monogamous pair bonds. A recent study investigated jealousy in pair-bonded primate species, offering insight into human behavior and emotions.Photo credit: K.West/CNPRCIt's perhaps one of the most common emotions to feel in a relationship, but one that's virtually untouched when it comes to studying relationships in monogamous primate species. What scientists have recently discovered about jealousy in pair-bonded titi monkeys at the California National Primate Research Center (CNPRC) offers insight into human emotions and their consequences.

Coppery titi monkeys are among the world's three-to-five percent of animals that form lifelong, monogamous pair bonds. Much like humans, the titi monkeys form an attachment with their partner, exhibit mate-guarding behavior and become distressed when they are separated from each other.

"They have behavior and emotions that we recognize as close to how we feel," said Dr. Karen Bales, the CNPRC Core Scientist who conducted the study, along with Dr. Nicole Maninger, a post-doctoral associate at the CNPRC. "The idea behind all of this is we have to first understand the way that the neurobiology of social bonding works normally before we can understand what happens in situations where social bonding, social behavior or social communication is impaired. For instance, in disorders like autism or schizophrenia."

When a titi monkey is feeling jealous it typically arches its back, lashing its tail back and forth and is generally more emotionally aroused, explains Bales. Male titi monkeys have also been known to physically hold their partner back from interacting with another male. While female titi monkeys exhibit jealous behaviors much like their male counterparts, they do so in a less intense manner making male titi monkeys ideal for the study, Bales said. While the monkeys involved in the CNPRC jealousy study did not exhibit many of these behaviors, possibly due to the strange surroundings, there were endocrine signs of social stress.

The monkeys exhibited hormonal changes, specifically a rise in testosterone and cortisol levels. The rise of cortisol is an indication of social stress and in this study, it correlated directly with the amount of time that the male monkeys watched their partners with the stranger male. The rise of testosterone is associated with mating-related aggression and completion, Bales said.

Brain scans performed on the monkeys revealed heightened activity in the cingulate cortex, an area of the brain that is associated with social exclusion in humans. The researchers also noticed heightened activity in the lateral septum, an area of the brain that has been associated with aggressive behavior. The jealousy exhibited by the male monkeys, however, is not necessarily entirely negative.

"Trying to keep your mate away from your opponent is evolutionary geared toward preserving the relationship," Dr. Bales said.

The results of the study give important clues that we can use to approach health and welfare problems such as addiction, autism, and domestic violence, Bales said. The full jealousy study is available online in the open-access journal Frontiers in Ecology and Evolution.