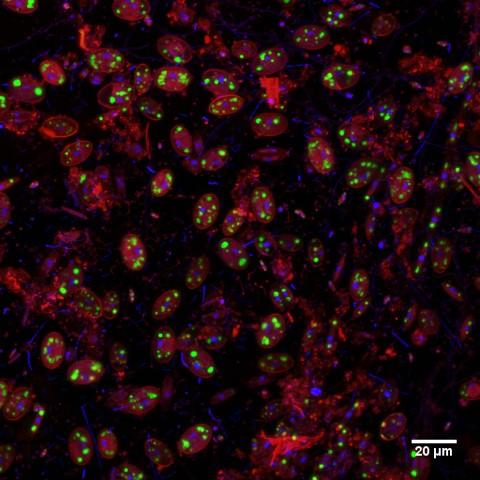 An image of diatoms colonizing polypropylene after one week incubation in the ocean. Note the green chloroplasts in the 'football shaped' diatom frustules (the cell walls made of glass stained red). Diatoms at such high coverage have the ability to make plastics sink due to their dense glass cell walls. Cellular DNA shows up as blue due to the stain the intercalates in between the DNA base pairs. The blue dotted lines are filamentous bacteria consisting of chains of cells, each blue dot represents a single cell with a bundle of DNA at the center. The scale bar is 20 microns in length.
Shiye Zhao, PhD

Trillions of plastic debris fragments are afloat at sea, creating the "perfect storm" for microbial colonization. Introduced more than 50 years ago, plastic substrates are a novel microbial habitat in the world's oceans. This "plastisphere" consists of a complex community comprised of bacterial, archaeal, and eukaryotic microorganisms and microscopic animals.

These unnatural additions to sea surface waters and the large quantity of cells and biomass carried by plastic debris has the potential to impact biodiversity, ecological functions and biogeochemical cycles within the ocean. Biofilm formation in the marine environment—a collective of one or more types of microorganisms that can grow on many different surfaces—is a complex process, involving many variables.

While several studies have surveyed microbial diversity and quantified specific members of these biofilm habitats, a new study is the first to holistically quantify total cell inventories under in situ conditions. This study is fundamentally different from others due to the relatively non-biased visualization methods used to arrive at a quantitative number for biomass, which is the first estimate of its kind.

Researchers from Florida Atlantic University's Harbor Branch Oceanographic Institute and Harriet L. Wilkes Honors College, in collaboration with Utrecht University, Netherlands, the University of Amsterdam, and The Royal Netherlands Institute for Sea Research (NIOZ), examined cell abundances, size, cellular carbon mass, and how photosynthetic cells differ on polymeric and glass substrates over time. They investigated nanoparticle generation from plastic such as polystyrene, which is known to disintegrate into nanoparticles in sunlight and ultraviolet radiation, and how this might disrupt microalgae.

Results of the study, published in the ISME Journal, a monthly publication of the International Society for Microbial Ecology, reveal that by measuring the average microbial biomass carrying capacity of different plastic polymers and, by extension, plastic marine debris in the global ocean, conservative estimates suggest that about one percent of microbial cells in the ocean surface microlayer inhabit plastic debris globally. This mass of cells would not exist if plastic debris was not in the ocean, and therefore, represents a disruption of the proportions of native flora in that habitat.

"In the open ocean, nutrients are limiting. Just like we need to put fertilizer on a garden, microorganisms in the ocean are limited by nitrogen, iron or phosphorous depending upon where they are—except in the open ocean, there is typically no fertilizer, so something has to die for another organism to live," said Tracy Mincer, PhD, lead author and an assistant professor of biology/bio-geochemistry at FAU's Harbor Branch and Wilkes Honors College. "With the advantage of a surface, which concentrates nutrients, organisms colonizing plastics in the ocean are taking up those limiting nutrients that normally would have been consumed or out-competed by free-living microbes. So essentially, these microbes on plastics are taking habitat space away and represent the beginning of a regime shift for these habitats."

Using confocal laser scanning microscopy with sophisticated imaging software, researchers directly obtained data ranging from cell counts, size, and the characterization of microbial morphotypes to complete three-dimensional constructs. They tested a range of chemically distinct substrates that included polypropylene, polystyrene, polyethylene, and glass. Polypropylene is used by the automotive industry, for consumer goods such as packaging, industrial applications, and the furniture market; polystyrene is used to make clear products like food packing or laboratory equipment; and polyethylene is the most widely used plastic in the world, ranging from products such as clear food wrap to shopping bags to detergent bottles.

Data from the confocal laser scanning microscopy showed that early biofilms displayed a high proportion of diatoms (unicellular eukaryotic microalgae that have cell walls made of glass). These diatoms could play a key role in the sinking of plastic debris. Unexpectedly, plastic substrates appeared to reduce the growth of photosynthetic cells after eight weeks compared to glass.

"The quantification of cell numbers and microbial biomass on plastic marine debris is crucial for understanding the implications of plastic marine debris on oceanic ecosystems," said Shiye Zhao, PhD, first author and a post-doctoral fellow at FAU's Harbor Branch. "Future efforts should focus on how this biomass fluctuates with season and latitude and its potential to perturb the flux of nutrients in the upper layers of the ocean."