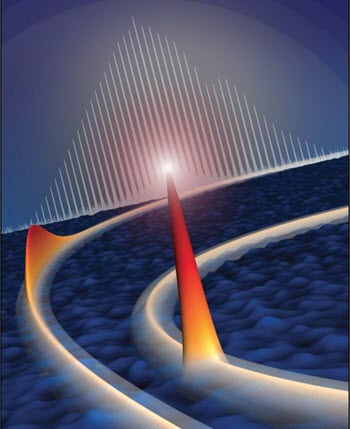 Drawing of a pulse propogating in the chipCREDIT: EPic Lab, University of Sussex

Scientists in the Emergent Photonics Lab (EPic Lab) at the University of Sussex have made a breakthrough to a crucial element of an atomic clock—devices that could reduce our reliance on satellite mapping in the future—using cutting-edge laser beam technology. Their development greatly improves the efficiency of the lancet (which in a traditional clock is responsible for counting), by 80 percent—something that scientists around the world have been racing to achieve.

Currently, the UK is reliant on the US and the EU for the satellite mapping that many of us have on our phones and in our cars. That makes us vulnerable not only to the whims of international politics, but also to the availability of satellite signal.

Dr Alessia Pasquazi from the EPic Lab in the School of Mathematical and Physical Sciences at the University of Sussex explains the breakthrough: "With a portable atomic clock, an ambulance, for example, will be able to still access their mapping whilst in a tunnel, and a commuter will be able to plan their route whilst on the underground or without mobile phone signal in the countryside. Portable atomic clocks would work on an extremely accurate form of geo-mapping, enabling access to your location and planned route without the need for satellite signal.

"Our breakthrough improves the efficiency of the part of the clock responsible for counting by 80 percent. This takes us one step closer to seeing portable atomic clocks replacing satellite mapping, like GPS, which could happen within 20 years. This technology will changes people's everyday lives as well as potentially being applicable in driverless cars, drones, and the aerospace industry. It's exciting that this development has happened here at Sussex."

Optical atomic clocks are at the pinnacle of time measuring devices, losing less than one second every 10 billion years. Curently though, they are massive devices, weighing hundreds of kilograms. In order to have an optimal practical function that could be utilized by your average person, their size needs to be greatly reduced while retaining the accuracy and speed of the large-scale clocks.

In an optical atomic clock, the reference (the pendulum in a traditional clock) is directly derived by the quantum property of a single atom confined in a chamber: it is the electromagnetic field of a light beam oscillating hundreds of trillions of times per second. The clock counting element required to work at this speed is an optical frequency comb—a highly specialized laser emitting, simultaneously, many precise colors, evenly spaced in frequency.

Micro-combs bring down the dimension of frequency combs by exploiting tiny devices named optical microresonators. These devices have captured the imagination of the scientific community world-wide over the past 10 years, with their promise of realizing the full potential of frequency combs in a compact form. However, they are delicate devices, complex to operate and typically do not meet the requirement of practical atomic clocks.

The breakthrough at the EPic Lab, detailed in a paper published this week in the journal Nature Photonics, is the demonstration an exceptionally efficient and robust micro-comb based on a unique kind of wave called a "laser cavity soliton."

Dr Pasquazi continues: "Solitons are special waves that are particularly robust to perturbation. Tsunamis, for instance, are water solitons. They can travel unperturbed for incredible distances; after the Japan earthquake in 2011 some of them even reached as far as the coast of California.

"Instead of using water, in our experiments performed by Dr Hualong Bao, we use pulses of light, confined in a tiny cavity on a chip. Our distinctive approach is to insert the chip in a laser based on optical fibers, the same used to deliver internet in our homes.

"The soliton that travels in this combination has the benefit of fully exploiting the micro-cavities' capabilities of generating many colors, whilst also offering the robustness and versatility of control of pulsed lasers. The next step is to transfer this chip-based technology to fiber technology—something that we're exceptionally well-placed at the University of Sussex to achieve."

Professor Marco Peccianti from the University of Sussex EPic Lab adds: "We are moving towards the integration of our device with that of the ultra-compact atomic reference (or pendulum) developed by Professor Matthias Keller's research group here at the University of Sussex. Working together, we plan to develop a portable atomic clock that could revolutionise the way we count time in the future.

"Our development represents a significant step forward in the production of practical atomic clocks and we're extremely excited by our plans, which range from partnerships with the UK aerospace industry, which could come to fruition within five years, through to portable atomic clocks that could be housed in your phone and within driverless cars and drones within 20 years." 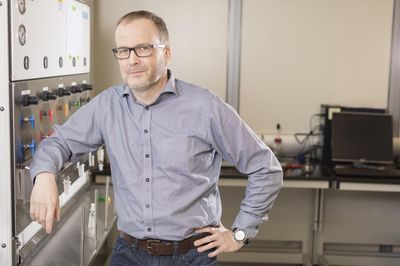 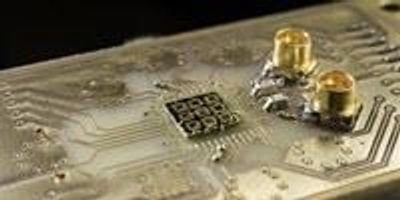 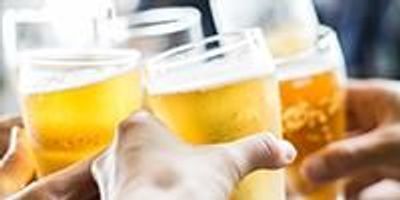 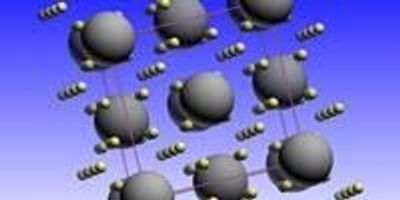