PHILADELPHIA (March 31, 2016) – New research from the Monell Center reveals that olfactory marker protein (OMP), a molecule found in the cells that detect odor molecules, plays a key role in regulating the speed and transmission of odor information to the brain. The findings solve a 30-year-old mystery regarding the function of OMP and increases understanding of how the olfactory system integrates information to transmit accurate data about odors and the messages they contain. 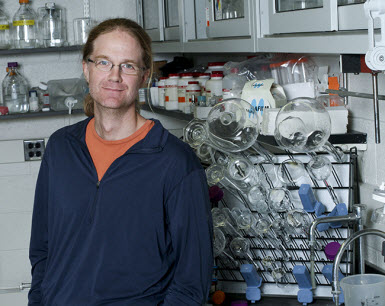 The sensory cells that detect odors and transmit this information to the brain are nerve cells known as olfactory receptor neurons (ORNs). Each ORN contains one specific type of olfactory receptor (OR) that determines which kind of odor molecule can activate the ORN. Humans have approximately 400 different types of ORs while mice have about 1000.

The number of odor molecules arriving in the nose at any one time is influenced both by a given odor’s strength (concentration) and by how frequently the animal breathes, or sniffs the air. The ORNs interpret and integrate the repetitively arriving information from odor molecules to send electrical signals called action potentials to the brain. The overall number of action potentials and the rate at which they are fired tells the brain that an odor is present and how strong that odor is.

The process of converting the chemical information from an odor molecule into an electrical signal is mediated by a complex sequence of molecular events within theORN called olfactory transduction. Scientists knew that OMP has a role in this process, but the exact nature of this role was unclear.

In the current study, published as a featured article in the Journal of Neuroscience, the Monell researchers used mice engineered to be missing OMP, called OMP knockout mice, to identify how OMP controls the ORNs’ responses to odors.

The findings revealed that OMP regulates odor processing by filtering ‘noisy’ signals so that incoming odor information is transmitted accurately.

When an odor is detected, the levels of a key molecule inside the ORN need to rise to a critical threshold before the ORN can fire an action potential. This molecule, called cyclic AMP (cAMP), then needs to return to baseline levels before the ORN can send another signal.

Reisert previously had found that each type of OR dictates a specific baseline level of cAMP activity in the related ORN. In the current study, the Monell scientists combined pharmacological and electrophysiological techniques to investigate OMP’s role in setting these different levels of cAMP.

The results revealed that ORNs from the OMP knockout mice had similar high levels of cAMP independent of which OR was expressed. This contrasted with the varied cAMP levels observed in ORNs from normal mice.

“What this tells us is that OMP dampens cAMP ’noise’ to allow the olfactory system to differentiate between ORs and to allow faithful transmission of odor information to the brain,” said Reisert.

Other findings revealed that ORNs from the OMP knockout mice were less able to integrate odor information over time, and specifically were less responsive to odors present for shorter amounts of time.

“Mice normally sniff ten times every second, so need to be able to integrate odor information arriving in short intervals or they will miss valuable odor information. OMP speeds up the transduction process so that more signals can contribute to generating action potentials,” said Reisert.

Other experiments with the knockout mice revealed that OMP also contributes to the ORNs’ ability to identify differences in odor concentration.

Together, the findings demonstrate that OMP plays a central role in regulating several aspects of ORN function.

“Understanding how OMP and the ORs dictate ORN responses will help drive the direction of future studies to understand how ORNs contribute to our ability to experience and respond to our olfactory world,” said Monell neuroscientist Michele Dibattista, PhD, the paper’s lead author.

Research reported in the publication was supported by grants from the National Institute on Deafness and Other Communication Disorders (DC009613, G20OD020296, and 1P30DC011735-01). The content is solely the responsibility of the authors and does not necessarily represent the official views of the National Institutes of Health. Dibattista currently is at the University of Bari in Bari, Italy.