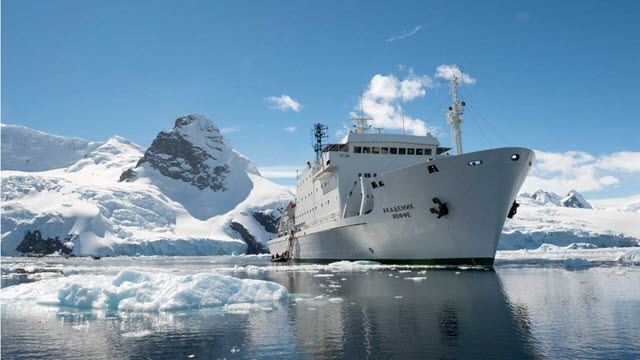 This summer, a team of scientists and students, conducting research aboard One Ocean Expeditions' vessel Akademik Ioffe, will offer select museums, as well as classrooms and citizen scientists worldwide, an opportunity to explore with them in real time a dramatically changing Arctic Ocean, and to discuss their research in the first-ever live, interactive broadcasts from the fabled Northwest Passage.

From August 23 to Sept. 13, the University of Rhode Island's Inner Space Center (ISC), with major funding from the U.S. National Science Foundation and additional support from the Heising-Simons Foundation, will conduct the innovative Northwest Passage Project research expedition with a team of natural and social scientists, students, and a professional film crew. This ground-breaking opportunity is also supported by One Ocean Expeditions as a key marine partner, having operated in Arctic waters for over 20 years.

Aboard the Akademik Ioffe, the team will collect water, ice, and air samples to advance understanding of and document the effect climate change is having on the environment and biodiversity in the Canadian Arctic Archipelago.

The project will help fill significant gaps in critical scientific data about the region, using of a suite of oceanographic instruments throughout the ship's 22-day transit.

The expedition's chief scientist, Dr. Brice Loose of the University of Rhode Island Graduate School of Oceanography, is coordinating and leading the research into the exchange of greenhouse gases between the water and atmosphere, and changes in distribution and abundance of two vulnerable levels of the Arctic food web—plankton and seabirds.

The project's four scientific research areas are further detailed in an appendix below.

Plans include deployment of the Slocum Glider, an autonomous underwater vehicle (AUV), to be retrieved after sampling the waters of eastern Lancaster Sound—a critical choke point in the Northwest Passage between the Beaufort Sea and Baffin Bay.

Freshwater export from the Arctic can have dramatic impacts on ocean circulation inside the Canadian Arctic Archipelago, as well as globally when it discharges into the North Atlantic Ocean.

Led by Donglai Gong of the Virginia Institute of Marine Science, the AUV team will be the first to fly an underwater glider collecting water column information inside the Northwest Passage.

The glider will be deployed for more than 10 days and will focus on water column measurement of temperature, salinity, dissolved oxygen, chlorophyll-a fluorescence, colored-dissolved organic matter fluorescence, and optical backscattering (the reflection of waves, particles, or signals back to the direction from which they came). This suite of measurements will provide a high resolution view of the Lancaster Sound currents, water masses, and primary biology.

The project will also contribute to understanding of the maritime history of the Northwest Passage, the role of the Inuit people in Arctic history, the effects of climate change on indigenous populations, and the geopolitics of a waterway confronted with threats from resource extraction, increased shipping commerce, and pollution.

Engaging students and the public

A group of 22 undergraduates, graduate students, and post-doctoral researchers from the U.S. and Canada will join the scientists. In addition, six teams of high school teachers and students (total 18) will be in residence in the ISC's mission control facility during the first week of the expedition and interact directly with the participants at sea.

The expedition team will engage a wide public audience through an extensive and unprecedented Internet presence from the area, including Facebook Live broadcasts from sea. Special interactive broadcasts will be beamed via the Inner Space Center (ISC), the U.S. facility that supports ocean exploration and education, to three prestigious science museums across the country - the Smithsonian National Museum of Natural History, Washington DC, the Exploratorium, San Francisco CA, and the Alaska SeaLife Center, Seward AK.

Information and details on the project's other general public events via Facebook Live and daily highlight videos will be available at http://www.northwestpassageproject.org

A two-hour, ultra-high 4K definition television documentary by the onboard film company David Clark, Inc. will air in 2019.

"It is important for people everywhere on Earth to understand how this region affects all citizens. The region's meltwater, water circulation, and flux of greenhouse gases between the ocean and the atmosphere are impacting wide-scale environmental and climatic changes, including how these changes affect people and wildlife diversity," says NPP principal investigator and project director Gail Scowcroft.

"The project's natural and social scientists will engage a group of university students in hands-on research, as the team addresses important research questions. In addition, diverse audiences will be reached through real-time interactions from sea, a two-hour documentary, and related events. The NPP will provide a visually stunning and historically poignant platform from which diverse audiences will experience this innovative expedition."

The project will take place onboard Akademik Ioffe with One Ocean Expeditions, a world leading expedition cruise operator whose core mandates include ocean health, science, and education as part of it's educational programming, while offering immersive experiences for passengers.

The 364-foot Akademik Ioffe is equipped with multiple laboratories, cranes, a "moon pool" shaft through the hull for lowering and raising equipment, and a full suite of oceanographic research tools.

The ship will depart Resolute Bay on August 23, travel south and west to Cambridge Bay via Bellot Strait, then return to Lancaster Sound and Pond Inlet, before travelling down the east side of Baffin Island, with many stops along the way. The expedition will end in Iqaluit on September 13, 2018.

On the 22-day journey, students will participate in hands-on research with onboard scientists, and make shore visits, including to wildlife and research sites.

There is uncertainty about the magnitude of the flow of water through the various restricted outlets from the Arctic to the Atlantic. One of the pathways for this freshwater transport can be found in the Northwest Passage, where the Northwest Passage Project expedition will take place.

The Arctic Ocean generally absorbs carbon dioxide, but ice cover limits air-sea exchange. Measuring carbon dioxide and its isotopic composition can provide information about the carbon system's sources and fluxes into the atmosphere.

Methane, a more potent greenhouse gas than carbon dioxide, is found throughout the Arctic Circle, and the Arctic appears to be an ever growing source of methane to the atmosphere. Methane is found in land-based permafrost and as methane ice or methane hydrates, which are distributed along the seafloor.

With less sea ice cover, there can be an increased flux of methane into the atmosphere from the ocean. However, some microbes in ocean water use methane as a food source. If microbial breakdown of methane is rapid enough, it may serve to offset the methane that escapes to the atmosphere. There is little data to provide estimates of this methane breakdown in Arctic water. The Northwest Passage Project will study this microbial breakdown of methane and the rate at which it occurs in the Northwest Passage region.

Ecosystem surveys of Arctic habitats in transition: Distribution and abundance of zooplankton and phytoplankton

As the waters of the Arctic warm and the sea ice cover decreases, the Arctic surface ocean ecosystem is anticipated to undergo considerable changes. Habitats are changing and moving, perhaps disappearing, and species distribution and abundance also may be changing rapidly.

To observe phytoplankton and zooplankton, the Northwest Passage Project will periodically conduct plankton net tows in the upper water column (100m and less). The contents of the nets will be catalogued. The organisms collected in these net tows will be counted with a laboratory bench-top Flowcam.

The Flowcam counts and images micrometer size particles using an imaging microscope. This provides the ability to identify and quantify 'particles' from some sampled volume. These particles can be sediments, phytoplankton, or even zooplankton. This imaging system will generate a library of images for each run and store them for processing later.

Ecosystem surveys of Arctic habitats in transition: Distribution and abundance of seabirds

In addition to the water column studies, there will be surveys of marine birds for the duration of the expedition. As top predators of marine food webs, seabirds play an important role in marine ecosystems. Colonies of international importance are found in this region and their abundance and distribution at sea can be used to monitor changes and variability. The Northwest Passage Project cruise will use a standard method to perform seabird counts and contribute to the seabird survey database of the Canadian Wildlife Service used to monitor the status of marine birds in Canada.

Live interactive broadcasts throughout the expedition will use the ISC's advanced telepresence technology and video production facility. Pre-expedition webinars, archived online for public viewing, will prepare the students for their research experiences.

The ISC will also produce daily video blasts using footage supplied by the onboard filmmakers. These video blasts will be used during broadcasts and live interactions with partner sites. They will also be available on the ISC's YouTube channel.

The ISC will receive a live satellite link from the ship and connect it to the partner sites, allowing audiences to communicate with the shipboard scientists and students. The pre-produced video segments will be made available to the partner institutions for use in their other educational activities, and will also be made available on the project website.

Since the Arctic is an extreme environment and at any time during the expedition may experience weather that disrupts the satellite signal, these highlight videos will allow the ISC to conduct an interactive program with the partner institutions without the live interaction from sea, if necessary.