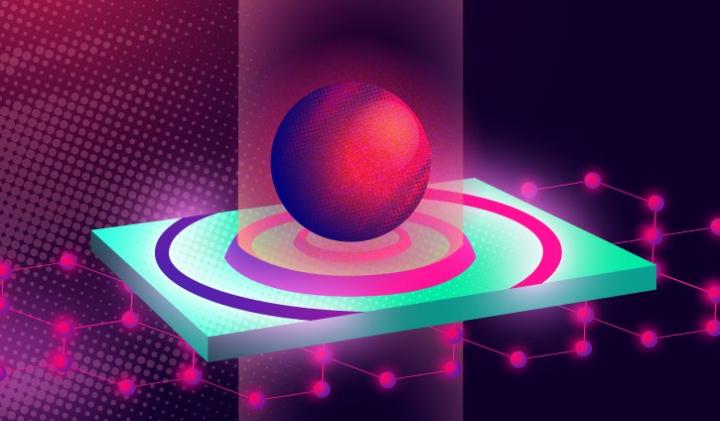 Physicists from the Moscow Institute of Physics and Technology (MIPT) and Vladimir State University, Russia, have achieved a nearly 90 percent efficiency converting light energy into surface waves on graphene. They relied on a laser-like energy conversion scheme and collective resonances. The paper was recently published in Laser & Photonics Reviews.

Manipulating light at the nanoscale is a task crucial for being able to create ultracompact devices for optical energy conversion and storage. To localize light on such a small scale, researchers convert optical radiation into so-called surface plasmon-polaritons. These SPPs are oscillations propagating along the interface between two materials with drastically different refractive indices—specifically, a metal and a dielectric or air. Depending on the materials chosen, the degree of surface wave localization varies. It is the strongest for light localized on a material only one atomic layer thick, because such 2D materials have high refractive indices.

The existing schemes for converting light to SPPs on 2D surfaces have an efficiency of no more than 10 percent. It is possible to improve that figure by using intermediary signal converters—nano-objects of various chemical compositions and geometries.

The intermediary converters used in the recent study in Laser & Photonics Reviews are semiconductor quantum dots with a size of five to 100 nanometers and a composition similar to that of the solid semiconductor they are manufactured from. That said, the optical properties of a quantum dot vary considerably with its size. So by changing its dimensions, researchers can tune it to the optical wavelength of interest. If an assembly of variously sized quantum dots is illuminated with natural light, each dot will respond to a particular wavelength.

Quantum dots come in various shapes—cylinders, pyramids, spheres, etc.—and chemical compositions. In its study, the team of Russian researchers used ellipsoid-shaped quantum dots 40 nanometers in diameter. The dots served as scatterers positioned above the surface of graphene, which was illuminated with infrared light at a wavelength of 1.55 micrometers. A dielectric buffer several nanometers thick separated the graphene sheet from the quantum dots (Figure 1).

The idea to use a quantum dot as a scatterer is not new. Some of the previous graphene studies used a similar arrangement, with the dots positioned above the 2D sheet and interacting both with light and with surface electromagnetic waves at a common wavelength shared by the two processes. This was made possible by choosing a quantum dot size that was exactly right. While such a system is fairly easy to tune to a resonance, it is susceptible to luminescence quenching—the conversion of incident light energy into heat—as well as reverse light scattering. As a result, the efficiency of SPP generation did not exceed 10 percent.

"We investigated a scheme where a quantum dot positioned above graphene interacts both with incident light and with the surface electromagnetic wave, but the frequencies of these two interactions are different. The dot interacts with light at a wavelength of 1.55 micrometers and with the surface plasmon-polariton at 3.5 micrometers. This is enabled by a hybrid interaction scheme," comments study co-author Alexei Prokhorov, a senior researcher at the MIPT Center for Photonics and 2D Materials, and an associate professor at Vladimir State University.

The essence of the hybrid interaction scheme is that rather than using just two energy levels—the upper and lower ones—the setup also includes an intermediate level. That is, the team used an energetic structure akin to that of the laser. The intermediate energy level serves to enable the strong connection between the quantum dot and the surface electromagnetic wave. The quantum dot undergoes excitation at the wavelength of the laser illuminating it, whereas surface waves are generated at the wavelength determined by the SPP-quantum dot resonance.

"We have worked with a range of materials for manufacturing quantum dots, as well as with various types of graphene," Prokhorov explained. "Apart from pure graphene, there is also what's called doped graphene, which incorporates elements from the neighboring groups in the periodic table. Depending on the kind of doping, the chemical potential of graphene varies. We optimized the parameters of the quantum dot—its chemistry, geometry—as well as the type of graphene, so as to maximize the efficiency of light energy conversion into surface plasmon-polaritons. Eventually we settled on doped graphene and indium antimonide as the quantum dot material."

Despite the highly efficient energy input into graphene via the quantum dot intermediary, the intensity of the resulting waves is extremely low. Therefore, large numbers of dots have to be used in a specific arrangement above the graphene layer. The researchers had to find precisely the right geometry, the perfect distance between the dots to ensure signal amplification due to the phasing of the near fields of each dot. In their study, the team reports discovering such a geometry and measuring a signal in graphene that was orders of magnitude more powerful than for randomly arranged quantum dots. For their subsequent calculations, the physicists employed self-developed software modules.

The calculated conversion efficiency of the newly proposed scheme is as high as 90 to 95 percent. Even accounting for all the potential negative factors that might affect this figure of merit, it will remain above 50 percent—several times higher than any other competing system.

"A large part of such research focuses on creating ultracompact devices that would be capable of converting light energy into surface plasmon-polaritons with a high efficiency and on a very small scale in space, thereby recording light energy into some structure," said the director of the MIPT Center for Photonics and 2D Materials, Valentyn Volkov, who co-authored the study. "Moreover, you can accumulate polaritons, potentially designing an ultrathin battery composed of several atomic layers. It is possible to use the effect in light energy converters similar to solar cells, but with a several times higher efficiency. Another promising application has to do with nano- and bio-object detection."