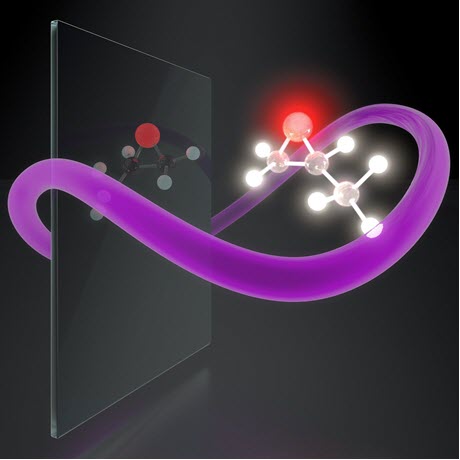 Synthetic chiral light selectively interacts with one of the two versions of a chiral molecule (left or right). The selected version responds by emitting very bright light, while its "mirror twin" remains dark.Credit: Steven RobertsLight is the fastest way to distinguish right- and left-handed chiral molecules, which has important applications in chemistry and biology. However, ordinary light only weakly senses molecular handedness. Researchers from the Max Born Institute for Nonlinear Optics and Short Pulse Spectroscopy (MBI), the Israel Institute of Technology (Technion) and Technische Universitaet Berlin (TU Berlin) have now shown how to generate and characterize an entirely new type of light, synthetic chiral light, which identifies molecules' handedness exceptionally distinctly. The results of their joint work have just appeared in Nature Photonics.

Like our left and right hands, some molecules in nature also have mirror twins. However, while these twin molecules may look similar, some of their properties can be very different. For instance, the handedness—or chirality—of molecules plays an essential role in chemistry, biology, and drug development: while one type of a molecule can cure a disease, its mirror twin—or enantiomer—may be toxic or even lethal.

It is extremely hard to tell opposite chiral molecules apart because they look identical and behave identically, unless they interact with another chiral object. Light has long been the perfect candidate: oscillations of the electromagnetic field draw a chiral helix in space, along the light propagation direction. Depending on whether the helix twirls clockwise or counterclockwise, the light wave is either right- or left-handed. Chiral molecules can interact differently with it. However, the helix pitch, set by the light wavelength, is about a thousand times bigger than the size of a molecule. So, the tiny molecules perceive the light helix rather as a gigantic circle, hardly feeling its chirality at all.

An innovative way around this problem, proposed by MBI, Technion, and TU Berlin scientists, is to synthesize a wholly new type of chiral light—one that draws a chiral structure in time, at every single point in space. "The handedness of this new light can be tuned in such a way that one enantiomer will actively interact with it and emit bright light in response, while the opposite enantiomer will not interact with it at all," explains Dr. David Ayuso, MBI researcher and the first author of the article.

The scientists described this new chiral light mathematically and tested their model by simulating how it interacts with chiral molecules. Furthermore, they showed how to "cook" such light in a lab: fusing two converging laser beams that carry light waves of two different frequencies. By tuning the phase shift between the different frequencies, scientists can control the handedness of this synthetic chiral light and thus select with which type of molecules it will strongly interact.

The researchers foresee a variety of potential applications of the new method in chemistry and biology. For example, synthetic chiral light could allow one to monitor chiral chemical reactions in real-time or detect the switch in the molecules' handedness. "We also hope to utilize this new approach to spatially separate molecules with the opposite handedness using ultrafast lasers," concludes Dr. Olga Smirnova, professor at the TU Berlin and head of an MBI Theory group.