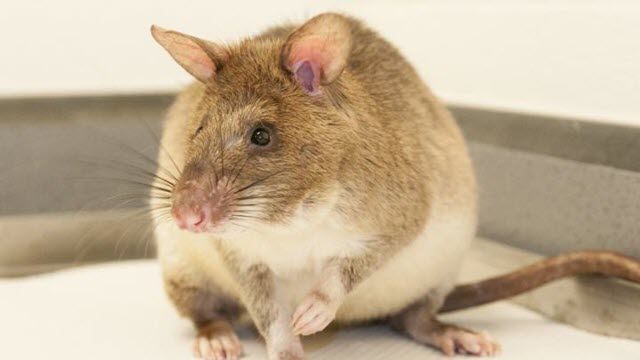 This is an adult African giant pouched ratCREDIT: Aubrey Kelly

Thousands of people—many of them children—are hurt or killed by land mines each year, so finding these devices before they explode is critical.

There is a surprising champion of detection: the African giant pouched rat. Native to sub-Saharan Africa, the pouched rats are large—they can grow up to three feet long, including the tail—but are still too small to set off the land mines. They have an exceptional sense of smell—they are also used to detect tuberculosis—but scientists know very little about their biology or social structure, and they’re difficult to breed in captivity.

“We wanted to understand their reproductive behaviors and olfactory capabilities, because they have been so important in humanitarian work,” said Alex Ophir, assistant professor of psychology in the College of Arts and Sciences.

Cornell researchers have found that the pouched rats’ reproductive system is unlike any other species. They report their findings in a study, “Anogenital Distance Predicts Sexual Odour Preference in African Giant Pouched Rats,” published Jan. 17 in Animal Behaviour; co-authors were Ophir, postdoctoral researcher Angela Freeman, and Michael Sheehan, assistant professor of neurobiology and behavior.

For male rats searching for a mate, identifying which adult females are reproductively available, or patent, is critical. Female pouched rats have extremely delayed sexual development. When the researchers looked at whether male pouched rats have a preference for the scent of females who are patent, they found something unexpected.

This is the first time it’s been shown that longer AGD is associated with more efficient communication and signal processing, according to Freeman, first author of the paper.

“While all males are presumably able to receive the same information from a female via her urine,” Freeman said, “males who had this androgen exposure in early life have an altered way of using that information that gives them a competitive advantage in finding potential mating partners.”

Ophir noted that being able to distinguish viable from non-viable partners in a split second has long-term repercussions for reproductive success among the species.

“It is amazing to think that in utero experiences can lock in the ability of these males to detect differences in female reproductive availability,” Ophir said. “Our results raise interesting evolutionary questions, like how does natural selection operate on characteristics that are largely determined by chance features of the uterine environment?”

In other rodent species, patency is dictated by the estrous cycle. But that does not seem to be the case with pouched rats: When one of the only two females with a reliable estrous cycle in the Cornell pouched rat colony died, the researchers discovered that every one of the non-patent females suddenly developed patency, and many of them also showed evidence of the sudden onset of reproductive cycling.

Many rodent species have dominant females that are able to turn off the estrous cycles of other females through pheromonal communication, though none has achieved this with such extreme measures.

“This kind of patency change is different from basically every other rodent that’s been studied up until this point,” said Freeman. “Further studies to understand this process will help explain why breeding pouched rats is so difficult in captivity.”