Scientists at Nanyang Technological University, Singapore (NTU Singapore) have found a way to turn pollen, one of the hardest materials in the plant kingdom, into a soft and flexible material, with the potential to serve as 'building blocks' for the design of new categories of eco-friendly materials.

The findings, published in Nature Communications Mar. 19, show how they used a simple chemical process akin to conventional soap-making to turn pollen grains from sunflowers and other types of plants into soft microgel particles that respond to various stimuli.

They suggest that, coupled with advances in 3D and 4D printing, the resulting pollen-based particles might one day be turned into a range of different forms including polymer gels, sheets of 'paper' and sponges. 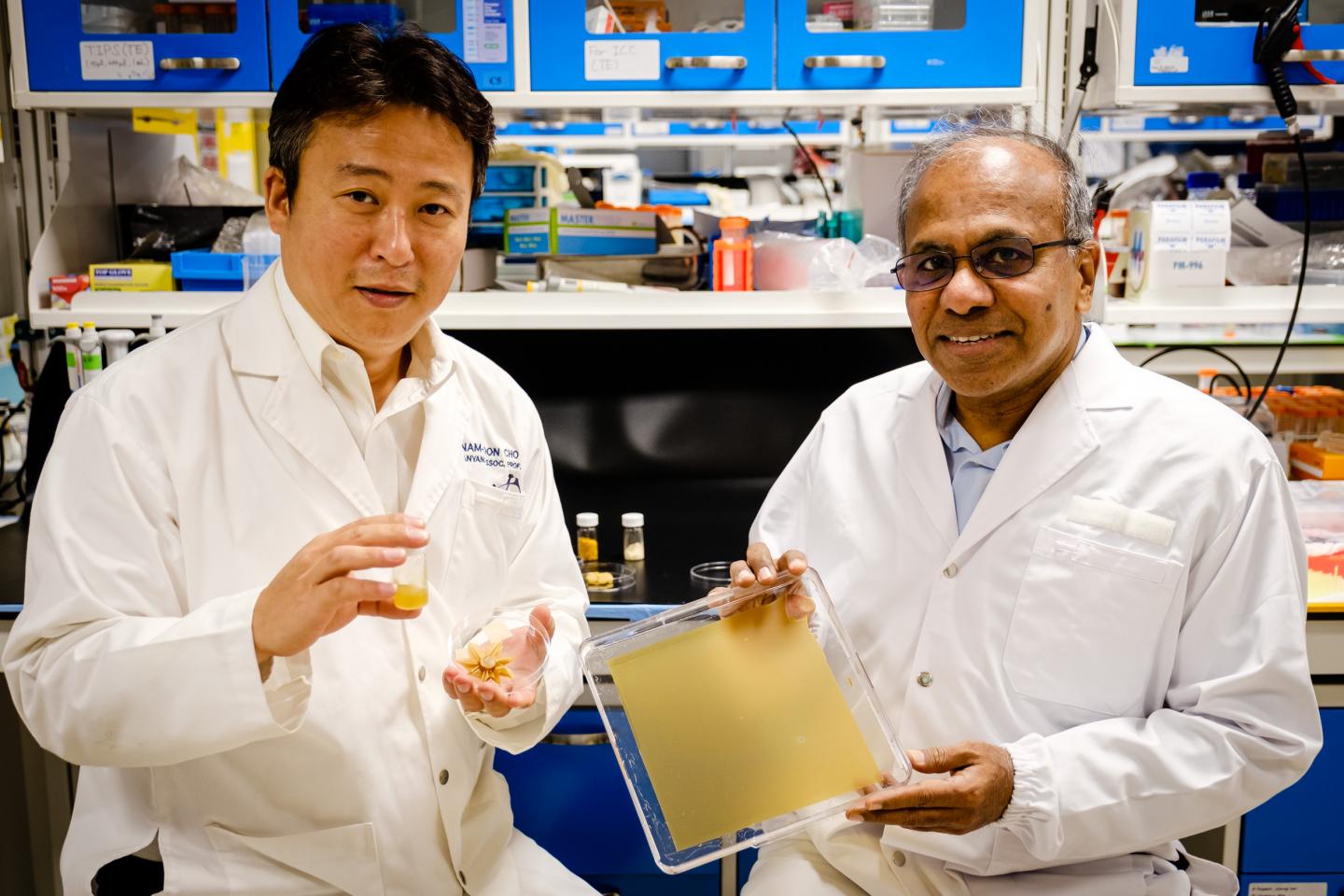 NTU Singapore scientists have found a way to turn pollen, one of the hardest materials in the plant kingdom, into a soft, flexible material. Pictured: NTU distinguished university professor Subra Suresh, who is also NTU president (right) and professor Cho Nam-Joon, both co-authors of the paper.
NTU Singapore

NTU Distinguished University Professor Subra Suresh, who is also the NTU president, said: "Our NTU research team has transformed hard pollen grains beyond their natural performance limits, and converted them into soft microgel particles that alter their properties in response to external stimuli. This holds promise for a wide range of applications that are environmentally sustainable, economically affordable, and practically scalable."

The results to date also suggest that the pollen-based microgel particles' biocompatibility—meaning it does not cause an immunological, allergic or toxic reaction when exposed to body tissues—also makes it potentially suitable for applications such as wound dressing, prosthetics, and implantable electronics.

Nam-Joon, who holds the Materials Research Society of Singapore Chair in Materials Science and Engineering, said: "Both our experimental and computational results give insight into the pollen's basic biological mechanisms, and demonstrate how altering the pollen wall structure can cause the pollen particles to swell—much like the shape transformations that occur during biological processes such as harmomegathy (the folding of the pollen grain to prevent water loss) and germination. The results also show that we can go beyond the performance limits of what nature can accomplish by itself." 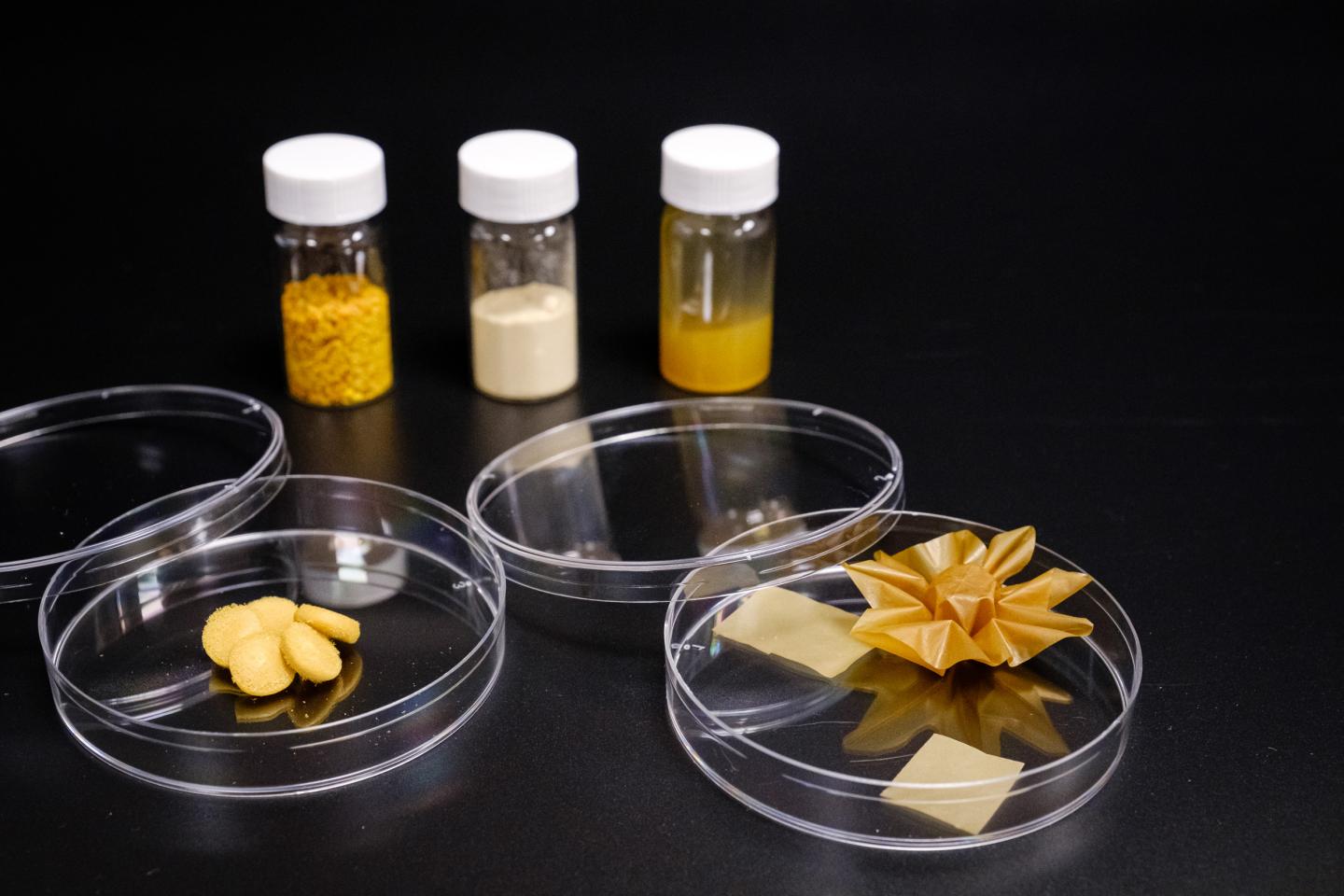 Insert Image Here (remove this text once you've added an image)
This pollen-derived material has the potential to serve as a "building block" for the design of new categories of eco-friendly materials. Pictured in the foreground: sponges and paper derived from pollen.
NTU Singapore

Pollen, described by scientists as the diamond of the plant world for its indestructible traits, encapsulates and transports a plant's male genetic material within a wall structure composed of two mechanically distinct layers—a tough outer layer (exine), and a soft and elastic cellulose inner layer (intine).

When released from a flower's male reproductive part, pollen grains become dehydrated and individual grains fold onto themselves. Conversely, when these grains arrive on the plant's female reproductive structure, they become hydrated and germinate, with a pollen tube growing out of the grain and towards the female part.

Pollen grains from the sunflower plant, with their sticky oil-based 'pollen cement' layer removed, were incubated under alkaline conditions for up to 12 hours. This softened the two parts of the pollen wall, and the pollen grain particles swelled and became more gel-like. The longer the grains were incubated, the more gel-like the resulting material became.

In computer simulations, the team also found that the elastic properties of the outer and inner wall layers need to fall within a precise range for the pollen-derived material to exhibit this gel-like behavior, suggesting that for an individual pollen particle, there is a chemical and physical pathway that determines whether hydration leads to its successful germination.

Juha said: "Our study inspires future investigation into understanding how the materials science of pollen might influence plant reproductive success."

- This press release was originally published on the Nanyang Technological University, Singapore website