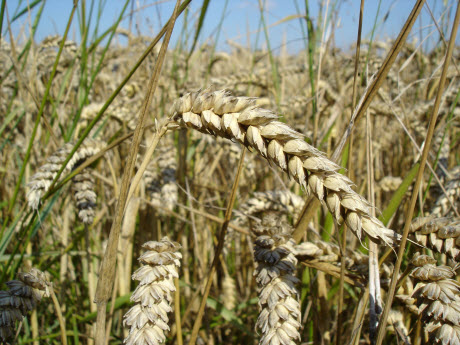 In the study, researchers used a flow sorter to dissect a single chromosome from the larger genome in a wild wheat relative.Photo credit: Bluemoose, Wikimedia CommonsMANHATTAN — Kansas State University wheat scientists have completed the first study of a chromosome in a tertiary gene pool and have called it a breakthrough in exploring wheat wild relatives for future crop improvement.

Their study, "Exploring the tertiary gene pool of bread wheat: sequence assembly and analysis of chromosome 5M of Aegilops geniculata," was published Sept. 27 in The Plant Journal.

"What we did is develop a strategy that can be used as a model to explore genomic resources for gene mining from distant wild relatives of wheat," said Vijay Tiwari, research associate in the plant pathology department and the study's lead author.

A tertiary gene pool in wheat refers to distant relatives of current varieties. Tiwari said having a complete understanding of the tertiary gene makeup helps wheat breeders develop new varieties that are resistant to disease and more tolerant of heat and drought.

"Basically we've worked a lot on the primary gene pool of wheat and we have expanded our primary gene pool a lot," Tiwari said. "But we are limited on what we can do because of a lack of genomic resources for distant wild relatives."

In the study, researchers used a flow sorter to dissect a single chromosome from the larger genome in a wild wheat relative. Tiwari said the scientists then studied the gene composition and developed genomic resources and markers in the wild relative for gene mining and transfer to wheat.

"It's interesting to see how similar wild relatives are to wheat in terms of gene content and gene composition," Tiwari said.

The chromosome they studied — known as 5M from a wheat progenitor Aegilops geniculate — has many important agronomic genes, Tiwari said. Three in particular will be useful in helping to breed for resistance to wheat rust, a pathogen that has devastated wheat since Roman times.