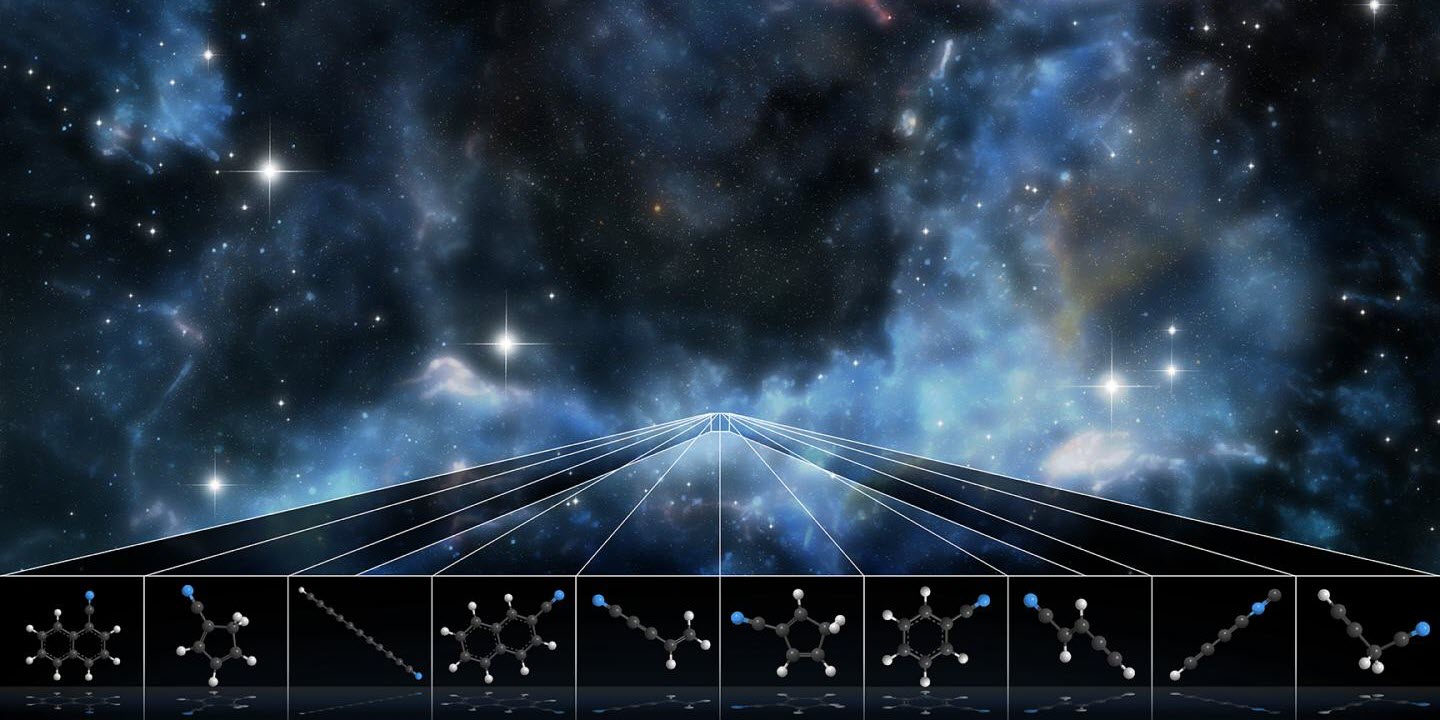 In a series of nine papers, scientists from the GOTHAM—Green Bank Telescope Observations of TMC-1: Hunting Aromatic Molecules—project described the detection of more than a dozen polycyclic aromatic hydrocarbons in the Taurus Molecular Cloud, or TMC-1. These complex molecules, never before detected in the interstellar medium, are allowing scientists to better understand the formation of stars, planets, and other bodies in space. In this artist's conception, some of the detected molecules include, from left to right: 1-cyanonaphthalene, 1-cyano-cyclopentadiene, HC11N, 2-cyanonaphthalene, vinylcyanoacetylene, 2-cyano-cyclopentadiene, benzonitrile, trans-(E)-cyanovinylacetylene, HC4NC, and propargylcyanide, among others.
M. Weiss / Center for Astrophysics | Harvard & Smithsonian

CAMBRIDGE, MA  — March 18, 2021 — Scientists have discovered a vast, previously unknown reservoir of new aromatic material in a cold, dark molecular cloud by detecting individual polycyclic aromatic hydrocarbon molecules in the interstellar medium for the first time, and in doing so are beginning to answer a three-decades-old scientific mystery: how and where are these molecules formed in space?

"We had always thought polycyclic aromatic hydrocarbons were primarily formed in the atmospheres of dying stars," said Brett McGuire, assistant professor of chemistry at the Massachusetts Institute of Technology, and the project principal investigator for GOTHAM, or Green Bank Telescope (GBT) Observations of TMC-1: Hunting Aromatic Molecules. "In this study, we found them in cold, dark clouds where stars haven't even started forming yet."

Aromatic molecules, and PAHs—shorthand for polycyclic aromatic hydrocarbons—are well known to scientists. Aromatic molecules exist in the chemical makeup of human beings and other animals, and are found in food and medicines. As well, PAHs are pollutants formed from the burning of many fossil fuels and are even amongst the carcinogens formed when vegetables and meat are charred at high temperatures. "Polycyclic aromatic hydrocarbons are thought to contain as much as 25-percent of the carbon in the universe," said McGuire, who is also a research associate at the Center for Astrophysics | Harvard & Smithsonian (CfA). "Now, for the first time, we have a direct window into their chemistry that will let us study in detail how this massive reservoir of carbon reacts and evolves through the process of forming stars and planets."

Scientists have suspected the presence of PAHs in space since the 1980s but the new research, detailed in nine papers published over the past seven months, provides the first definitive proof of their existence in molecular clouds. To search out the elusive molecules, the team focused the 100m behemoth radio astronomy GBT on the Taurus Molecular Cloud, or TMC-1—a large, pre-stellar cloud of dust and gas located roughly 450 light-years from Earth that will someday collapse in on itself to form stars—and what they found was astonishing: not only were the accepted scientific models incorrect, but there was a lot more going on in TMC-1 than the team could have imagined.

"From decades of previous modeling, we believed that we had a fairly good understanding of the chemistry of molecular clouds," said Michael McCarthy, an astrochemist and acting deputy director of CfA, whose research group made the precise laboratory measurements that enabled many of these astronomical detections to be established with confidence. "What these new astronomical observations show is these molecules are not only present in molecular clouds, but at quantities which are orders of magnitude higher than standard models predict."

McGuire added that previous studies revealed only that there were PAH molecules out there, but not which specific ones. "For the last 30 years or so, scientists have been observing the bulk signature of these molecules in our galaxy and other galaxies in the infrared, but we couldn't see which individual molecules made up that mass. With the addition of radio astronomy, instead of seeing this large mass that we can't distinguish, we're seeing individual molecules."

Much to their surprise, the team didn't discover just one new molecule hiding out in TMC-1. Detailed in multiple papers, the team observed 1-cyanonaphthalene, 1-cyano-cyclopentadiene, HC11N, 2-cyanonaphthalene, vinylcyanoacetylene, 2-cyano-cyclopentadiene, benzonitrile, trans-(E)-cyanovinylacetylene, HC4NC, and propargylcyanide, among others. "It's like going into a boutique shop and just browsing the inventory on the front-end without ever knowing there was a back room. We've been collecting little molecules for 50 years or so and now we have discovered there's a back door. When we opened that door and looked in, we found this giant warehouse of molecules and chemistry that we did not expect," said McGuire. "There it was, all the time, lurking just beyond where we had looked before."

McGuire and other scientists at the GOTHAM project have been "hunting" for molecules in TMC-1 for more than two years, following McGuire's initial detection of benzonitrile in 2018. The results of the project's latest observations may have ramifications in astrophysics for years to come. "We've stumbled onto a whole new set of molecules unlike anything we've previously been able to detect, and that is going to completely change our understanding of how these molecules interact with each other. It has downstream ramifications," said McGuire, adding that eventually these molecules grow large enough that they begin to aggregate into the seeds of interstellar dust. "When these molecules get big enough that they're the seeds of interstellar dust, these have the possibility then to affect the composition of asteroids, comets, and planets, the surfaces on which ices form, and perhaps in turn even the locations where planets form within star systems."

The discovery of new molecules in TMC-1 also has implications for astrochemistry, and while the team doesn't yet have all of the answers, the ramifications here, too, will last for decades. "We've gone from one-dimensional carbon chemistry, which is very easy to detect, to real organic chemistry in space in the sense that the newly discovered molecules are ones that a chemist knows and recognizes, and can produce on Earth," said McCarthy. "And this is just the tip of the iceberg. Whether these organic molecules were synthesized there or transported there, they exist, and that knowledge alone is a fundamental advance in the field."

Before the launch of GOTHAM in 2018, scientists had cataloged roughly 200 individual molecules in the Milky Way's interstellar medium. These new discoveries have prompted the team to wonder, and rightly so, what's out there. "The amazing thing about these observations, about this discovery, and about these molecules, is that no one had looked, or looked hard enough," said McCarthy. "It makes you wonder what else is out there that we just haven't looked for."

This new aromatic chemistry that scientists are finding isn't isolated to TMC-1. A companion survey to GOTHAM, known as ARKHAM—A Rigorous K/Ka-Band Survey Hunting for Aromatic Molecules—recently found benzonitrile in multiple additional objects. "Incredibly, we found benzonitrile in every single one of the first four objects observed by ARKHAM," said Andrew Burkhardt, a Submillimeter Array postdoctoral fellow at the CfA and a co-principal investigator for GOTHAM. "This is important because while GOTHAM is pushing the limit of what chemistry we thought is possible in space, these discoveries imply that the things we learn in TMC-1 about aromatic molecules could be applied broadly to dark clouds anywhere. These dark clouds are the initial birthplaces of stars and planets. So, these previously invisible aromatic molecules will also need to be thought about at each later step along the way to the creation of stars, planets, and solar systems like our own."

"Aromatics and Cyclic Molecules in Molecular Clouds: A New Dimension of Interstellar Organic Chemistry," McCarthy & McGuire 2021, The Journal of Physical Chemistry A [https://dx.doi.org/10.1021/acs.jpca.1c00129]

- This press release was originally published on the Harvard-Smithsonian Center for Astrophysics website. It has been edited for style