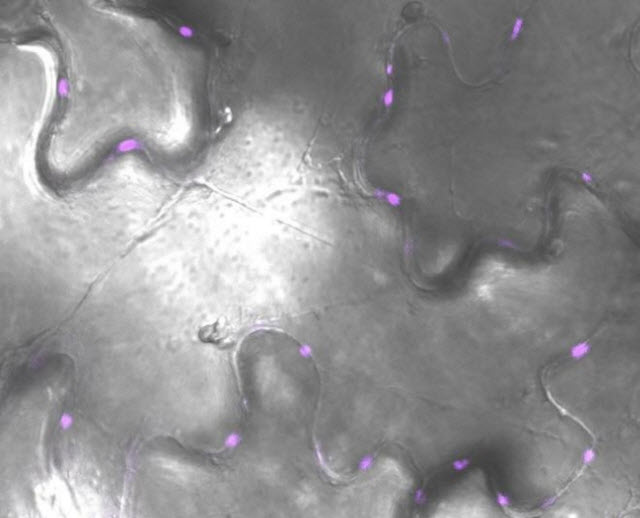 These are plasmodesmal channels on a leaf of the Arabidopsis plant, a member of the cabbage family. Fluorescence imaging shows callose deposits, which close off the channel when cut.Image Courtesy of: University of Delaware

University of Delaware researchers have identified two novel molecular players necessary to regulate plasmodesmata—communication channels in plants that bridge individual cells with their neighboring cells for distribution and exchange of nutrients, minerals and cellular signals—under both biotic and abiotic stress conditions, shining light on what is considered one of the mysteries of plant biology and a fundamental structure essential for plant survival and body formation.

"Plants do not have cells that move freely like humans do because plant cells are kind of glued together. So they have to have a different way to communicate and that's these channels," said Weier Cui, a postdoctoral researcher in the College of Agriculture and Natural Resources' Department of Plant and Soil Sciences who used the study for her Ph.D. thesis.

The research, published recently in the journal Nature Plants, was conducted by Cui and Jung-Youn Lee, professor of plant and soil sciences and biological sciences. The work was funded by the National Science Foundation (NSF) and the National Institutes of Health (NIH).

The paper is the result of three years of research and Lee said that without Cui's level of commitment, hard work and perseverance, they never would have been able to get their results. Lee also said that it is very rare for a paper of this magnitude to have only two authors.

According to Lee, not much is known about plasmodesmata due to the technical challenges associated with its study.

"Our lab has been studying how plant cells regulate plasmodesmal gating to either facilitate or block intercellular movement in response to environmental challenges. Our previous finding made the connection for the first time that plasmodesmata are closed when plants are attacked by microbial pathogens as an innate immune response," said Lee. "It is almost as if plants are guarding the intercellular passageways limiting food supply or distribution, which would deter the invading pathogenic bacteria, for example, to proliferate."

This latest research shows that in addition to closing the pathways due to immune response, the pathways are also closed in response to mechanical wounding.

Through targeted mutant screening of Arabidopsis plants, Cui identified two genes encoding enzymes that catalyze the production of cell wall polymers called callose, which is not a structural constituent of the plant cell wall and functions as transitional wall materials formed at the cell division sites or wounding sites.

"Our job is to find molecules that may be the door keepers of the channels, sometimes restrict them and sometimes open them. Callose is one of the most important physical constraints of plasmodesmata," said Cui.

Lee said that callose has been found as a kind of structural element near the plasmodesmata channel and "people have seen that sometimes the level will go up and sometimes it will go down, and when it's less, it seems to correlate with when plasmodesmata permeability has increased. There were strong correlations."

Lee further explained that because the callose is a biopolymer—polymers produced by a living organism—it has to be synthesized by enzymes. "It has also been known that callose itself is synthesized by callose synthase enzymes, and there are gene families known, but no one knew which callose synthase member is specifically devoted to produce callose at the plasmodesmata."

This research shows that two enzymes are devoted to altering callose levels at the plasmodesmata, with one working particularly when the plant has been infected by a pathogen and one functioning specifically in situations where plants are stressed by an abiotic mechanism.

"If you wound the plant leaves, they deposit a large quantity of callose at the wounding site, which is controlled by one of the known callose synthase members. When plant tissues are damaged, the plant has to clot the wounded sites—that's the wound callose. At the same time, they also deposit a finite amount of callose at around the channels between intact cells nearby the damaged, dying cells. Here, different members of the enzyme, which we newly identified, seems to function to close channels because isolating the healthy cells is perhaps necessary to protect them," Cui said.

Now that the "molecular players" critical for changing plasmodesmata permeability have been identified, researchers can use the molecular and genetic information to find even more components of the plasmodesmata regulatory pathway or mechanism and will be able to link the significance or the functional importance of plasmodesmata in development, physiology and in interaction with its environment.

"Our finding really opens up many avenues in the whole field," Lee said. "The reason that plasmodesmata have remained a mystery of plant biology is because we have not known much about how they are formed or the molecules or the genes that are involved in the formation or regulation. These two genes that we identified are novel regulators of the plasmodesmal permeability, which allows us and others to use as new molecular tools for further exploration."