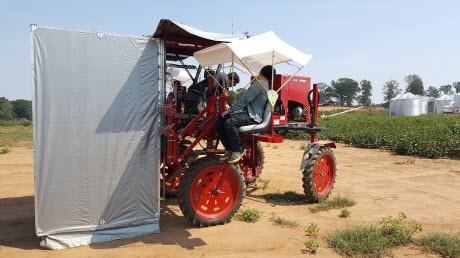 Members of the research team prepare to test multispectral, hyperspectral and thermal cameras that will record data on plant characteristics last summer at the Iron Horse Plant Sciences Farm. The tractor used for preliminary testing will be replaced by all-terrain robots and unmanned aerial vehicles, or drones, during the growing season this spring and summer.Photo Credit: Kyle JohnsenAthens, Ga. - It may be a while before robots and drones are as common as tractors and combine harvesters on farms, but the high-tech tools may soon play a major role in helping feed the world's rapidly growing population.

At the University of Georgia, a team of researchers is developing a robotic system of all-terrain rovers and unmanned aerial drones that can more quickly and accurately gather and analyze data on the physical characteristics of crops, including their growth patterns, stress tolerance, and general health. This information is vital for scientists who are working to increase agricultural production in a time of rapid population growth.

"By the middle of this century scientists estimate the world's population will reach 9.1 billion people, which is a 30 percent increase in a little more than 30 years," said Changying "Charlie" Li, a professor in UGA's College of Engineering and the principal investigator on the project. "This increase in population will demand that we nearly double our current food production. That's a tall order but one solution is to use genomic tools to develop high-quality, high-yield, adaptable plants."

While scientists can gather data on plant characteristics now, the process is expensive and painstakingly slow, as researchers must manually record data one plant at a time. But the team of robots developed by Li and his collaborators will one day allow researchers to compile data on entire fields of crops throughout the growing season.

The project addresses a major bottleneck that's holding up plant genetics research, said Andrew Paterson, a co-principal investigator. Paterson, a world leader in the mapping and sequencing of flowering-plant genomes, is a Regents Professor in UGA's College of Agricultural and Environmental Sciences and Franklin College of Arts and Sciences.

"The robots offer us not only the means to more efficiently do what we already do, but also the means to gain information that is presently beyond our reach," he said. "For example, by measuring plant height at weekly intervals instead of just once at the end of the season, we can learn about how different genotypes respond to specific environmental parameters, such as rainfall."

In addition to multispectral, hyperspectral, and thermal cameras, the robots will be outfitted with Light Detection and Ranging, or LiDAR, a remote sensing method that uses light in the form of a pulsed laser to measure distances. The technology will allow the researchers to create precise three-dimensional images of the plants they study.

During preliminary testing of the system last year at UGA's Iron Horse Plant Sciences Farm between Watkinsville and Greensboro, Li estimates the team collected 20 terabytes of data over the six-month growing season. He says the team will collect 30 times that amount when the robots are fully deployed.

To analyze these massive data sets, the researchers are developing an artificial intelligence algorithm similar to the facial recognition program Facebook uses to facilitate the identification and "tagging" of people in a photograph.

"As an example, our algorithm will be able to scan an aerial photo of a large field and automatically identify the location and number of flowers on each plant," said Li. 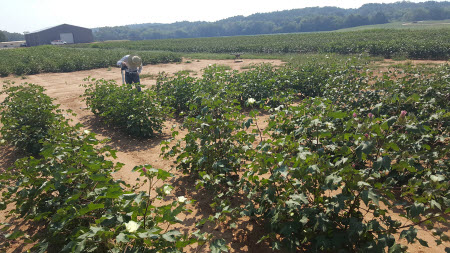 Changying "Charlie" Li, a professor in the UGA College of Engineering, calibrates a prototype all-terrain robot while a drone hovers nearby at the Iron Horse Plant Sciences Farm.Photo credit: Credit: Kyle JohnsenWith teams of autonomous vehicles rumbling through rows of crops and hovering overhead, algorithms will also play a key role in making sure the robots and drones perform their assigned tasks while staying out of each other's way. Javad Mohammadpour Velni, a co-principal investigator on the project and an assistant professor in the College of Engineering, is developing a suite of analytical tools that will allow the ground and aerial vehicles to operate independently but collaboratively to efficiently cover fields and collect different types of data.

The UGA researchers believe their work will provide a platform for plant geneticists to gather massive amounts of phenotype data and empower advances in crops that sustain the planet's population.

"Historically, genetics has been credited for about half of the yield gains that permitted small numbers of farmers and producers to sustain large human populations, for example during the Green Revolution," said Paterson. "It's realistic to envision that genetics will need to account for about half of the doubling of agricultural output that's needed by 2050.  This will require roughly doubling historical rates of progress in crop improvement, and more detailed and efficient phenotyping will be essential to accomplishing this."