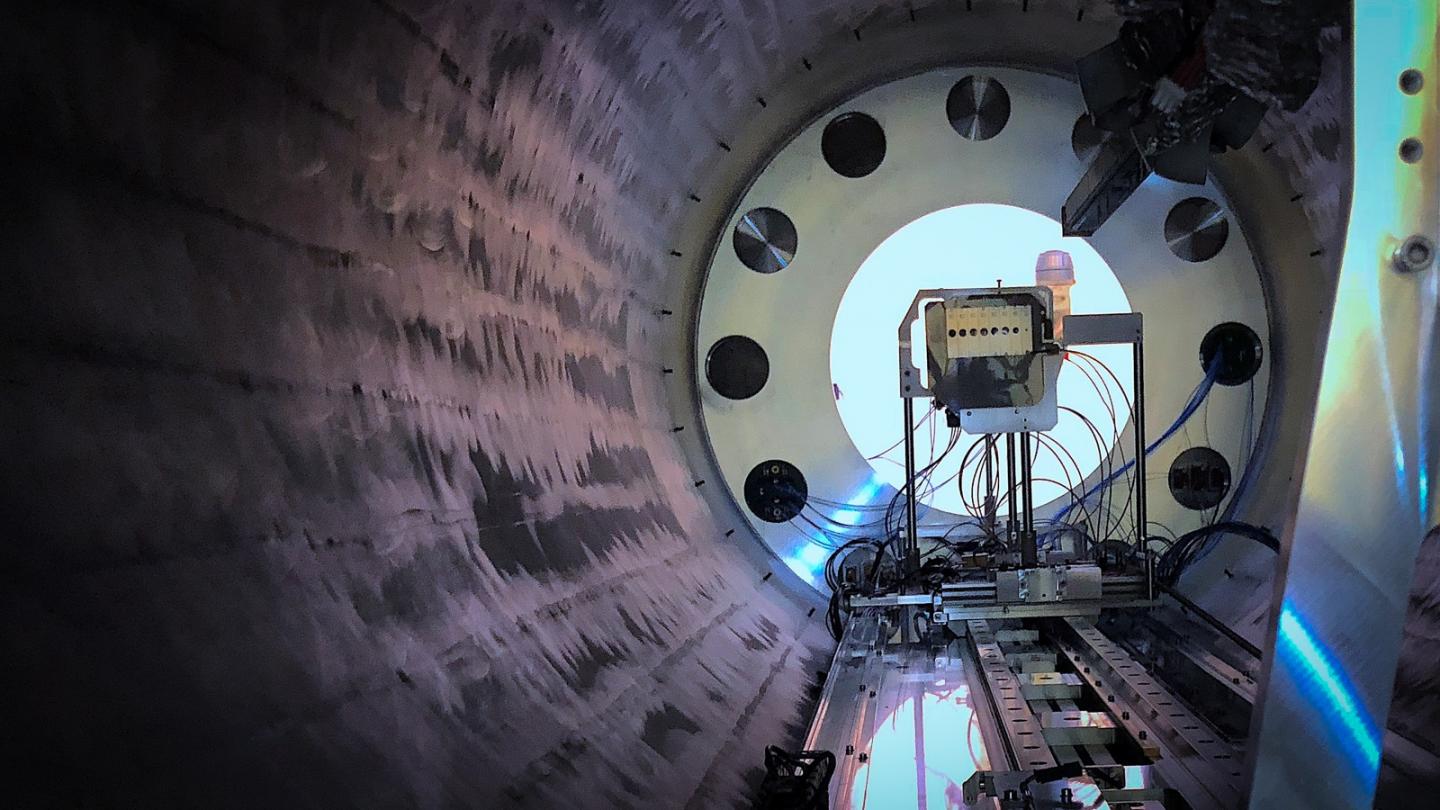 A look inside the ISOLDE Solenoid Spectrometer at CERN.
Argonne National Laboratory

A long-held mystery in the field of nuclear physics is why the universe is composed of the specific materials we see around us. In other words, why is it made of "this" stuff and not other stuff?

Specifically of interest are the physical processes responsible for producing heavy elements—like gold, platinum, and uranium—that are thought to happen during neutron star mergers and explosive stellar events.

Scientists from the US Department of Energy's (DOE) Argonne National Laboratory led an international nuclear physics experiment conducted at CERN, the European Organization for Nuclear Research, that utilizes novel techniques developed at Argonne to study the nature and origin of heavy elements in the universe. The study may provide critical insights into the processes that work together to create the exotic nuclei, and it will inform models of stellar events and the early universe.

The nuclear physicists in the collaboration are the first to observe the neutron-shell structure of a nucleus with fewer protons than lead and more than 126 neutrons—"magic numbers" in the field of nuclear physics.

At these magic numbers, of which 8, 20, 28, 50, and 126 are canonical values, nuclei have enhanced stability, much as the noble gases do with closed electron shells. Nuclei with neutrons above the magic number of 126 are largely unexplored because they are difficult to produce. Knowledge of their behavior is crucial for understanding the rapid neutron-capture process, or r-process, that produces many of the heavy elements in the universe.

The r-process is thought to occur in extreme stellar conditions such as neutron-star mergers or supernovae. These neutron rich environments are where nuclei can rapidly grow, capturing neutrons to produce new and heavier elements before they have chance to decay.

This experiment focused on the mercury isotope 207Hg. The study of 207Hg could shed light on the properties of its close neighbors, nuclei directly involved in key aspects of the r-process.

"One of the biggest questions of this century has been how the elements formed at the beginning of the universe," said Argonne physicist Ben Kay, the lead scientist on the study. "It's difficult to research because we can't just go dig up a supernova out of the earth, so we have to create these extreme environments and study the reactions that occur in them."

Related Article: Scientists Decode the Origin of Universe’s Heavy Elements in the Light from a Neutron Star Merger

To study the structure of 207Hg, the researchers first used the HIE-ISOLDE facility at CERN in Geneva, Switzerland. A high-energy beam of protons was fired at a molten lead target, with the resulting collisions producing hundreds of exotic and radioactive isotopes.

They then separated 206Hg nuclei from the other fragments and used CERN's HIE-ISOLDE accelerator to create a beam of the nuclei with the highest energy ever achieved at that accelerator facility. They then focused the beam at a deuterium target inside the new ISOLDE Solenoidal Spectrometer (ISS).

"No other facility can make mercury beams of this mass and accelerate them to these energies," said Kay. "This, coupled with the outstanding resolving power of the ISS, allowed us to observe the spectrum of excited states in 207Hg for the first time."

The ISS is a newly-developed magnetic spectrometer that the nuclear physicists used to detect instances of 206Hg nuclei capturing a neutron and becoming 207Hg. The spectrometer's solenoidal magnet is a recycled 4-Tesla superconducting MRI magnet from a hospital in Australia. It was moved to CERN and installed at ISOLDE, thanks to a UK-led collaboration between University of Liverpool, University of Manchester, Daresbury Laboratory, and collaborators from KU Leuven in Belgium.

Deuterium, a rare heavy isotope of hydrogen, consists of a proton and neutron. When 206Hg captures a neutron from the deuterium target, the proton recoils. The protons emitted during these reactions travel to the detector in the ISS, and their energy and position yield key information on the structure of the nucleus and how it is bound together. These properties have a significant impact on the r-process, and the results can inform important calculations in models of nuclear astrophysics.

The ISS uses a pioneering concept suggested by Argonne distinguished fellow John Schiffer that was built as the lab's helical orbital spectrometer, HELIOS—the instrument that inspired the development of the ISS spectrometer. HELIOS has allowed exploration of nuclear properties that were once impossible to study, but thanks to HELIOS, have been carried out at Argonne since 2008. CERN's ISOLDE facility can produce beams of nuclei that complement those that can be made at Argonne.

For the past century, nuclear physicists have been able to gather information about nuclei from the study of collisions where light ion beams hit heavy targets. However, when heavy beams hit light targets, the physics of the collision becomes distorted and more difficult to parse. Argonne's HELIOS concept was the solution to removing this distortion.

"When you've got a cannonball of a beam hitting a fragile target, the kinematics change, and the resulting spectra are compressed," said Kay. "But John Schiffer realized that when the collision occurs inside a magnet, the emitted protons travel in a spiral pattern towards the detector, and by a mathematical 'trick,' this unfolds the kinematic compression, resulting in an uncompressed spectrum that reveals the underlying nuclear structure."

The first analyses of the data from the CERN experiment confirm the theoretical predictions of current nuclear models, and the team plans to study other nuclei in the region of 207Hg using these new capabilities, giving deeper insights into the unknown regions of nuclear physics and the r-process.