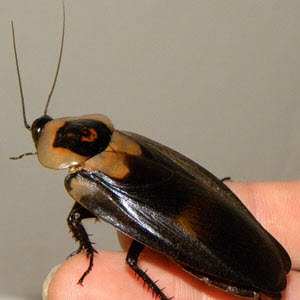 Death’s head roaches will be among the insects whose smell navigation skills will be studied as part of a project just funded by the National Science Foundation.Photo courtesy of the University of California, BerkeleyA team of scientists, including a UC Berkeley pioneer in odor mapping, has received a $6.4 million grant from the National Science Foundation to dig deeper into how humans and animals navigate by using their sense of smell and converting odors into spatial information.

The NSF this week awarded $15 million to three interdisciplinary teams of scientists to “crack the olfactory code” as part of President Obama’s BRAIN initiative.

“Olfaction is one of the last frontiers of neuroscience, the least understood of the five senses, so this is a big win,” said UC Berkeley psychologist Lucia Jacobs, one of 30 researchers who hashed out ideas and presented research proposals at the NSF’s Ideas Lab in Virginia in June.

“We can create a virtual olfactory landscape for the animals and see how they respond behaviorally and in terms of neural activity,” she added.

Jacobs’ team will use the money to study how diverse animals, including insects, navigate a highly customized “smellscape.” University of Colorado engineering professor John Crimaldi, principal investigator of the project and an expert in fluid dynamics, will design the odor landscape that Jacobs will use to study the smell navigation skills of hermit crabs, leopard slugs, death’s head and American cockroaches.

“All of these species are known to orient, just like the common laboratory animals, to odors in the air and to find the source of these odors,” Jacobs said. “We also have neuroscientists who will use advanced methods to tell us what the brain is doing when two lab species, a mouse and a fruit fly, engage in this same behavior.“

When we smell, odor molecules travel up the nasal passage, where they are identified by receptors that send signals to the olfactory bulb, which processes the information. Humans are thought to have about 400 working olfactory receptors, a dog, 800 and a mouse, 1,100.

“We know a large, ancient part of the brain is devoted to olfaction, and that virtually all animals, including humans, use smell to navigate,” she added. “But we still don’t know exactly how the brain does it, and that’s what we mean to find out.”

Computational modeling will be used to simulate the odor navigation processes used by the critters.

“By studying not only the typical lab species but also adding animals with very different nervous systems, such as crustacean crabs, molluscan slugs and insect groups, we will be able to test our computational models very rigorously to be sure they don’t just work for a couple of domesticated lab species,” Jacobs said.

For example, she said, “The American cockroach is one of the fastest land animals, the leopard slug one of the slowest, yet both orient to the same airborne odors. How are they similar or different, at different scales of time and space? That is what my lab will tackle.”

In addition to Jacobs and Crimaldi, members of the research team are Jonathan Victor of Weill Cornell Medical College, Nathaniel Urban and G. Bard Ermentrout of the University of Pittsburgh, Katherine Nagel of New York University and Justus Verhagen of Yale’s John Pierce Laboratory.