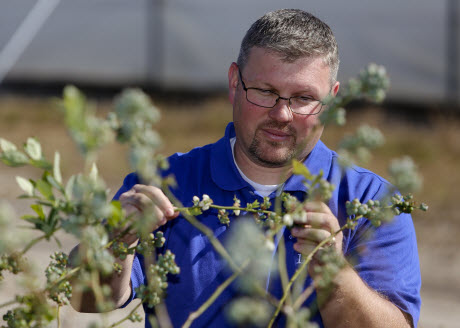 UF/IFAS blueberry breeder Jim Olmstead looks over blueberry bushes. Olmstead, an associate professor in horticultural sciences, led a team of UF/IFAS researchers on a three-year study, as they conducted taste tests on 19 cultivars to find the best genetic traits to breed better-tasting blueberries in all sorts of climates.Photo credit: Tyler L. Jones, UF/IFAS photographyGAINESVILLE, Fla. — University of Florida Institute of Food and Agricultural Sciences researchers have taken a big step toward breeding tastier blueberries with a three-year study that examined the traits consumers desire. Now they have specific breeding targets to improve flavor.

For a study published Sept. 17 in the online journal PLOS ONE, UF/IFAS Plant Innovation Center scientists harvested 19 cultivars of blueberries and tested them in 30 panels at the UF sensory lab. The diverse group of cultivars allowed researchers to test a wide range of blueberry flavors, said Jim Olmstead, UF/IFAS associate professor of horticultural sciences. 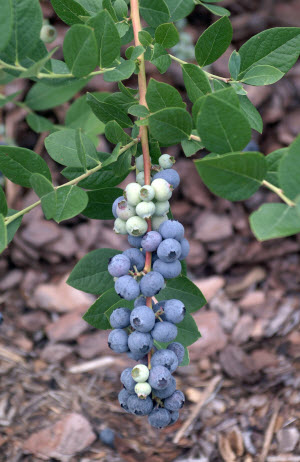 A recent study builds on one last year in which UF/IFAS scientists found that consumers prefer blueberries’ taste over their nutritional value when surveyed about blueberry preferences.Photo credit: Credit: Tyler L. Jones, UF/IFAS photographyOf the 217 people who taste-tested the blueberries, many were repeat panelists, said Olmstead, who led the experiment. As a result of the high participation level, researchers were able to determine which biochemical compounds were most closely associated with blueberry flavor and that people liked the most.

With blueberries, scientists can make clones of each cultivar, so the same plant – with the same set of genetic characteristics – can be grown in different environments and under different farm management practices, Olmstead said.

“After identifying the compounds most associated with blueberry flavor, we sought to determine those that are more regulated by genetics,” Olmstead said. “These are the things that can be improved by breeding and selection.”

But as a breeder, Olmstead said he can select cultivars for higher or lower levels of a taste compound if it has a high level of genetic control.

“We put the same genetics in different environments to determine which compounds were the most stable,” Olmstead said.

This study builds on one last year in which UF/IFAS scientists found that consumers prefer blueberries’ taste over their nutritional value when surveyed about blueberry preferences. Both of these studies are part of an ongoing group effort by multi-disciplinary scientists in the UF/IFAS Plant Innovation Center to make new fruit cultivars that appeal to consumers because they look, smell and taste better.