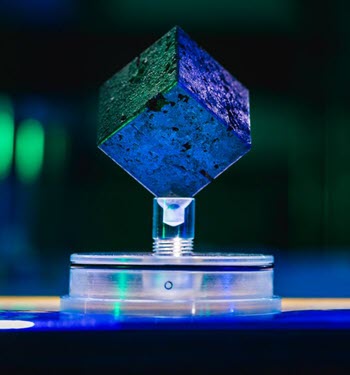 Recognize this cube? It's one of the 664 uranium cubes from the failed nuclear reactor that German scientists tried to build in Haigerloch during World War IICREDIT: John T. Consoli / University of Maryland

Back in 2013, Timothy Koeth, an associate research professor at the University of Maryland, received a rather extraordinary birthday gift: a little cloth lunch pouch containing a small object wrapped in brown paper towels. As Koeth peeled back the layers, his eyes grew wide with astonishment. He immediately asked, "Where did you get that?"

Inside he found a heavy metal cube and a crumpled message, a provocative note wrapped around a stone that came crashing through the window of history. It read, "Taken from Germany, from the nuclear reactor Hitler tried to build. Gift of Ninninger."

Koeth's friend grinned, picked up the five-pound block of uranium metal and handed it to him. Though modest in size, the cube was heavy, dense, and steeped in lost history. Koeth accepted the cube and its note as an invitation to the adventure of a lifetime.

In the May 2019 issue of Physics Today, Koeth and Miriam Hiebert, a doctoral candidate working with him on this project at UMD's A. James Clark School of Engineering, describe what they've discovered while exploring the German quest and failure to build a working nuclear reactor during World War II.

Uranium is weakly radioactive, and this particular cube measures about two inches on each side. "It's surprisingly heavy, given its size, and it's always a lot of fun to watch people's reaction when they pick it up for the first time," said Hiebert.

A chandelier of nuclear elements

This cube represents one of 664 uranium metal components that were strung together in a form reminiscent of a chandelier to comprise the core of a nuclear reactor experiment that a team of German scientists attempted to build toward the end of the World War II, including Werner Heisenberg—a theoretical physicist and one of the key visionaries of quantum mechanics. The chandelier was submerged in heavy water to regulate the rate of fission.

The Germans' experimental lab was small and located underground in the town of Haigerloch—it's now the Atomkeller Museum, which the public can visit. "This experiment was their final and closest attempt to create a self-sustaining nuclear reactor, but there wasn't enough uranium present in the core to achieve this goal," said Koeth.

One of the most surprising things Koeth and Hiebert have discovered so far is that while the 664 uranium cubes at Haigerloch weren't enough to build a self-sustaining reactor, an additional 400 cubes were located within Germany at the time.

"If the Germans had pooled their resources, rather than keeping them divided among separate, rival experiments, they may have been able to build a working nuclear reactor," said Hiebert. "This highlights perhaps the biggest difference between the German and American nuclear research programs. The German program was divided and competitive; whereas, under the leadership of General Leslie Groves, the American Manhattan Project was centralized and collaborative."

How close did the Germans get?

How close did the Germans get to a working nuclear reactor? This is difficult to answer, but "it's been calculated that the reactor experiment in Haigerloch would have needed about 50 percent more uranium to run," said Koeth. "Even if the 400 additional cubes had been brought to Haigerloch to use within that reactor experiment, the German scientists would have still needed more heavy water to make the reactor work. Despite being the birthplace of nuclear physics and having nearly a two-year head start on American efforts, there was no imminent threat of a nuclear Germany by the end of the war."

Another important aspect of Koeth and Hiebert's work is an effort to track down the cubes recovered from Haigerloch that ended up being shipped to the U.S. "Cubes were distributed to various individuals around the country," Hiebert explained. "We don't know how many were handed out or what happened to the rest, but there are likely more cubes hiding in basements and offices around the country, and we'd like to find them!"

Many questions remain unanswered, and chief among them are: How many of these cubes still exist, and what has happened to them?

"We hope to speak to as many people as possible who've had contact with these cubes," said Hiebert. "As much as we've learned about our cube and others like it, we still don't have an answer about how exactly it ended up in Maryland 70 years after being captured by Allied forces in southern Germany."

Koeth and Hiebert are also trying to learn more about the fate of the other 400 cubes that ended up on the black market in Europe after the war.

Many questions remain unanswered, and chief among them are: How many of these cubes still exist, and what has happened to them? Physics Today helped track down a few; read more here.