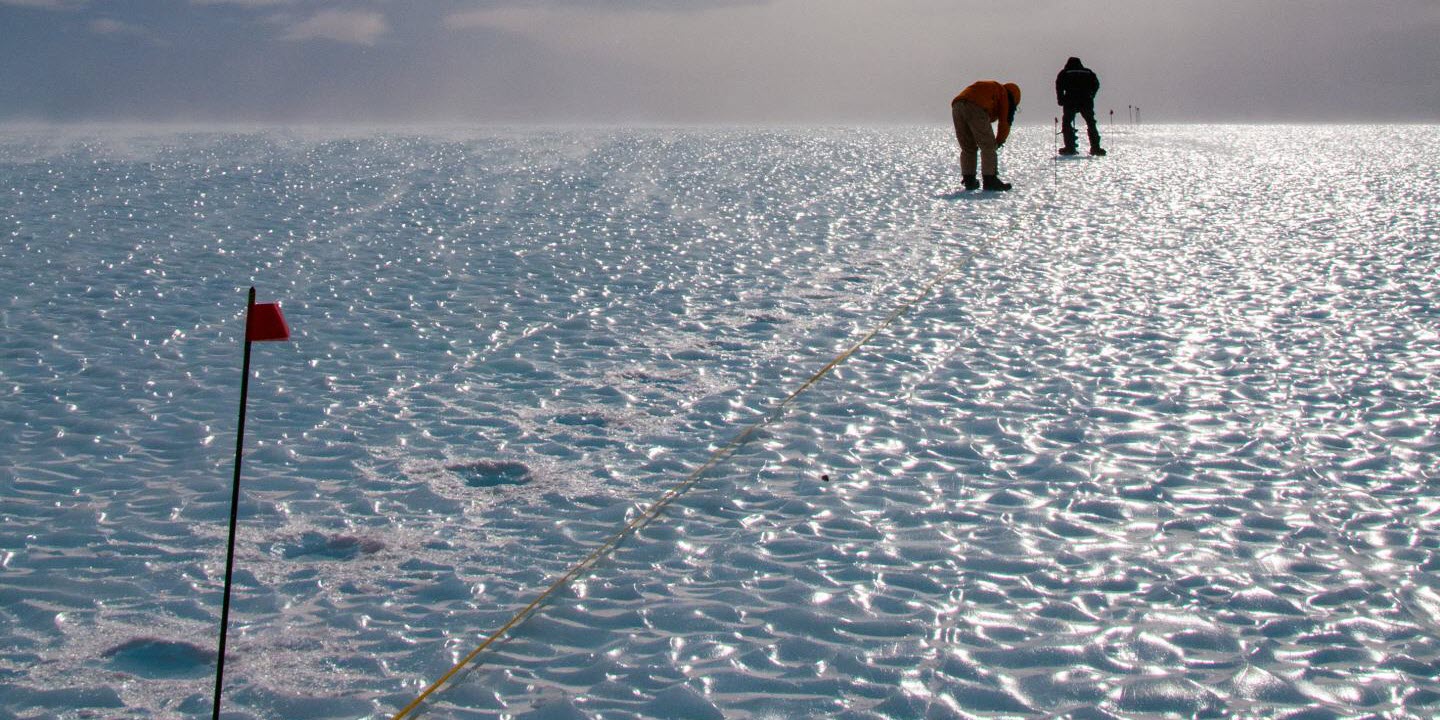 Sea ice across the Southern Ocean played a crucial role in controlling atmospheric carbon dioxide levels during times of past climate change—and it could provide a critical resource to improve Earth system models, a new study shows.

The paper by scientists from UNSW and Keele University was published June 22 in Nature Geoscience.

Led by Chris Fogwill, an honorary professor at UNSW and professor at Keele University, the international team of researchers demonstrated that seasonal growth and destruction of sea ice in a warming world enhances the amount of marine life present in the sea around Antarctica, sequestering carbon from the atmosphere, which ultimately becomes stored in the deep ocean.

"The Southern Ocean occupies 14 percent of the Earth's surface and plays a fundamental role in the global carbon cycle and climate," says Fogwill.

"It has captured around half of all human-related carbon that has entered the ocean to date, and is therefore crucial for regulating carbon dioxide levels resulting from human activity—and understanding the processes that determine its effectiveness as a carbon sink through time are essential to reducing uncertainty in future projections."

To understand this process further, Fogwill and colleagues studied data relating to a period where atmospheric carbon dioxide levels changed rapidly—after the Last Ice Age, around 18,000 years ago, when the world transitioned naturally into the warm interglacial world we live in today.

During this period, carbon dioxide rose rapidly from around 190 parts per million (ppm) to 280 ppm over around 7,000 years, but one period in particular stands out; a 1,900 year period where carbon dioxide levels plateaued at a nearly constant level of 240 ppm.

The cause of this plateau, which occurred around 14,600 years ago, is unknown, but understanding what happened during this period could be crucial for improving climate change projections.

Walking back in time across ice

To resolve this question, the researchers traveled to the Patriot Hills Blue Ice Area of Antarctica to develop new records of evidence of marine life that are captured in ice cores.

"Blue ice areas are the perfect laboratory for Antarctic scientists due to their unique topography. Created by fierce, high-density winds, the top layer of snow is effectively eroded, exposing the ice below. As a result, ice flows up to the surface, providing access to ancient ice below," says co-author and UNSW Sydney professor Chris Turney.

"Instead of drilling kilometers into the ice, we can simply walk across a blue ice area and travel back through time."

This type of blue ice lets scientists sample large amounts of ice for studying past environmental changes in detail.

"Organic biomarkers and DNA from the Southern Ocean are blown onto Antarctica and preserved in the ice, providing a unique record in a region where we have few scientific observations," Turney says.

Co-author  and professor Andy Baker from UNSW Science says to pursue the idea of using organic matter trapped in ice, he helped to set up a methodology which allowed the team to look at the natural fluorescence of some organic molecules that they found in the ice:

"We knew this technique had amazingly good detection limits, and we thought we would need this given the small amounts of organic material we expected to find in the ice. We found the organic matter fluorescence signal that is normally associated with microbes.

"But where did this fluorescent organic matter come from? Because the team could walk across the ice, rather than core it, they could collect larger samples for organic techniques that needed that larger amount for analysis. These showed that the fluorescent organic matter could be identified as coming from the oceans. Transported from the oceans in the air, it was ultimately deposited as snow and preserved in the ice."

Using this approach, the team discovered that there was a marked increase in the number and diversity of marine organisms present across the 1,900 year period when carbon dioxide plateaued, an observation which had never been recorded before.

"This is the first recorded evidence of increased biological productivity in the Antarctic zone during that period, and suggests that Southern Ocean processes may have caused the carbon dioxide plateau," co-author Dr. Laurie Menviel from UNSW Science says.

However, the driver of this increase in marine organisms wasn't immediately clear to the scientists, so they used climate modelling to better understand the potential cause.

"The modeling revealed that the plateau period coincided with the greatest seasonal changes in sea ice, which occurred during a pronounced cold phase across the Southern Ocean known as the Antarctic Cold Reversal," Menviel says. "During this period, sea ice grew extensively across the Southern Ocean, but as the world was warming rapidly, each year the sea ice would be rapidly destroyed during the summer.

"We need to understand the ways in which carbon dioxide levels have been stabilized by natural processes in the past. Under future warming, less sea ice will likely mean a weakening of this part of the carbon sink, making it increasingly difficult to meet Australia's commitment to the Paris Agreement," Turney says.

"A lot of science can just focus on one specific process such as a physical, biological, or chemical aspect, but this work is a true interdisciplinary collaboration. It's only when you look at the combination of all these different roles that you get the main story—while it can be tempting to just go down one route, we got together a big team with a range of different expertise which allowed us to get a broader understanding of the system."

"This paper will also be known for developing a 'toolkit' of analyses on the trace amounts of organic material in ice," Baker says. "This opens a new door for the global research community who can now think of using organic analyses to understand past climate changes."

The researchers will now use these findings to underpin the development of future Earth system models. The coupling of Southern Ocean and ecosystem dynamics in a new generation of models will be crucial for reducing uncertainties around climate projections, and will help society adapt to future warming.