How can we know anything about the carbon dioxide levels in the atmosphere in Earth’s deep past? Tiny bubbles trapped in ice provide samples of ancient air, but this record goes back only  800,000 years. To reach further, scientists must depend on climate proxies, or measurable parameters that vary systematically with climate conditions.

The standard proxy is the oxygen isotope ratios in tiny zooplankton called foraminifera. There are more than 50,000 different species of these bugs, 10,000 living and 40,000 extinct. Because the foraminifera shells fairly faithfully record the ratios of oxygen isotopes in seawater, they provide a signal that can be used to infer ancient temperatures.

There’s another potential proxy gathering dust in the sedimentary archive: tiny phytoplankton called coccolithophores.  They are found in large numbers throughout the sunlight layer of the ocean. Their tiny, hubcap-like plates, called coccoliths, are the main component of the Chalk, the Late Cretaceous formation that outcrops at the White Cliffs of Dover, and a major component of the “calcareous ooze” that covers much of the seafloor.

Because coccolithophores are primary producers  that are important to ocean biogeochemistry, they are well-studied organisms. They are less used for  paleoceanographic reconstructions than foraminifera, however, because they create their plates inside their cells rather than precipitating them directly from seawater. This means there is a  large biological overprint on the climate signal that makes it difficult to interpret.

But new findings, published in the Feb. 28 issue of the journal Nature Communications, could change that.

Recreating the prehistoric environment in laboratory conditions, a team of scientists from the University of Oxford, including Harry McClelland, now a postdoctoral research associate at Washington University in St. Louis, and the Plymouth Marine Laboratory grew several different species of this algae, each with varying carbon levels.

With this experimental data, they created a mathematical model of carbon fluxes in the coccolithophore cell that accounts for previously unexplained variations in the isotopic composition of the platelets the algae produce and provides the framework for the development of a new set of proxies.

Properly understood, the “noise” may itself be a signal. Coccoliths provide a window on ancient biology as well as climate, McClelland said. 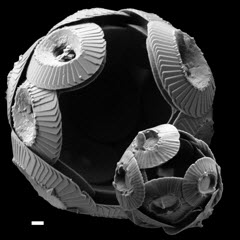 Coccolithophores surround themselves with platelets of calcium carbonate, shown here greatly magnified. Because calcium carbonate is transparent, the platelet’s don’t compromise the organism’s ability to photosynthesize. The scale bar represents a millionth of a meter.Photo credit: Hermoso and McClellandMcClelland explains that the scientists began with a bit of a mystery. Coccoliths had been divided into two groups—a light and a heavy group—based on whether the platelets they precipitated were poorer or richer in the rarer heavy isotope of carbon compared to calcium carbonate formed by physical (abiotic) processes. The departures from abiotic norm were “both large and enigmatic,” McClelland said.

Heavy isotopes undergo all of the same chemical reactions as light isotopes, but, simply because they have slightly different masses, they do so at slightly different rates. These tiny differences in reaction rates cause the products of reactions to have different isotope ratios than the source materials.

The coccolithophores undertake the relevant carbon chemistry in two different cellular compartments: the chloroplast, where photosynthesis takes place, and coccolith vesicles, where platelets are precipitated. The main problem with deciphering their isotopic record the algae leave is that these two processes drive the isotopic composition of the carbon pool in opposite directions.

In their chloroplasts, coccolithophores take inorganic carbon and build it into biological molecules. This process proceeds far more rapidly for the CO2-containing the light isotope of carbon, causing the isotopic composition to drift to the heavier variant. Platelets growing in coccolith vesicles, on the other hand, preferentially incorporate the heavier form of carbon from the substrate pool.

The team chose a number of coccolithophore species, both light and heavy, and grew them in the laboratory—“it’s not all that different from gardening,” McClelland said—and then constructed a mathematical model of the cell that could predict the isotopic outcomes across all species for which data was available.

They were able to show that the ratio of calcification to photosynthesis determines whether the platelets are isotopically heavier or lighter than abiogenic calcium carbonate. They were able to explain the size of the departure as well its direction.

For McClelland, the most exciting part of the study is that it opens a window on the biology of ancient creatures. When people use foraminifera as a climate proxy, he said, they usually pick one species and assume a constant biological effect, or offset. But we can see the impact of varying biology in the chemical signatures of the coccolithophores.

With more research, McClelland said, coccolith-based isotopic ratios could be developed into a paleobarometer that would help us to understand the climate system’s sensitivity to atmospheric carbon dioxide.

“Our model allows scientists to understand algal signals of the past, like never before. It unlocks the potential of fossilized coccolithophores to become a routine tool, used in studying ancient algal physiology and also ultimately as a recorder of past CO2 levels,” said senior author Rosalind Rickaby, professor of biogeochemistry at Oxford. 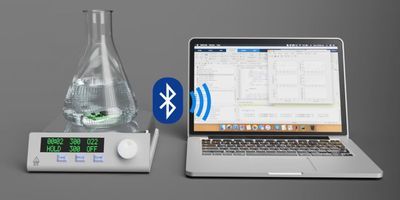