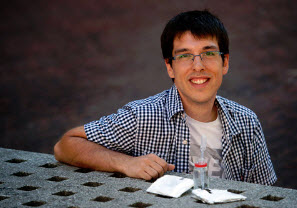 Alexander SantiagoPhoto courtesy of the University of the Basque CountryAlexander Santiago, a researcher in the Department of Polymer Science and Technology at the UPV/EHU's Faculty of Chemistry, has developed three types of functional coatings that are resistant to microorganisms and have self-cleaning and anti-reflective properties. By modifying the surface of paints he has managed to vary their properties or their possible applications at a lower cost in comparison with the materials existing on the market.

Coatings or paints are materials applied to different surfaces basically for decorative and protective purposes. Yet today the market for these materials is being subjected to increasingly tougher specifications. In addition to being decorative and protective, today's coatings must have additional properties such as, for example, low microorganism-adherence, ease of cleaning, or self-repair properties. The development of materials of this type, known as "functional coatings," calls for the control not only of their physical properties (mainly to do with their morphology) but also of the chemical ones of the surfaces produced.

Santiago's research set out to make a contribution towards the development of three types of functional coatings: ones that are resistant to microorganisms (for example for paints for seagoing vessels), and which have self-cleaning (hydrophobic paints) and anti-reflecting properties (for coating mobile phone screens or spectacle lenses). 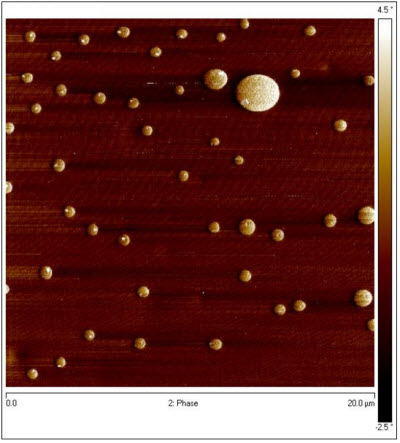 Detail of the phase separation in the copolymer: when the siloxane (areas where yellow predominates) migrates to the surface, it generates greater roughness, and due to its hydrophobic characteristics, prevents the adhesion of organisms.Image courtesy of the University of the Basque Country The first of the hydrophobic coatings he explored was a type of copolymer that gives rise to spontaneous phase separation between its components. In other words, "one of the components of the copolymer (the polyurethane) gives the substrate adhesion and most of the other component (the siloxane) remains on the surface, which makes it rougher, and as it is also hydrophobic it stops organisms sticking to it," explained Santiago. Through various measurements they confirmed that the hydrophobicity of the system depended to a greater extent on roughness than on the siloxane concentration on the surface. Protein absorption measurements were used to determine the restriction of the adhesion capacity of the microorganisms on these films. These trials showed that the microorganisms stuck less to the films displaying phase separation.

To obtain materials that would display a self-cleaning effect (within the line of hydrophobic coatings), inorganic nanoparticles of a hydrophobic nature were synthesised in advance and inserted into acrylic polymers using various methods. Specifically, they were silicon nanoparticles with an organic coating. The best results were obtained by spraying these nanoparticles onto acrylic films, and that way a super-hydrophobic surface was created offering very good self-cleaning properties in addition to a high level of toughness. The method used "turned out to be a fast and relatively cost-effective one," said the researcher, "as we used silicon that is not as expensive as other substances used on the market."

To obtain anti-reflecting properties, the films need to have a refractive index lower than that of the substrate, which can be achieved by inserting porosity into them. But the presence of the pores prevents the anti-reflecting surfaces from having suitable mechanical properties enabling them to be processed. In this respect, he studied the porosity/toughness relation with respect to the refractive index obtained and the results were promising.

As the researcher explained, "there is still work to be done because, for example, the nanoparticles do not take hold completely and because the final film with the nanoparticles is not as consistent as we would like." As regards the copolymers studied in relation to the biological anti-contamination properties, he said that "the early results were fairly favorable," and added that "they could be extrapolated, but the problem is that we are working on a laboratory scale." Finally, the researcher explained that the subject of anti-reflective coatings was only at the early stages of research and "we are still improving it."