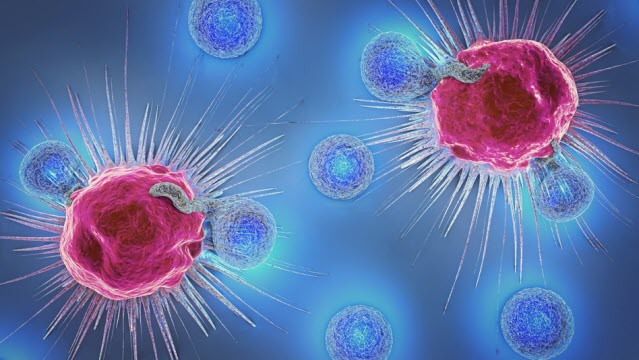 MIT chemical engineers have developed a new sensor that lets them see inside cancer cells and determine whether the cells are responding to a particular type of chemotherapy drug.

The sensors, which detect hydrogen peroxide inside human cells, could help researchers identify new cancer drugs that boost levels of hydrogen peroxide, which induces programmed cell death. The sensors could also be adapted to screen individual patients’ tumors to predict whether such drugs would be effective against them.

“The same therapy isn’t going to work against all tumors,” says Hadley Sikes, an associate professor of chemical engineering at MIT. “Currently there’s a real dearth of quantitative, chemically specific tools to be able to measure the changes that occur in tumor cells versus normal cells in response to drug treatment.”

Cancer cells often have mutations that cause their metabolism to go awry and produce abnormally high fluxes of hydrogen peroxide. When too much of the molecule is produced, it can damage cells, so cancer cells become highly dependent on antioxidant systems that remove hydrogen peroxide from cells.

Drugs that target this vulnerability, which are known as “redox drugs,” can work by either disabling the antioxidant systems or further boosting production of hydrogen peroxide. Many such drugs have entered clinical trials, with mixed results.

“One of the problems is that the clinical trials usually find that they work for some patients and they don’t work for other patients,” Sikes says. “We really need tools to be able to do more well-designed trials where we figure out which patients are going to respond to this approach and which aren’t, so more of these drugs can be approved.”

To help move toward that goal, Sikes set out to design a sensor that could sensitively detect hydrogen peroxide inside human cells, allowing scientists to measure a cell’s response to such drugs.

Existing hydrogen peroxide sensors are based on proteins called transcription factors, taken from microbes and engineered to fluoresce when they react with hydrogen peroxide. Sikes and her colleagues tried to use these in human cells but found that they were not sensitive in the range of hydrogen peroxide they were trying to detect, which led them to seek human proteins that could perform the task.

Through studies of the network of human proteins that become oxidized with increasing hydrogen peroxide, the researchers identified an enzyme called peroxiredoxin that dominates most human cells’ reactions with the molecule. One of this enzyme’s many functions is sensing changes in hydrogen peroxide levels.

Sikes envisions two major uses for this sensor. One is to screen libraries of existing drugs, or compounds that could potentially be used as drugs, to determine if they have the desired effect of increasing hydrogen peroxide concentration in cancer cells. Another potential use is to screen patients before they receive such drugs, to see if the drugs will be successful against each patient’s tumor. Sikes is now pursuing both of these approaches.

“You have to know which cancer drugs work in this way, and then which tumors are going to respond,” she says. “Those are two separate but related problems that both need to be solved for this approach to have practical impact in the clinic.”