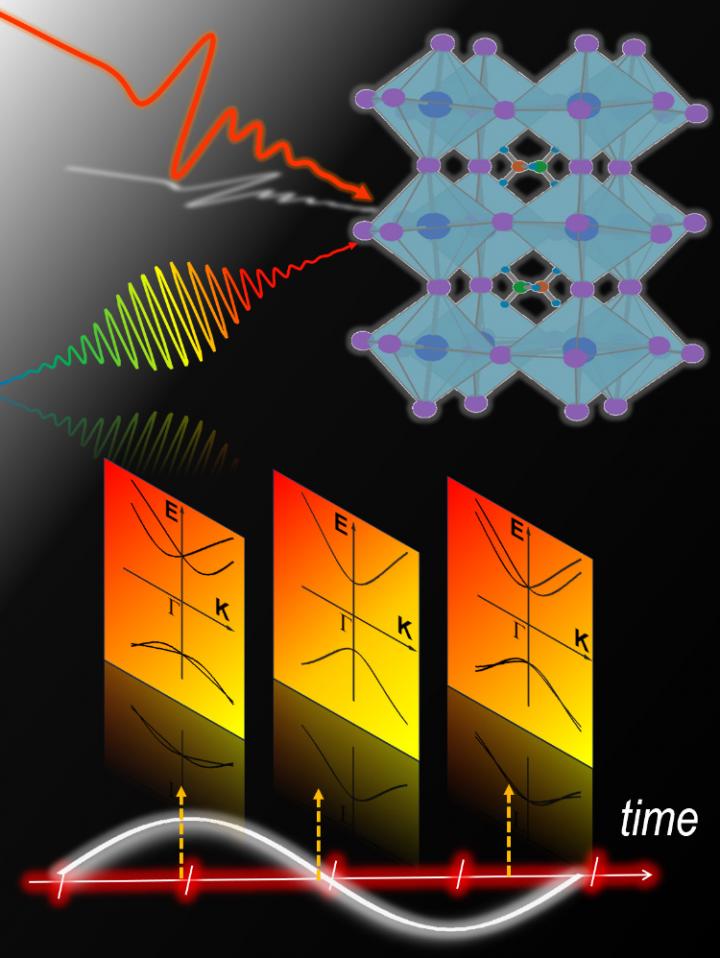 Ames Laboratory scientists discovered evidence of the Rashba effect by using extremely strong and powerful bursts of light firing at trillions of cycles per second to switch on or synchronize a "beat" of quantum motion within a material sample; and a second burst of light to "listen" to the beats, triggering an ultrafast receiver to record images of the oscillating state of matter.
US Department of Energy, Ames Laboratory

Scientists have theorized that organometallic halide perovskites—a class of light harvesting "wonder" materials for applications in solar cells and quantum electronics—are so promising due to an unseen yet highly controversial mechanism called the Rashba effect. Scientists at the US Department of Energy's Ames Laboratory have now experimentally proven the existence of the effect in bulk perovskites, using short microwave bursts of light to both produce and then record a rhythm, much like music, of the quantum coupled motion of atoms and electrons in these materials.

Organometallic halide perovskites were first introduced in solar cells about a decade ago. Since then, they have been studied intensely for use in light-harvesting, photonics, and electronic transport devices, because they deliver highly sought-after optical and dielectric properties. They combine the high energy conversion performance of traditional inorganic photovoltaic devices, with the inexpensive material costs and fabrication methods of organic versions.

Research thus far hypothesized that the materials' extraordinary electronic, magnetic, and optical properties are related to the Rashba effect, a mechanism that controls the magnetic and electronic structure and charge carrier lifetimes. But despite recent intense study and debate, conclusive evidence of Rashba effects in bulk organometallic halide perovskites, used in the most efficient perovskite solar cells, remained highly elusive.

Ames Laboratory scientists discovered that evidence by using terahertz light, extremely strong and powerful bursts of light firing at trillions of cycles per second, to switch on or synchronize a "beat" of quantum motion within a material sample; and a second burst of light to "listen" to the beats, triggering an ultrafast receiver to record images of the oscillating state of matter. This approach overcame the limitations of conventional detection methods, which did not have the resolution or sensitivity to capture the evidence of the Rashba effect hidden in the material's atomic structure.

"Our discovery settles the debate of the presence of Rashba effects: They do exist in bulk metal halide perovskite materials." said Jigang Wang, senior scientist at Ames Laboratory and professor of physics at Iowa State University. "By steering quantum motions of atoms and electrons to engineer Rashba split bands, we achieve a significant leap forward for the fundamental discovery of the effect which had been hidden by random local fluctuations, and also open exciting opportunities for spintronic and photovoltaic applications based on quantum control of perovskite materials."

Wang and his collaborators at Ames Laboratory and Iowa State University Department of Physics and Astronomy were responsible for terahertz quantum beat spectroscopy, model building, and density functional theoretical simulations. High quality perovskite materials were provided by the University of Toledo. Phonon spectra simulations were performed at the University of Science and Technology of China.

- This press release was originally published on the Ames Laboratory website