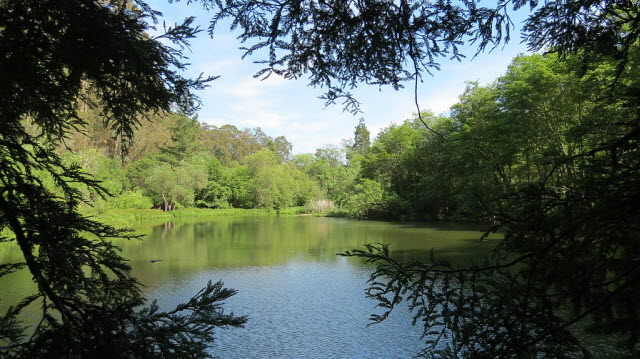 This lake in Berkeley, California was one source of the toluene-producing enzyme (phenylacetate decarboxylase) discovered in the JBEI study.Photo Credit: Chickmarkley

Researchers at the U.S. Department of Energy Joint BioEnergy Institute (JBEI) and Lawrence Berkeley National Laboratory (Berkeley Lab) have discovered a new enzyme that will enable microbial production of a renewable alternative to petroleum-based toluene, a widely used octane booster in gasoline that has a global market of 29 million tons per year.

Results from a study led by Harry Beller, Berkeley Lab senior scientist and scientific lead at JBEI, were published Monday in the journal Nature Chemical Biology. The other lead co-authors are Andria Rodrigues and Kamrun Zargar of JBEI.

A major focus of research at JBEI, and in the broader community of biofuel researchers, is the production of industrially and commercially relevant fuels and chemicals from renewable resources, such as lignocellulosic biomass, rather than from petroleum. The enzyme discovered in this study will enable the first-time microbial production of bio-based toluene, and in fact, the first microbial production of any aromatic hydrocarbon biofuel.

The enzyme discovery resulted from the intensive study of two very different microbial communities that produced toluene. One community contained microbes from lake sediment, and the other from sewage sludge. Since microbes in the environment are a reservoir of enzymes that catalyze an extraordinarily diverse set of chemical reactions, it’s not unusual for scientists working in biotechnology to source enzymes from nature.

Beller was motivated to investigate bio-based toluene after reading literature reports from the 1980s that revealed microbial toluene biosynthesis in anoxic lake sediments. Despite a number of reports of bacterial toluene production since that time, the identity of the enzyme catalyzing this biochemically challenging reaction has been a mystery for decades.

The toluene-synthesizing enzyme discovered in this study, phenylacetate decarboxylase, belongs to a family of enzymes known as glycyl radical enzymes (GREs). Scientists only began to recognize GREs in the 1980s, and phenylacetate decarboxylase is just the eighth known GRE reaction type to have been discovered and characterized since then. However, metagenomic evidence presented in the JBEI study and others points to the fact that many more GREs exist in nature that have yet to be characterized.

The radical nature of GREs allows them to catalyze chemically challenging reactions, such as anaerobic decarboxylation of phenylacetate to generate toluene. Beyond their potential biotechnological applications, a number of known GREs are relevant to human health and occur within the human gut microbiome.

The process of enzyme discovery for this project was both challenging and unconventional. The researchers first started working with a bacterial species reported to make toluene, but when those reports appeared to be irreproducible, the scientists turned to the environment for toluene-producing cultures—specifically to municipal sewage and anoxic lake sediment.

“All enzyme discovery projects are challenging. But moving from discovery in a single bacterial species, to discovery in a complex microbial community from sewage sludge or lake sediments, was more difficult by orders of magnitude,” says Beller. “This study became a needle-in-a-haystack search for the toluene-producing enzyme in a candidate pool of hundreds of thousands of enzymes.”

In fact, metagenome analyses revealed that these microbial communities each contained more than 300,000 genes—the equivalent of more than 50 bacterial genomes. Another challenge was that the anaerobic microbial communities and many of their enzymes were sensitive to oxygen, forcing the scientists to manipulate cultures and enzymes under strictly anaerobic conditions.

The discovery process combined protein purification techniques used by biochemists for decades, such as fast protein liquid chromatography, with modern metagenomic, metaproteomic, and associated bioinformatic analyses, some of which were carried out in collaboration with the Joint Genome Institute, a DOE Office of Science User Facility. An important component of the discovery process was to validate the researchers’ predictions of the toluene biosynthesis enzyme with experiments using highly controlled assays involving purified proteins.

An intriguing question arising from this research is: why would a bacterium produce toluene? The researchers don’t have the definitive answer but present two hypotheses in the paper. One possibility is that the bacterium is producing toluene as a toxin to outcompete other microbes in its environment. Another hypothesis is that the phenylacetate decarboxylase (toluene-producing) reaction provides a strategy for the bacterium to regulate its internal pH in a somewhat acidic, fermentative environment.

Beller and his colleagues believe that their study results have implications for fundamental and applied science. From a biochemical perspective, the study expands the known catalytic range of GREs, and from a biotechnological perspective, it will enable first-time biochemical synthesis of an aromatic fuel hydrocarbon from renewable resources.

“We have so much to learn about the extraordinary metabolic diversity of bacteria,” Beller said. “Through eons of evolution, nature has devised enzymes that can catalyze difficult chemical reactions, and as we discover these, we can harness them for biotechnology.”