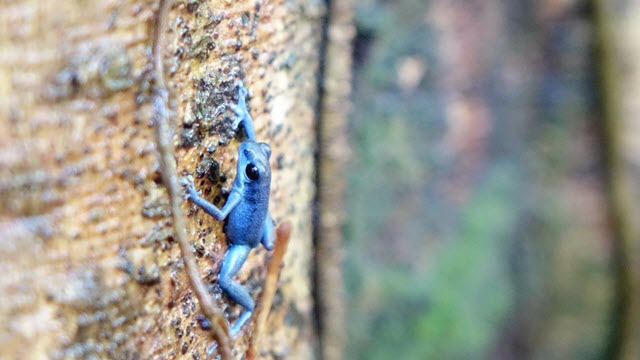 A strawberry poison frog, color morph blue, is photographed climbing a tree in the Aguacate region of Bocas Del Toro, Panama. These types of frogs' unique coloration will either attract mates of the same color or encourage fights between males of the same color, according to a study published by Yusan Yang, a graduate student in the Richards-Zawacki Lab in the Department of Biological Sciences, and associate professor and lab director Corrine Richards-Zawacki. The findings indicate that, over time, the behavior could lead to two different color types becoming two different species.Credit: Richards-Zawacki Lab

PITTSBURGH — A new study by University of Pittsburgh researchers indicates animals that seek mates and fight rivals that resemble their parents could be behaving in ways that lead to the formation of new species.

The study by Yusan Yang, a graduate student in the Richards-Zawacki Lab in the Department of Biological Sciences and associate professor Corinne Richards-Zawacki, examines behavioral imprinting—the phenomenon of offspring learning a parent's appearance to choose future mates or distinguish rivals—in the strawberry poison frog (Oophaga pumilio).

This central American frog has a wide variety of color types. The mother frog raises their tadpoles by feeding them unfertilized eggs. This mother-offspring interaction, the team discovered, influences the behaviors of the offspring: females grow up to prefer mates that have the same color as their mother and males grow up to be more aggressive when their rival has the same color as their mother.

The team developed a mathematical model to demonstrate how these imprinted behaviors can contribute to the formation of new species. Because of the imprinted preferences, females mate more with similar colored males, and less with differently colored males, which, over time, could lead to two color types becoming separate species.

"Sexual selection is traditionally thought of as a strong driving force for the formation of new species. But several theoretical models have suggested it was not incredibly likely to do so without natural selection or geographic separation," explained Yang.

"One of the reasons is because it is hard to maintain multiple mating types in the population. Usually, natural selection can serve the role, but our model suggests that imprinted male aggression can also do it. This means that with imprinting in both sexes, sexual selection on its own could potentially kick start speciation."

The study, "Imprinting Sets the Stage for Speciation," was published in Nature on Oct. 2.

The study was focused on amphibians, but the results could shed light on the evolution of many other animal species with imprinting, and in general where new species come from.

"Speciation is a key process in biology that has led to the amazing diversity of species we see today. How that happens is a fundamental question in evolution and one we've been trying to answer since the time of Charles Darwin," said Richards-Zawacki.