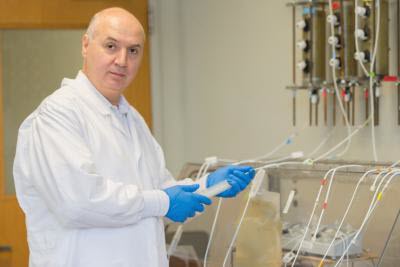 Michel BoufadelPhoto courtesy of the New Jersey Institute of TechnologyA comprehensive scientific report released Nov. 25 by The Royal Society of Canada (RSC) has concluded that there are still critical research gaps hampering efforts to both assess the environmental impacts of crude oil spills and to effectively remediate them.

The report, “The Behaviour and Environmental Impacts of Crude Oil Released into Aqueous Environments,” is designed to help the oil industry improve spill preparedness and response capabilities. It recommends prioritized research on the chemistry, properties, and spill behavior of various types of crude oil, from oil sands bitumen, to diluted bitumen, to other unconventional oils.

“There are essentially three challenge areas. We still don’t know enough about tar sand oil, or bitumen, which takes longer to break down due to its high viscosity, but doesn’t spread, we also don’t know much about the behavior of oil from a blowout, such as the Deepwater Horizon BP blowout, and we know little of how crude oil behaves in the Arctic Ocean, where there is ice, or how to remediate it,” said Michel Boufadel, director of New Jersey Institute of Technology's (NJIT) Center for Natural Resources Development and Protection and a member of the panel of experts charged with evaluating the impact of spills in Northern waters.

“Due to global warming, oil exploration in the Arctic has become feasible along with the shipment of oil through the Northwest Passage, the water body between Canada and the Arctic that used to be frozen throughout the year, but has now become open for navigation in the summer,” noted Boufadel, a professor of civil and environmental engineering who specializes in the impact of oil spills on coastal regions and, more generally, on oil behavior in diverse environments.

The panel, convened at the request of the Canadian Energy Pipeline Association and the Canadian Association of Petroleum Producers, has also recommended more research on the development and validation of spill cleanup methods that limit habitat damage and threats to wildlife, and methods to identify endpoints for cleanup operations based on habitat recovery. The panel urged more work as well to determine the environmental impact of spilled crude oil in high-risk and poorly understood areas and sensitive ecosystems, such as Arctic waters and shores, inland rivers and wetlands.

“While advances in science and technology and improved safety practices have significantly reduced the threat of oil spills in Canadian waters over the past few decades, much about the fate, environmental impacts and remediation of oil spills remain poorly understood,” said Kenneth Lee, the director of Oceans and Atmosphere, Commonwealth Scientific and Industrial Research Organization, Perth, Western Australia and chair of the seven-member panel.

Boufadel called the report an important step toward the development of informed, responsive policy around spills.

“After the Deepwater Horizon accident in the Gulf of Mexico, there was no holistic report focused on the behavior of oil spills,” he noted. “However, considering the amount of funding that emerged since then, it was timely to summarize these works and make recommendations for future directions.”

The RSC report, although focused on Canada, is directly applicable to northern U.S. states such as New York, Pennsylvania, Michigan, and Alaska, which either produce or transport large volumes of oil, Boufadel said.

Late last year, he was appointed to a National Academy of Sciences committee tasked with assessing the environmental impact of spills of the heavy Canadian crude oil known as oil sand. That committee will determine whether oil sand differs sufficiently from other crude oils transported in U.S. pipelines to warrant modifications of the regulations governing spill preparedness, response plans and cleanups.

Since its establishment in 2012, the Center for Natural Resources Development and Protection has received several major grants from the federal government, as well as international institutions and agencies, to investigate oil behaviors in the environment. Boufadel provided technical analyses and remedial strategies in response to the two largest oil spills in U.S. history, the Deepwater Horizon and Exxon Valdez spills.