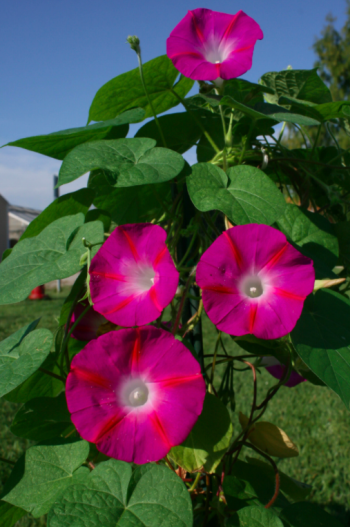 Morning glories growing outside at the University of Michigan’s Matthaei Botanical Gardens.Photo credit: Malia SantoANN ARBOR—Herbicide-resistant "superweeds" change their mating strategies over time, an evolutionary shift that helps them hold onto valuable genes and outcompete other plants, according to a new study from University of Michigan researchers.

The study examined the relationships between plant mating systems and herbicide resistance in the common agricultural weed morning glory. The researchers found that morning glory populations that have evolved resistance to the herbicide Roundup rely on self-fertilization more than susceptible populations do.

The increased reliance on self-fertilization may help perpetuate Roundup resistance by blocking the flow herbicide-susceptibility genes from other plants, the researchers concluded.

The results highlight the potential unforeseen consequences of human activities—in this case the widespread use of Roundup Ready crops, which are genetically modified to tolerate the herbicide—on wild plants such as weeds.

"We need to fully understand how we are altering plant species through the use of agricultural chemicals. What kind of evolution are we causing due to impacts that we didn't quite foresee?" said U-M plant ecological geneticist Regina Baucom, senior author of a paper published online on Nov. 30 in the journal Ecology Letters.

"This is further evidence that human activities can have unintended impacts on plant populations, in this case changes in traits that we weren't necessarily anticipating might evolve," said Baucom, an assistant professor in the Department of Ecology and Evolutionary Biology.

Baucom's team, which includes Shu-Mei Chang of the University of Georgia, sampled 32 morning glory populations growing in and around corn and soybean fields in the U.S. Midwest and Southeast. The researchers used a combination of lab and greenhouse studies.

Morning glories in agricultural fields have been consistently exposed to glyphosate, the active ingredient in the herbicide Roundup, since Roundup Ready crops were widely adopted in the United States in the late 1990s. Baucom's team had previously shown that this colorful flowering weed has developed varying levels of resistance to glyphosate across its North American range.

Morning glory is a mixed-mating species, meaning that individual flowers can reproduce either by self-fertilization, which is known as selfing, or by using pollen from another individual, a process called outcrossing. 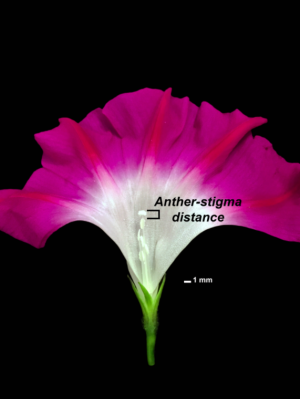 In the Ecology Letters paper, Baucom and her colleagues show that herbicide-resistant morning glory populations self-fertilize more than herbicide-susceptible populations.

The researchers also show that in the most-resistant morning glory populations, the distance between the anther and stigma is the smallest, a trait previously shown by Chang to increase self-fertilization in this species.

The increased reliance on self-fertilization and the shrinking anther-stigma distance both have the effect of perpetuating resistance genes by blocking the influx of herbicide-susceptibility genes from other plants.

"We are the first to show that the mating system of an agricultural weed is correlated to the level of herbicide resistance—the more highly resistant populations are also more selfing," Baucom said. "In addition, we believe we have identified a physical mechanism that may allow plants to hold onto resistance genes through higher selfing."

Classic work by biologist Janis Antonovics in the late 1960s and early 1970s showed that grass plants tolerant to heavy metal-contaminated soils exhibit higher rates of self-pollination than non-adapted grass plants. Theoretical work by Antonovics and his colleagues suggested that higher rates of selfing in metal-tolerant plant populations should evolve to reduce the inflow of non-adapted genes, an idea they called the prevention of gene flow hypothesis.

The findings of Baucom and her colleagues support that hypothesis and, as an extension to the earlier work, may provide a mechanism behind the increased rate of selfing: decreased anther-stigma distance.

In the United States, 40 percent of the pesticides applied across 400 million acres of cropland are herbicides. Worldwide, herbicide resistance has evolved in more than 200 plant species.

The first author of the Ecology Letters paper is U-M postdoctoral researcher Adam Kuester. The other author is U-M undergraduate Eva Fall. The work was funded by a grant from the U.S. Department of Agriculture's National Institute of Food and Agriculture.