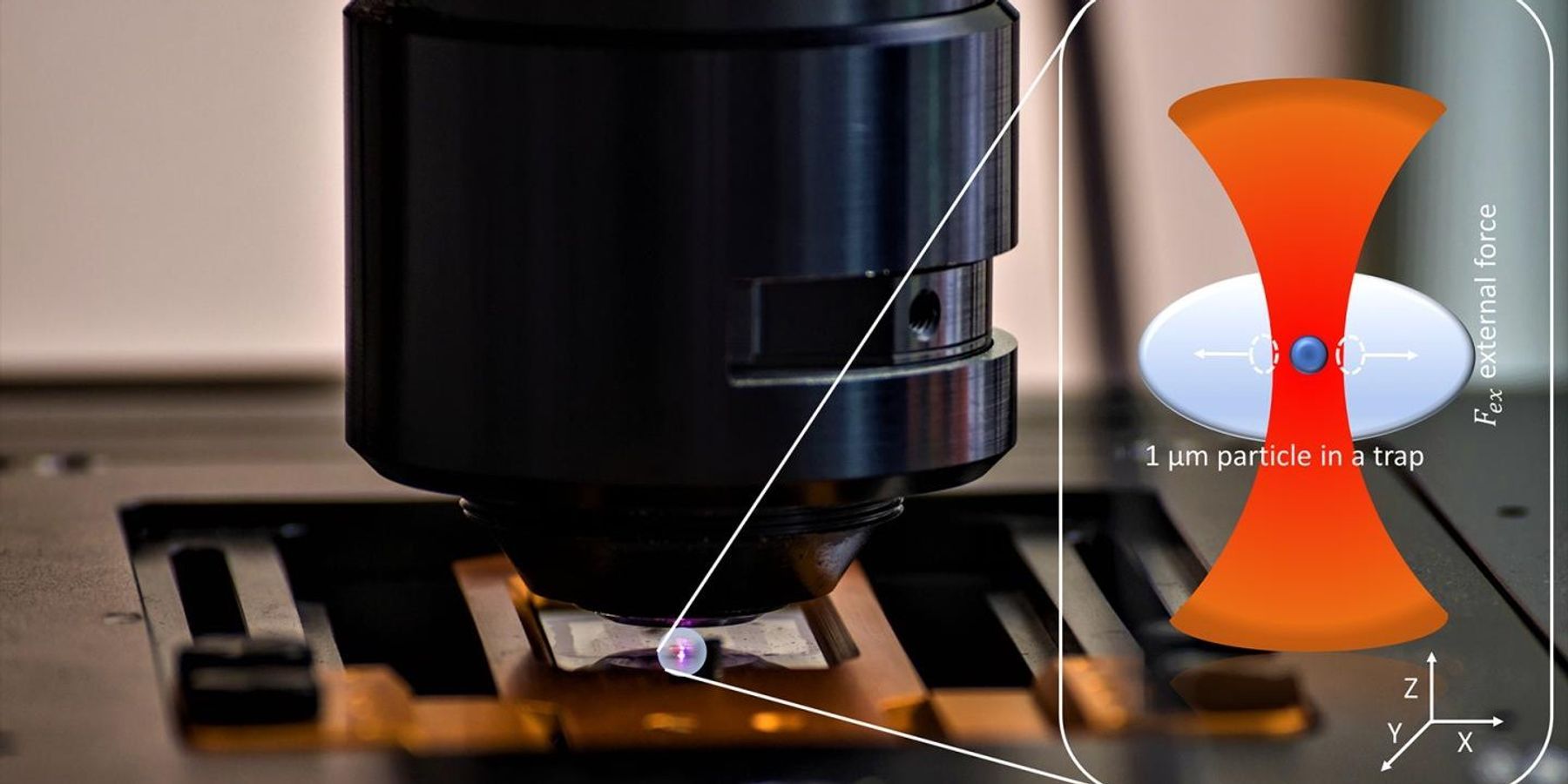 A microparticle held with optical tweezers in the microscope. Inset: Illustration of the held particle (magnified); shown in red is the light of the infrared laser used.
Pascal Runde

Measurements of biomechanical properties inside living cells require minimally invasive methods, making optical tweezers particularly attractive as a tool. It uses the momentum of light to trap and manipulate micro- or nanoscale particles. A team of researchers led by Dr. Cornelia Denz from the University of Münster (Germany) has now developed a simplified method to perform the necessary calibration of the optical tweezers in the system under investigation. Scientists from the University of Pavia in Italy were also involved. The results of the study have been published in the journal Scientific Reports.

The calibration ensures that measurements of different samples and with different devices are comparable. One of the most promising techniques for calibrating optical tweezers in a viscoelastic medium is the so-called active-passive calibration. This involves determining the deformability of the sample under investigation and the force of the optical tweezers. The research team has now further improved this method so that the measurement time is reduced to just a few seconds. The optimized method thus offers the possibility of characterizing dynamic processes of living cells. These cannot be studied with longer measurements because the cells reorganize themselves during the measurement and change their properties. In addition, the shortening of the measurement time also helps to reduce the risk of damage to the biological samples due to light-induced heating.

In simplified terms, the underlying procedure to perform the calibration works as follows: The micro- or nanometer-sized particles are embedded in a viscoelastic sample held on the stage of a microscope. Rapid and precise nanometer-scale displacements of the specimen stage cause the optically trapped particle to oscillate. By measuring the refracted laser light, changes in the sample's position can be recorded, and in this way, conclusions can be drawn about its properties, such as stiffness. This is usually done sequentially at different oscillation frequencies. The team led by Denz and Randhir Kumar, a doctoral student in the Münster research group, now performed the measurement at several frequencies simultaneously for a wide frequency range. This multifrequency method leads to a shortened measurement time of a few seconds. The scientists used solutions of methyl cellulose in water at different concentrations as samples. These have a similar viscoelasticity to living cells.

Biomechanical properties such as stiffness, viscosity, and viscoelasticity of living cells and tissues play a crucial role in many vital cellular functions such as cell division, cell migration, cell differentiation, and tissue patterning. These properties of living cells could also serve as indicators of disease progression. For example, the onset and development of cancer is typically accompanied by changes in cell stiffness, viscosity, and viscoelasticity.