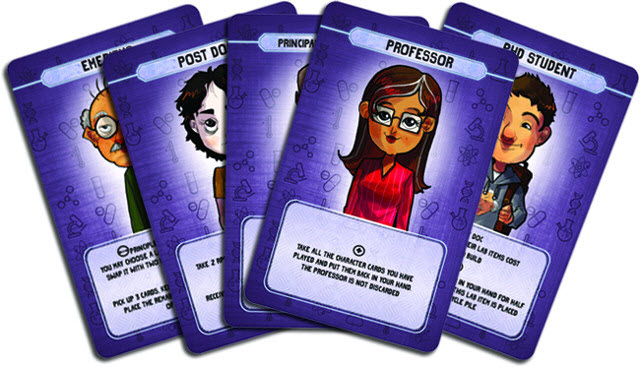 Would you poison a competing scientist’s tea? Steal another lab’s research secrets? You can, in a card game being developed by Caezar Al-Jassar and Kuly Heer.

Al-Jassar, a structural biologist at the MRC Laboratory of Molecular Biology, and Heer, a psychologist at the University of Hertfordshire, enjoy playing games when they’re not in the lab. Inspired by anecdotes told to them by friends and colleagues as well as stories reported in Michael Brooks’s 2013 book Free Radicals: The Secret Anarchy of Science, the pair decided to create a game of their own while on holiday in Spain last summer.

“Lab Wars,” which is suitable for both scientists and nonscientists, over-exaggerates the realities of lab life, with a focus on career-building and competition. Players adopt characters—a grad student, postdoc, professor, or lab tech, among others—and scheme to gain academic prestige.

When Al-Jassar and Heer first demoed the game, at a December tabletop gaming convention called Dragonmeet, one man returned to the Lab Wars booth twice—first with his son, and then with his daughter. “He wanted to show them what science was like,” Al-Jassar told The Scientist. “Everyone has this notion that scientists are all good people and trying to do good for humanity, but there’s also this very small minority [who] have a dark side and try to screw each other over.”

“Often, it’s academic rivalry” that leads scientists to misbehave, said Brooks. “There’s no prize for second place in science—that’s one of the big problems. Sometimes people are willing to go the extra mile [to win].”

The ability to sabotage competing players ranked highest in evaluations by testers of early prototypes of the game. “Play testers liked that the fact it’s grounded in reality,” said Al-Jassar. “The actions they were playing in the game are [predominantly] based in real-life events.”

There are cards for espionage, tampering with another player’s lab equipment, and so on. Points are awarded for such sabotage. Then there are the personal conflicts: the department’s emeritus professor blocks a principal investigator from attaining full professorship; a new graduate student demands a postdoc’s time for training. But it’s not all cutthroat: players may be dealt “fortuitous finds” and participate in teambuilding, earning them additional points.

Al-Jassar and Heer plan to initiate a Kickstarter fundraising campaign in June. If successful, they hope to deliver Lab Wars to supporters by the end of the year.

“People think science is a nonhuman endeavor. It’s almost robotic in people’s minds: you have a hypothesis, then you do an experiment, and then your data comes out. Of course it’s not like that, this is human beings at work,” said Brooks. “Human beings are fiercely competitive. . . . So I’m not surprised at all that people enjoy watching scientists compete with each other, that they like them to play a bit dirty.”

- This article was originally published on January 29, 2016 in our sister publication, The Scientist