Ever since the discovery of X-rays in 1895, their ability to reveal things hidden to the human eye has created endless opportunities. But X-rays by far aren’t the only option to see the world with different eyes. Researchers hope to make better use of a different form of light, called terahertz radiation, which has broad applications in science, radar, security, medicine, and communications.

“Terahertz technology has a lot of prospect for innovation,” says Filippos Toufexis, a graduate student at the Department of Energy’s SLAC National Accelerator Laboratory and Stanford University. “Yet, it has been exploited only very little due to a lack of suitable radiation sources, particularly for applications that require them to have a small footprint and high output power.”

In a recent paper, published in Applied Physics Letters, Toufexis and his colleagues described an approach that could aid the development of future terahertz sources. 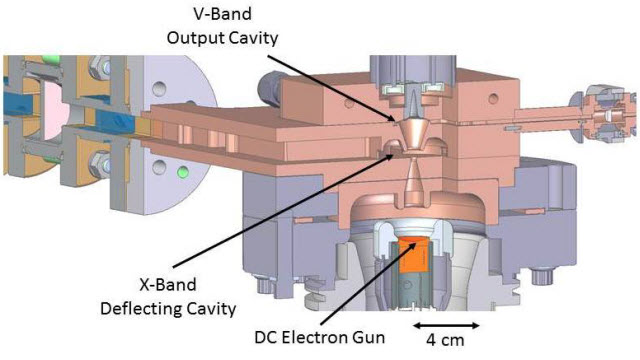 With wavelengths ranging from one-tenth of a millimeter to a few millimeters, terahertz light is several hundred times less energetic than visible light and occupies a middle ground between infrared radiation and microwaves. It could be used in radars to detect small objects, such as space debris. Or it could be used in navigation systems, security scanners and devices that search for explosives and drugs. In medicine, it has been used as an alternative to X-rays in some areas, such as 3-D imaging of teeth. Terahertz radiation could also be used in communications, where it would enable high data transfer rates.

However, there are only few options for terahertz sources, which are often not very practical. Some require large superconducting magnets or use giant particle accelerators, others produce radiation that is not powerful enough.

However, making these cavities very small has several unwanted side effects, including a drop in output power and issues with heating and manufacturing.

“Our design eliminates these issues because it uses a cavity that is very large compared to the wavelength it produces and because it has a wide opening at one end,” Toufexis says. “It also doesn’t use magnets and is relatively small.” 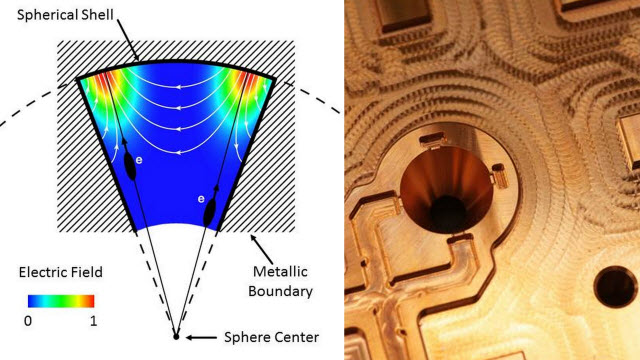 At left: Cross section of the output cavity of a new source of millimeter waves at SLAC, showing the electric field and the cavity’s particular geometry. At right: Photo of the cavity’s top before assembly with the spherical shell seen at left.Image credit: Filippos Toufexis/John Van Pelt/SLAC National Accelerator Laboratory

In fact, the new device has two different cavities.

The first cavity uses microwaves to deflect an electron beam coming from an “electron gun,” forcing it onto a corkscrew-like path into the second cavity—the one with the wide opening. As the result, the deflected beam appears to be rotating along that opening.

A new source of millimeter wave radiation, developed at SLAC, uses two metallic cavities—one operating at a low frequency to deflect an electron beam and another to extract power from it at a higher frequency. This simulation shows the electron beam flight path through the cavities. Video credit: Filippos Toufexis/SLAC National Accelerator Laboratory

The electron beam excites a rotating electromagnetic field in the second cavity, which generates the output radiation. Since beam and field move synchronously along the rim, the field can continuously draw energy from the beam.

The traveling field is known as a “whispering gallery” mode because it has an analogy in acoustics. The effect occurs, for instance, in St. Paul’s Cathedral in London, where whispers—soundwaves—travel around a gallery beneath the cathedral’s dome and can be clearly heard anywhere on the gallery.

A new source of millimeter wave radiation, developed at SLAC, uses two metallic cavities—one operating at a low frequency to deflect an electron beam and another to extract power from it at a higher frequency. This simulation shows the rotating electric field at the output cavity when excited by a rotating electron beam. Video credit: Filippos Toufexis/SLAC National Accelerator Laboratory

Due to its particular shape, the second cavity produces radiation with a wavelength five times shorter than the microwave radiation that goes into the first cavity, shifting the output wavelength toward the terahertz region.

From Proof of Principle to Application

In experiments at SLAC’s Klystron Test Lab, the device, for which the researchers obtained a provisional patent, produced stable radiation with a wavelength of about 5 millimeters and an output power of 50 watts. Calculations show that the source even has the potential to produce radiation that is 1,000 times more powerful.

However, more development work is needed to push the technology into the terahertz region with wavelengths of about a millimeter, says SLAC accelerator scientist Sami Tantawi, who had the idea for the new design, which borrows elements from an established method for the generation of radiation with longer wavelengths. 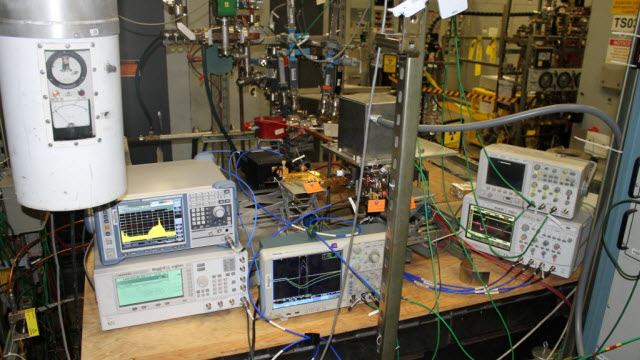 “Our proof-of-principle experiment shows that we can, in principle, use vacuum electronics to produce radiation with much shorter wavelengths,” he says. “But it also showed many difficulties in controlling the manufacturing process of our apparatus and achieving the desired outcome. We’re working diligently on developing better simulation codes that will allow us to address these issues, improve our design and advance the technology.”

The mechanical designs for the radiation source were done by Dymenso, a San Francisco-based company. Funding for this work came from the DOE Office of Science, the National Science Foundation and SLAC’s Laboratory Directed Research and Development (LDRD) Program.